KINGS CANYON NATIONAL PARK — More than 120 visitors and staff who became snowbound in a Sierra Nevada resort due to recent storms have been freed.

The U.S. Forest Service says snow trapped the guests and staff on Sunday at a lodge at Montecito Sequoia Lodge in Kings Canyon National Park.

A Forest Service statement says crews traveled by snowmobile to the lodge Wednesday morning to ensure everyone was safe and then returned Thursday with supplies.

Heavy equipment and crews then cleared eight miles of snow, including drifts of up to 7 feet high, and more than 20 fallen trees on Generals Highway.

Though some got bored during the snow-in, said U.S. Forest spokeswoman Alicia Embrey, the lodge had enough food, fuel, and general supplies to keep everyone comfortable.

“Physically they were fine,” Embrey said. “They were obviously happy to go home.”

Joel Keeler posted several videos of his experience at the lodge on Twitter starting Tuesday, when the snow was still coming down and guests learned they still weren’t going to be able to leave.

The next day, he posted: “It’s cold, clear and beautiful, but we’re still snowed in!”

“They are working hard to clear the road … Still a lot of driveway left tho!” he wrote.

Update: it’s cold, clear, and beautiful, but we’re still snowed in! Some hope remains that we get out today. They are working hard to clear the road with their 2 Bobcats. Still a lot of driveway left tho! Then hopefully the park service plows the miles of road out from there… pic.twitter.com/1wd1NNiZbt

On Thursday, he posted that guests were finally going to go home, sharing video of the cleared roadway and a caravan of dozens of snow-capped vehicles snaking their way out next to towering snowbanks.

The snow that trapped the guests began falling Friday, blanketing the area with between 4 to 7 feet by Saturday night, Embrey said, adding that roads to the lodge were closed by Saturday afternoon. 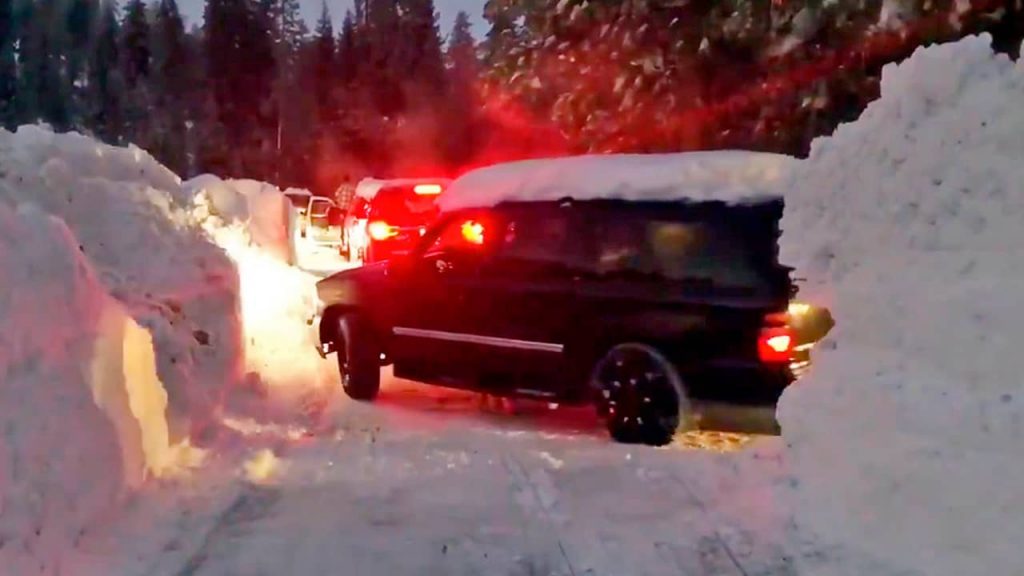 Snow Will Continue Through Weekend

More snow is headed to the Sierra.

The National Weather Service in Hanford has issued a Winter Storm Watch advisory for the Sierra from Yosemite to the Kern County line. The advisory will go into effect at 4 p.m. today and expire at 4 a.m. Monday morning. Up to 2 feet of snow is forecast. 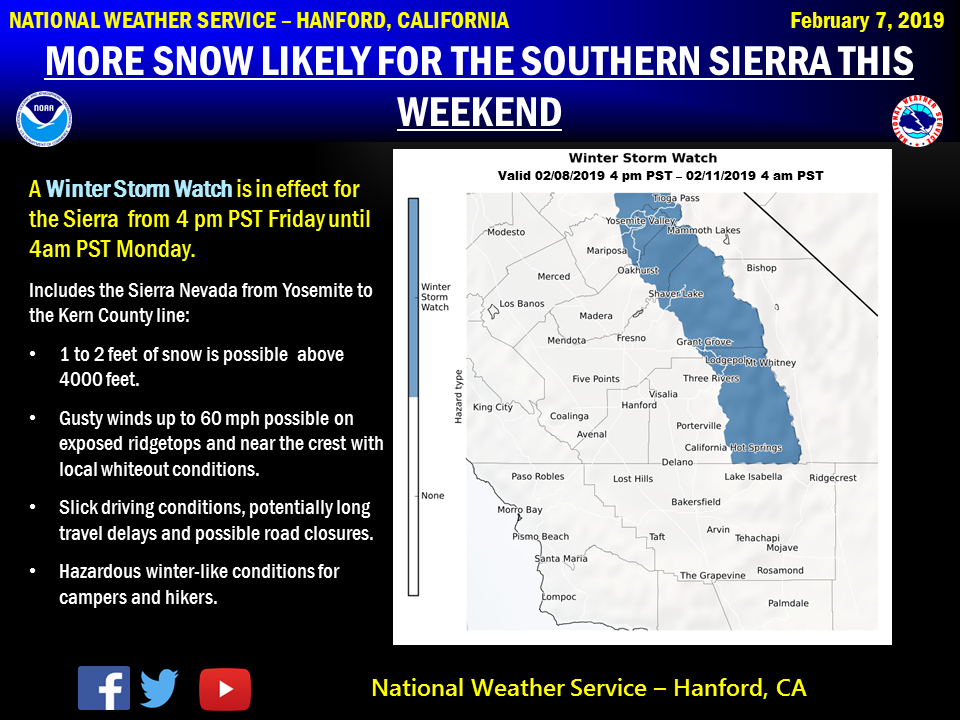 The Forest Service urged visitors to travel with extreme caution.

“The most recent storm has left very little room to maneuver and nowhere to put new snow,” Ned Kelleher, chief ranger for Sequoia and Kings Canyon national parks, said in a statement.

He added: “The trees are snow and ice laden and the accumulating new snow will cause failures.”

Another zoomed in #snow cover comparison across The Sierra last year at this time vs this year. 2018 Statewide SWE 26% of normal to date, this year 125%. #winter #cawx #nvwx pic.twitter.com/67quzepUel