With No Answer to Queta, Bulldogs Lose Nail-Biter to Utah State 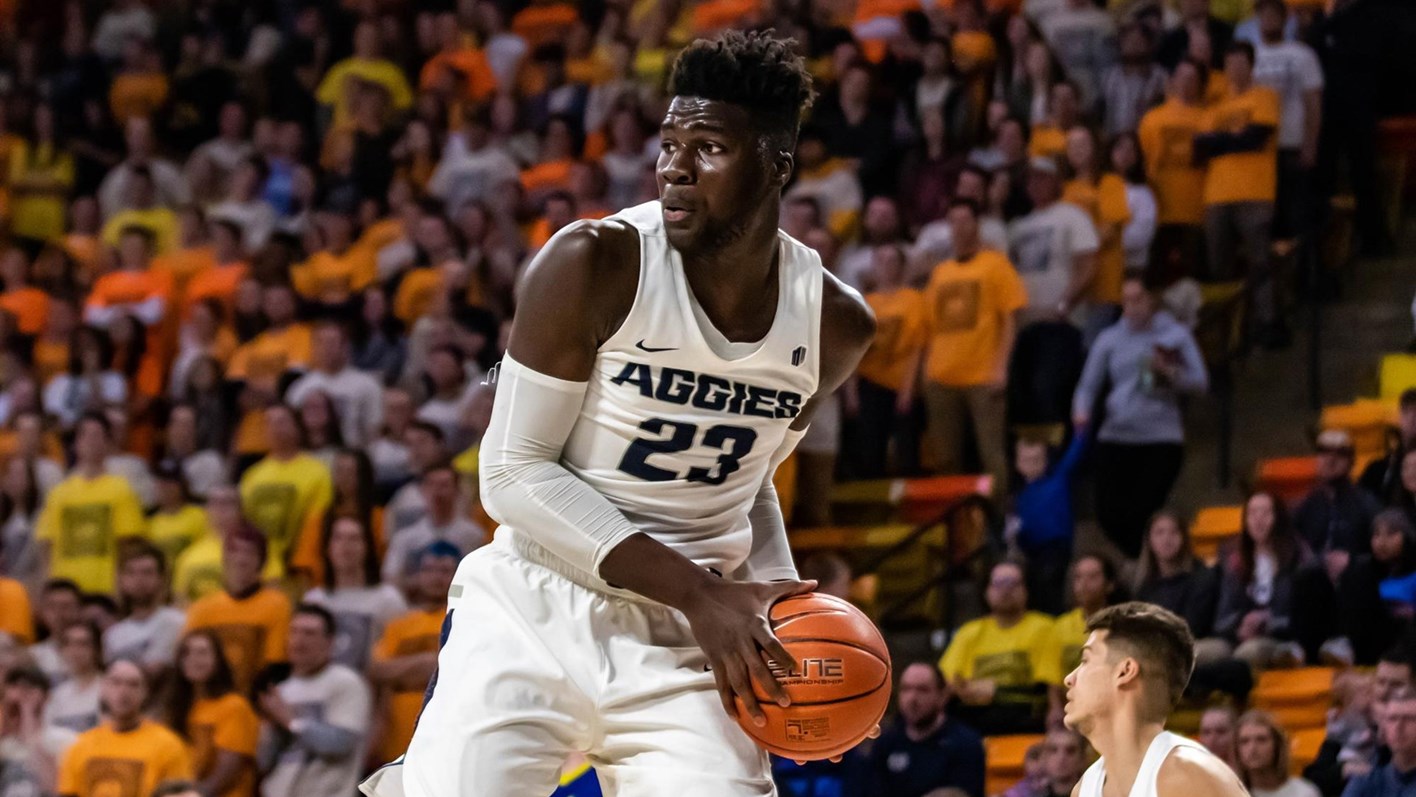 The Fresno State men’s basketball team has found ways all season long to overcome a lack of height along its front line.
Strong outside shooting, tenacious defense, and unselfish play have carried the Bulldogs to what thus far has been a banner campaign.
But Coach Justin Hutson’s team came up with no answer for Utah State’s 6-foot, 11-inch freshman center, Neemias Queta, on Tuesday night at the Save Mart Center.
The result: an 82-81 Utah State victory that avenged the Bulldogs’ 78-77 victory over the Aggies a month ago in Logan. The teams now have played 80 minutes against each other and are knotted at 159-159 with a victory apiece.

Sam Merrill led the Aggies with 20 points. But Queta was the dominant force with 18 points, 15 rebounds, six assists, and four blocked shots in 32 minutes of action.
Queta even made a 3-pointer while converting 8 of 9 shots from the field. Despite being the focal point of the offense he didn’t commit a turnover. For the season, the Portugal native is averaging 11.1 points and 9.1 rebounds a game.
The victory moved Utah State (18-5, 8-2) into sole possession of second place in the Mountain West Conference. The Bulldogs fell to third place at 7-3. They are 16-6 overall.  Sixth-ranked Nevada (8-1, 21-1) leads the conference.

Fresno State again fell behind early, trailing 20-7 at one point, only to rally in the second half.
Sam Bittner nailed a 3-pointer to give Fresno State a 67-64 lead with 8 minutes, 22 seconds left in the game, pumping life into the crowd of 5,091.
But  Abel Porter pulled the Aggies even with a 3-pointer and made 1 of 2 free throws. Queta followed with a dunk and Brock Miller hit a deep 3-pointer to cap a 9-0 run that gave Utah State the lead for good.
The challenge for Hutson perhaps is to find a way for the Bulldogs to play better at the start of games and not get themselves in a hole.
“It is interesting to see the way that our guys fight back. We start making the extra pass, start making big shots at times and our defensive intensity continues to go up,” Hutson said. “It is something that every coach strives for. As we dig deeper into this conference, I think our players understand how hard we need to play now. Our next step is realizing how hard we need to play for 40 minutes.”

Another takeaway: Utah State will struggle to contain Bulldogs’ senior guard Braxton Huggins should the teams meet in the Mountain West Tournament.
Huggins scored a career-high 33 points and made the game-winning 3 in Logan. Tuesday night, he led Fresno State with 26 points and six rebounds.
The Bulldogs lost despite shooting 49.2 percent from the field, including 44.4 percent from beyond the 3-point arc. The Aggies were even hotter. They converted 54.5% from the field and 46.2% from 3-point range.
“There are some good teams in this conference and things start to change at this point,” Hutson said. “Some teams may give up some games towards the end and some may rejuvenate themselves and be better. We know Utah State, they are at the top of the conference for a reason. They have a great shot blocker, a great guard, and they were tough to handle tonight.”

Have You Seen the Video of Snowy Yosemite Rock Slide?