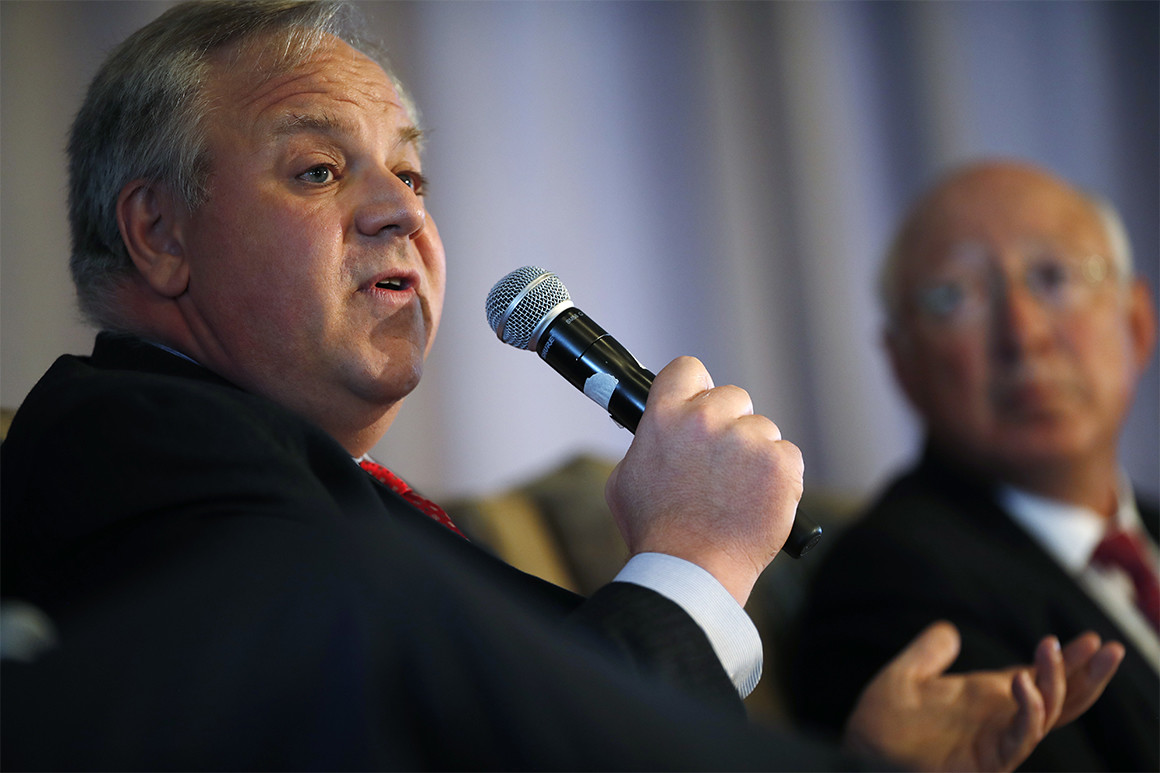 Trump tweeted Monday that Bernhardt “has done a fantastic job from the day he arrived.”

In a statement, Bernhardt called it a “humbling privilege to be nominated to lead a department whose mission I love, to accomplish the balanced, commonsense vision of our president.”
Bernhardt’s reputation as a technocrat working efficiently behind the scenes stands as a 180-degree turn from that of his flamboyant predecessor. Zinke grabbed attention when he rode a horse to his first day at Interior. Zinke soon was garnering headlines over allegations involving travel and allegations of possible conflicts of interest.
Bernhardt has remained low-profile as Trump weighed him and a half-dozen other reported contenders — chiefly, Western lawmakers — as successors to Zinke.
As acting secretary, Bernhardt drew criticism in recent weeks from environmental groups, tribes, and others for continuing to process paperwork for oil and gas projects while other agencies were closed for routine work during this winter’s partial government shutdown.
The Interior Department called its effort important to bolstering U.S. energy independence.

“Bernhardt got this nomination as a reward for months of work cramming America’s natural heritage into a wood chipper,” said Kieran Suckling, executive director of the Center for Biological Diversity advocacy group, one of many environmental organizations condemning Trump’s intended nomination. “Confirming him as Interior secretary would be a boon to polluters and a colossal disaster for our public lands and endangered species.”
“Bernhardt might as well be an ideological clone of Ryan Zinke,” Ana Unruh Cohen of the Natural Resources Defense Council told The Sacramento Bee. She called Bernhardt “another industry shill who will continue to sell our precious natural resources to the highest bidders for exploitation.”
Rep. Raul Grijalva, D-Ariz., chairman of the House Natural Resources Committee, said lawmakers would be watching to see whether Bernhardt’s former industry ties were influencing his policy decisions.
“David Bernhardt spent much of his career lobbying for fossil fuel and agricultural interests, and the president putting him in charge of regulating his former clients is a perfect example of everything wrong with this administration,” Grijalva said in a statement.

Republican lawmakers praised Trump’s pick.
“David Bernhardt … brings tremendous leadership with him from our home state of #Colorado and I look forward to a swift confirmation process,” Rep. Ken Buck tweeted.
Bernhardt, who is from Colorado, first served in Interior as a political appointee under President George W. Bush, becoming the agency’s top lawyer.

Bernhardt has worked as a lobbyist and lawyer for several oil and gas companies and other interests that sometimes have regulatory matters before the department.
He is a former lobbyist for Fresno-based Westlands Water District, which is the nation’s largest irrigation district. It serves farmers in Fresno and Kings counties.
Coming back to Interior as Zinke’s deputy, Bernhardt recused himself from decisions involving a long list of former industry clients to avoid conflicts of interest under ethics rules.
Republicans say Bernhardt’s revolving-door experience makes him an informed regulator in matters before the agency. Democrats and environmental groups say he’s vulnerable to conflicts of interest.
Under the leadership of Zinke and Bernhardt, the Interior Department has pushed to open more Alaskan wilderness and offshore waters to oil and gas development.