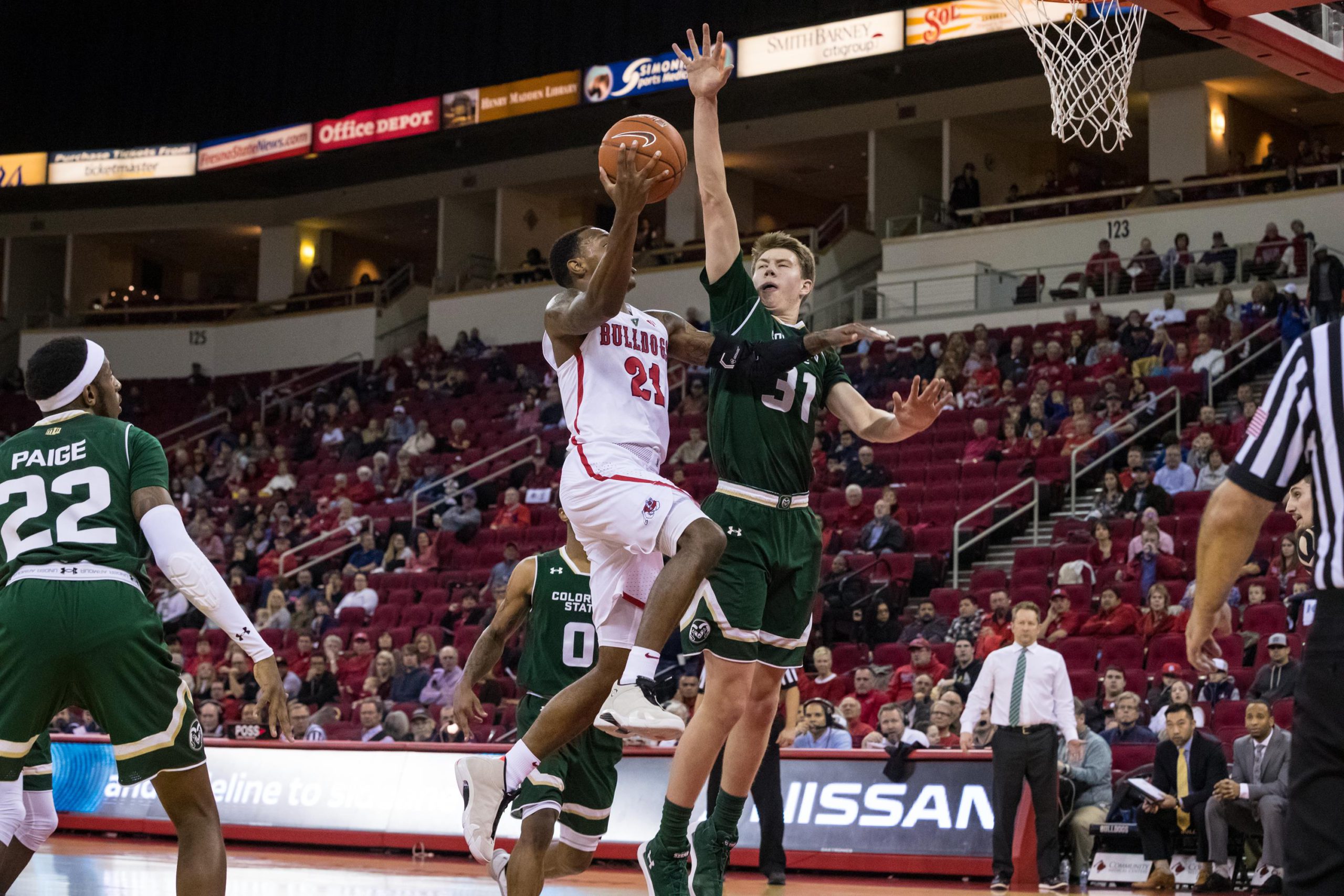 The Fresno State men’s basketball didn’t pull off a miracle this time.
No road magic. No tenacious defense. No capitalizing on an opponent’s mistakes.
Fresno State fell to Colorado State on Saturday in Fort Collins — and out of a share of the Mountain West Conference lead.
J.D. Paige scored 17 points, Kendle Moore had 16 points with seven rebounds as the Rams defeated the Bulldogs 74-65.

Hutson: ‘We Had a Chance’

“They came out at the start of the game and at the start of the second half and took it to us and took too big of a lead for us to overcome,” Bulldogs coach Justin Hutson said. “We didn’t get a lot of production, but we still had a chance. We had a chance to make it a one-possession.”
The loss dropped Fresno State to 5-2 in conference and 14-5 overall.
The Bulldogs had come from behind in posting conference victories over Utah State, Boise State, and San Diego State.

Taylor, Grimes and Little Else

The Bulldogs got 24 points, seven assists and six rebounds from Deshon Taylor, and little from everyone else except Nate Grimes (16 points, 12 rebounds). Taylor made 5-of-9 3-pointers and 5-of-7 free throws.
With Colorado State converting just 18 of 32 free throws, Fresno State had a golden opportunity to remain unbeaten on the road in conference play. In addition, the Bulldogs outscored the Rams 23-4 in second-chance points. The Rams, however, made 10 of 20 shots from 3-point range.

Wyoming, New Mexico Next Up for Bulldogs

Now Fresno State has to regroup quickly. It plays at Wyoming (5-15, 1-6), which is 4-6 at home this season. The Bulldogs face New Mexico (3-5, 9-11) Saturday at the Save Mart Center.
Colorado State went up by 10 points early in the second half and maintained a double-digit lead into the final six minutes. A 12-3 run by Fresno State pulled the Bulldogs to within five at 65-60 with 2 minutes, 55 seconds remaining. But Moore’s 3-point play gave Colorado State a 70-63 lead with 49 seconds left.
Hyron Edwards scored 12 points and Nico Carvacho contributed nine points and 14 rebounds for Colorado State (8-12, 3-4). Kris Martin added 11 points, six rebounds, and five assists. The Rams made 10 of 20 shots from 3-point range.
Fresno State defeated Colorado State 78-67 in their first meeting of the season.

Bulldogs Are the Champions of California College Football