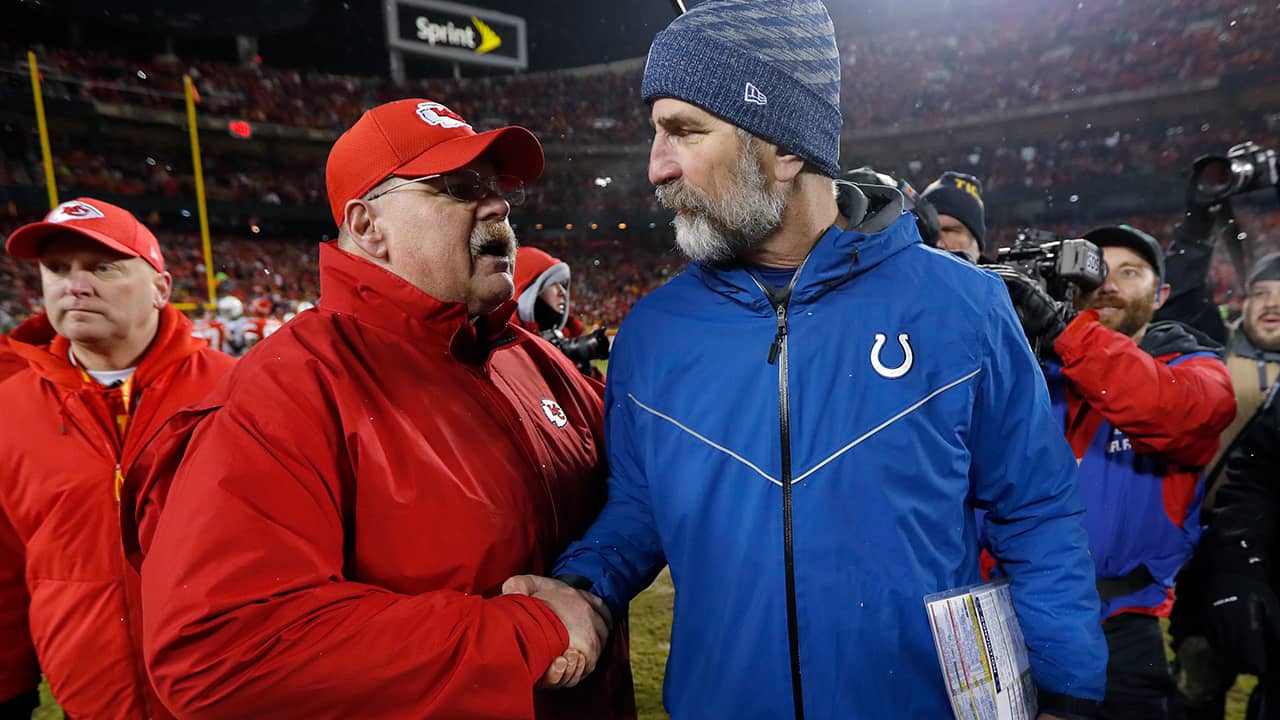 KANSAS CITY, Mo. — Andy Reid sat inside an opulent suite high above the field in Arrowhead Stadium six years ago, a sparkle in his eyes and a broad smile hiding underneath his bushy, red mustache.
He had just been fired by the Philadelphia Eagles after a mostly successful 14-year run highlighted by a Super Bowl appearance, and by all accounts he should have been weary and beaten. But he was instead wired and buoyant, eager to take on the vast rebuilding job of the Kansas City Chiefs.
Eager to answer the critics that claimed he lost it those final years in Philly.
Eager to prove to everyone that he can win the big game.
Now, the affable coach with the self-deprecating sense of humor has the Chiefs one game away from playing in their first Super Bowl in 49 years.
Standing in the way are the New England Patriots, a team that has ruined Reid’s postseason dreams on multiple occasions, but who will have to earn their own trip back to the Super Bowl by beating the AFC’s top seed on the road Sunday.

Twice His Chiefs Teams Have Lost by One Point


“I think this is big for our fans. It’s big for our family. There’s a lot that goes into it, from the head coach’s standpoint to the players’ standpoint.” — Andy Reid, Kansas City Chiefs coach
“There’s going to be a lot of distractions here,” he added. “It’s important to focus on the job.”
It’s the job Reid sought when he signed on in 2013, taking over a franchise coming off a two-win season and marked by on- and off-field misery. And getting to this point hasn’t been easy, either, with more playoff disappointments marking his first five seasons.
Twice his Chiefs teams have lost by one point, and once by two, when the Steelers beat them in the divisional round at Arrowhead Stadium in a game in which Pittsburgh never scored a touchdown.
Twice they’ve blown 18-point leads, something that has only happened two other times in NFL history.
Three years ago, the Chiefs finally won their first playoff game in more than two decades only to blow their shot at the AFC title game in New England. The Chiefs trailed by 14 in the fourth quarter, but used 16 plays to score the first of two touchdowns they needed, and ultimately ran out of time.

Reid Has Had Plenty of Learning Opportunities

“I don’t get caught up in any of that,” said Reid, who even after a 31-13 win over the Colts on Saturday is just 2-4 in the playoffs with Kansas City. “I’m into history — I love history — but only if it makes you better. You learn from it and move forward. That’s the important thing.”
To be sure, Reid has had plenty of learning opportunities.
He’s been in 25 playoff games over the course of 20 seasons as a head coach, the most of anybody without winning the Super Bowl.
In fact, his one Super Bowl appearance — when the Eagles were beaten by Bill Belichick and the Patriots in 2005 — is the fewest of any coach with 20 playoff games.
That loss to the Patriots, of course, was as deflating as any postseason defeat.
The Eagles trailed that game by 10 points late, but used up several precious minutes with a series of short passing plays to get the touchdown they needed. They were left with little time to march for the tying field goal, and Reid was saddled with criticism for his poor time management.
It has turned out to be a criticism that has haunted Reid most of his career.

Reid Has Always Been Considered a Players’ Coach

His guys have never been on board with it, though. Reid has always been considered a players’ coach, passing on the praise and shouldering the blame, whether it was during his days as an assistant coach in Green Bay or when he was leading Philadelphia to a series of NFC title games.