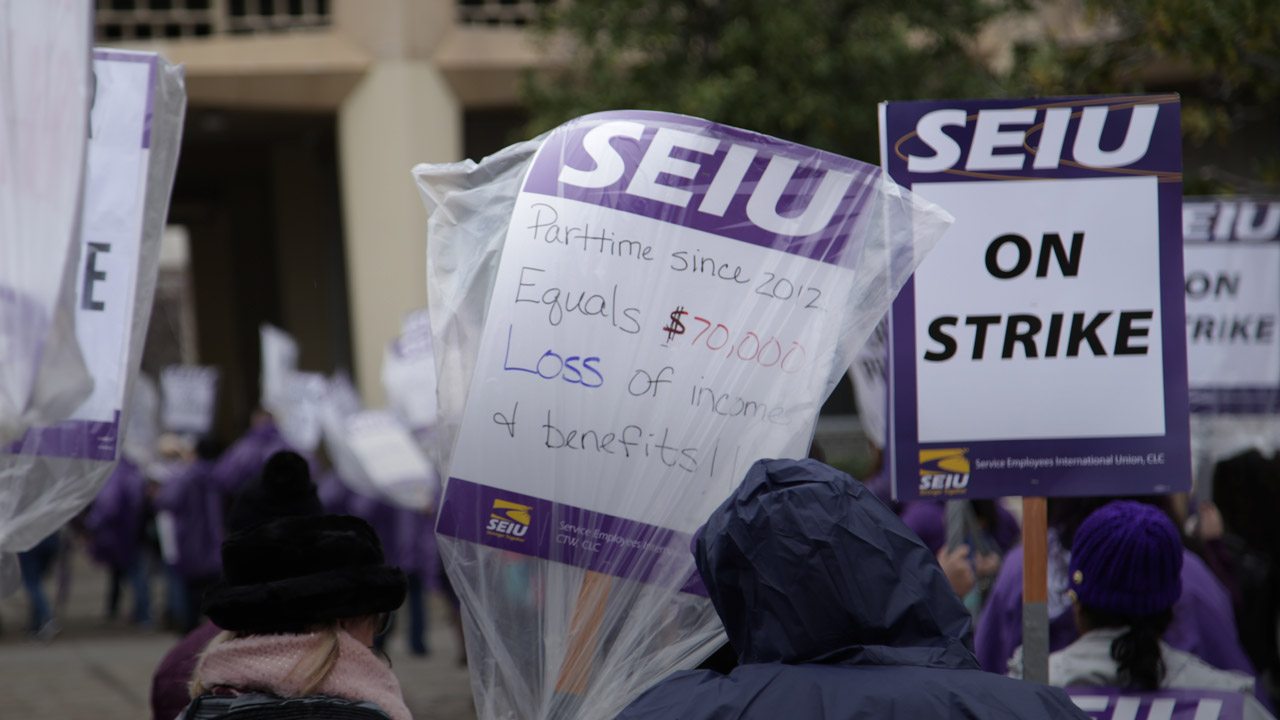 Fresno Superior Court still operated Tuesday (Jan. 15), but it was anything but normal.
Outside, a constant drizzle did not deter hundreds of striking court workers — judicial assistants, clerks, and court reporters.

“Rain or shine, we stay on the line,” was one of the many mantras SEIU 521 members chanted. 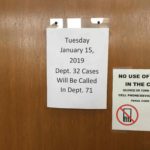 Inside, many courtrooms were closed — cases consolidated to just a few judges for the day.
At the criminal courthouse, only two of the 28 courtrooms were in use during the 11 a.m. hour, both on the seventh floor.
Things were packed in the rooms of Judge Gary Hoff and Jon Conklin. Some bailiffs told GV Wire that instead of hearing five cases at a time, they stuffed 15 prisoners in the room.
Just a few blocks away at civil court, the shortage of workers led to many closed courtrooms. Things were operating as normal when business did take place.
The line was long at the family clerk’s office, where only a few windows were open. That is not necessarily uncommon. Over at the civil clerk’s office, nearly every window was open and no one was in line.
Judge David Kalemkarian heard a paternity law case in Dept. 203. On the floor above, newly minted arbiter Judge Heather Jones was waiting on an interpreter.
Next door, her husband, Samuel Dalesandro, was between cases. He deferred any questions about how court was going to a court spokesperson.
But, the court administration was shy. It did not respond to GV Wire’s request for comment.
That wasn’t a problem with the strikers outside. The energy level remained high, from 7:30 a.m., until they took a Me-n-Ed’s pizza break for lunch.
Then, the purple-clad group resumed, marching around the criminal courthouse as if it was the Walls of Jericho. Instead of a trumpet, they had their chants. 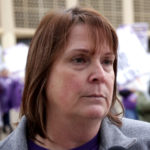 Fresno has $1 million to spend on parks, and the council will hear a priority list at its meeting Thursday (Jan. 17).
The money was set aside from the budget for one-time improvements. However, this barely qualifies as a drop in the bucket. Last year’s parks master plan identified $112 million in improvements.
The largest expenditure, proposed by the parks department, is soccer field lighting at Al Radka Park for $300,000.
The requests, covering six parks: 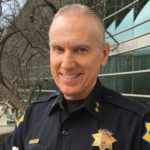 Acting Fresno Police Chief Patrick Farmer is the man in charge while Chief Jerry Dyer recovers from back surgery.
Dyer underwent the surgery in late December. Many around City Hall and at police headquarters expect Dyer to be back next month. 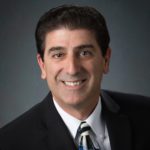