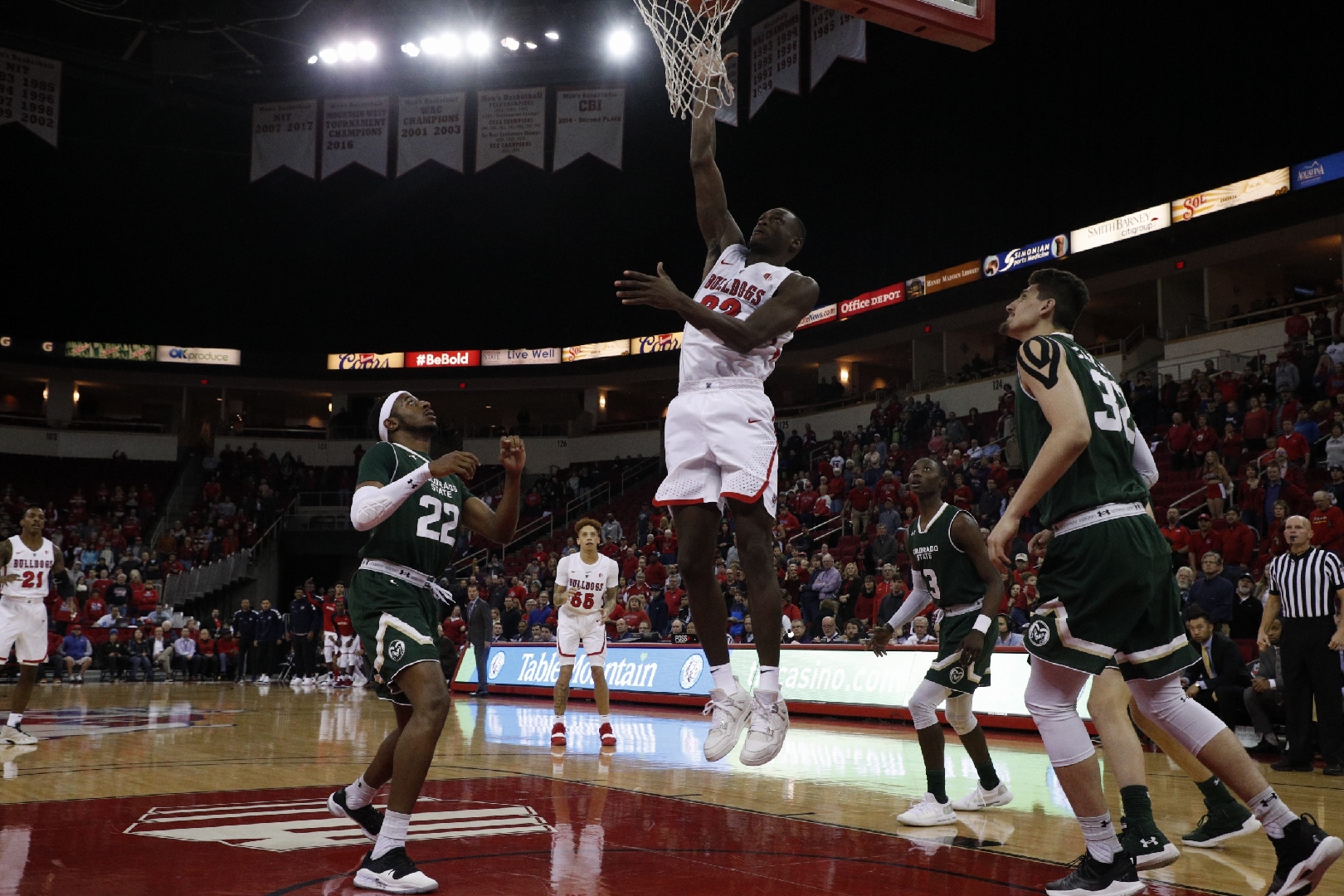 Senior point guard Deshon Taylor had 21 points and seven assists on Saturday night, and Fresno State built a big first-half lead en route to a 78-67 men’s basketball win over Colorado State.
Junior forward Nate Grimes had his second consecutive double-double with 17 points and 10 rebounds for the Bulldogs at the Save Mart Center.
Taylor went 9 for 9 at the free-throw line, where the Bulldogs were 14 of 18 overall.

Bulldogs Break It Open With 23-2 Run

The Bulldogs (11-3, 2-0 Mountain West Conference) went on a 23-2 run starting near the midpoint of the first half to lead 34-12 with 3 minutes, 44 seconds left in the period.
The Rams (5-10, 0-2) answered with a 10-2 run to close the half.
“We had big senior leadership tonight. You could feel their experience out on the floor. It didn’t have much to do with coaching, you could feel that they were experienced, knew the job at hand and that they were going to play strong and confidently,” said Fresno State coach Justin Hutson.

Next up for Fresno State is a road game Wednesday at Utah State. The Aggies are 1-1 in Mountain West play and 11-4 overall. Utah State opened Mountain West play getting pummeled 72-49 at sixth-ranked Nevada and bounced back with a 79-62 homecourt victory against Air Force (0-2, 5-9).
Then on Saturday, Jan. 12, the Bulldogs host Nevada, which has designs on a Final Four berth, in a 5 p.m. game.
The Wolf Pack, however, was stunned, 85-58, at New Mexico last Saturday. Suffering its first loss of the season, Nevada fell to 1-1 in conference play, 14-1 overall and No. 10 in the AP national poll.
“We just had a bad night all around,” Nevada coach Eric Musselman said. “We had a bad night sharing the ball. We had a bad night defensively. Usually, they’re zoned in on the scoring report, but we let guys who are shooters take open shots and we didn’t play who we are. Just a terrible game for all of us.”

Colorado State Made It a Game in Second Half

Fresno State scored the first four points of the second half for the largest lead of the period at 40-22. Colorado State had a 13-4 run to close the deficit to nine with 15 minutes left and got back within nine at the 10-minute mark and within eight in the final two minutes.

Sam Bittner added a career-high 17 points, highlighted by 6 of 8 from the floor, and New Williams scored 11 for the Bulldogs.
Anthony Masinton-Bonner had a career-high 26 points and Nico Carvacho added 23 points and 13 rebounds for the Rams.

Is Bankruptcy Near for Reeling PG&E?