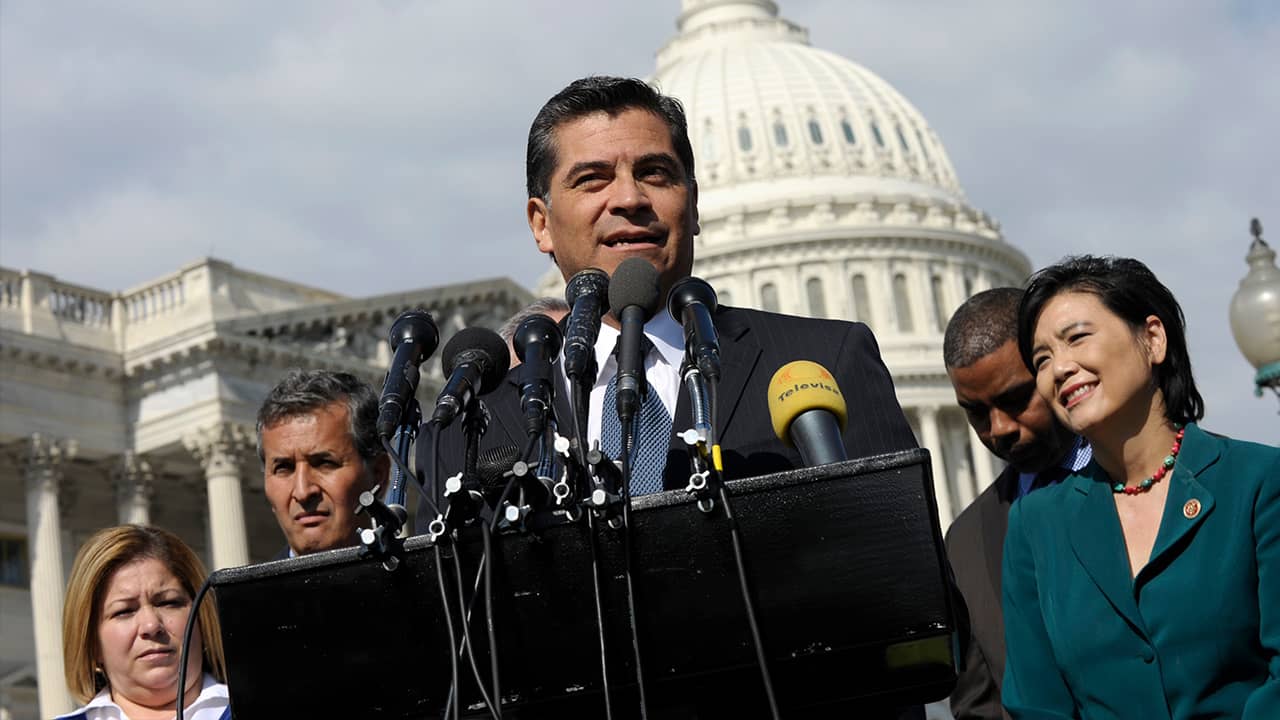 SACRAMENTO — Xavier Becerra became perhaps the nation’s most influential attorney general when he was named California’s top lawyer two years ago, and he has since used his post atop what some call the “Resistance State” to pummel President Donald Trump’s administration with dozens of legal actions.

Trump once threatened to pull all immigration agents out of California, which he predicted would create a “crime mess like you’ve never seen.”
Becerra, 60, was appointed attorney general by departing Gov. Jerry Brown, and in November won the support of nearly two-thirds of voters over Republican Steven Bailey, a retired judge. Bailey criticized Becerra for reacting to “every tweet coming out of Washington” instead of focusing on reducing crime.
In Democratic-dominated California, however, Becerra’s biggest criticism from a Democratic primary opponent, Insurance Commissioner Dave Jones, was that he didn’t sue Trump more.
Becerra’s campaign website calls him the son of immigrants, although his father, Manuel, was born in Sacramento and grew up in Mexico. His mother, Maria Teresa, was born in Mexico and came to the United States after marrying his father.
Becerra says his father “was more immigrant than my mom” because he spoke Spanish on road construction crews, while his mother spoke English at her clerical jobs.
He mentions his parents at every opportunity and used to wear his father’s wedding ring as his own.
Becerra’s longtime friends also credit his parents for his success.


“Hard-working, commitment to education, strong integrity and character: He never wavered from those values.” — former California Democratic Party Chairman Art Torres
Becerra quickly learned the benefits and pitfalls of L.A. Latino politics when he moved there in 1986 to take the job.
Within a few years he went from becoming an assistant attorney general to winning an open state Assembly seat after he says his wife, a perinatologist (an obstetrician who specializes in high-risk pregnancies), told him to “get it out of your system.”
He almost immediately began campaigning for an open congressional seat and was elected to the first of 12 two-year terms. There he made immigration and health care issues a priority as he rose to become Democratic caucus chairman before Brown picked him in 2016 to replace Kamala Harris, who won a U.S. Senate seat.
“It was really a meteoric rise,” said David Ayon, a senior fellow at the Center for the Study of Los Angeles at Loyola Marymount University and an analyst at the political opinion research firm Latino Decisions. He has known Becerra since they attended Stanford University at the same time.
Becerra was among the first of a “new generation of Latino candidates in Southern California that were really highly educated — young, energetic and had the appearance of being these Boy Scouts,” said Ayon, co-author of “Power Shift: How Latinos in California transformed politics in America.” FILE– In this March 26, 2014 file photo, Rep. Xavier Becerra, D-Calif., left, and House Minority Leader Nancy Pelosi of Calif., walk with other House Democrats and immigration leaders to gather on the steps of the Capitol in Washington, for a new conference in Washington to announce a DemandAVote discharge petition and call on House Speaker John Boehner of Ohio, and the House Republican Conference to bring up immigration reform bill H.R. 15. As the most populous state’s first Latino attorney general, Becerra is uniquely positioned to oppose the Trump administration’s immigration crackdown. (AP Photo/Carolyn Kaster, File)

Becerra Recalls No Overt Discrimination

Don Thomas, who has known Becerra since kindergarten, said Becerra learned to stay calm and self-controlled in high school as a varsity golfer and an exceptional poker player. Becerra studied the advice of famous golfers even as he practiced with a set of used clubs costing less than $100.
“I’m going to read about it, I’m going to study it, then I’m going to practice my ass off,” Thomas said. “That’s just the way he went about things.”
Teachers and friends routinely mispronounced Xavier, sometimes nicknaming him “Zav” or “X.” Becerra didn’t start correcting them with the proper Spanish pronunciation, “HAH-vee-air,” until college.
Unlike his father, Becerra recalls no overt discrimination but cringes when remembering how, nearly 30 years ago as a young politician, two women at a chamber of commerce reception told him, “We like you a lot; you blend so well.”
Lori Kalani, co-chair of the Cozen O’Connor law firm’s state attorneys general practice, represents business clients who often aren’t particularly happy with California’s aggressive environmental and consumer protection laws, like its nation-leading internet privacy law. But she credited Becerra with being a quick learner and being “extremely open-minded to opposing opinions.”

Critics from both parties said his concentration on Trump means his office neglects other core duties, like combating opioid misuse or seizing guns from those no longer allowed to have them.

US Employers Went on a Hiring Spree in December: 312K Jobs