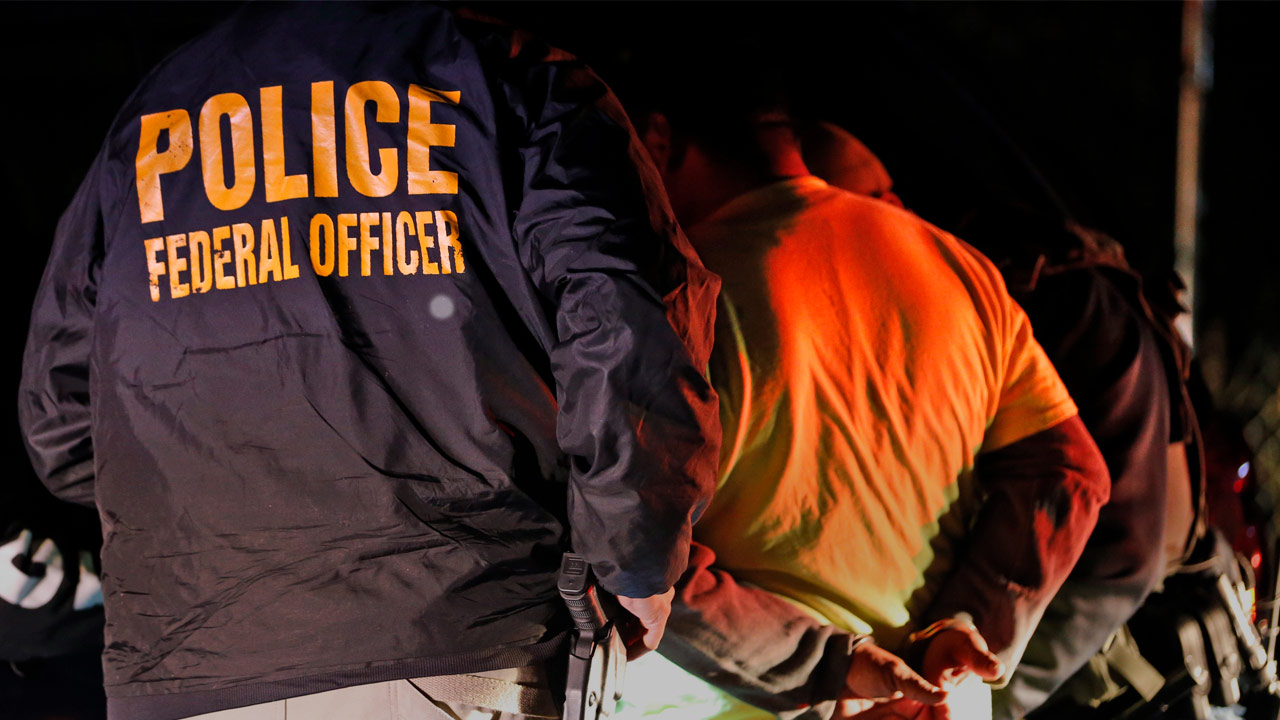 RICHMOND, Va. — The officers suit up in the pre-dawn darkness, wrapping on body armor, snapping in guns, pulling on black sweat shirts that read POLICE and ICE.
They gather around a conference table in an ordinary office in a nondescript office park in the suburbs, going over their targets for the day: two men, both with criminal histories. Top of the list is a man from El Salvador convicted of drunken driving.
U.S. Immigration and Customs Enforcement’s enforcement and removal operations, like the five-person field office team outside Richmond, hunt people in the U.S. illegally, some of whom have been here for decades, working and raising families. Under President Donald Trump, who has pushed hardline immigration policies, ICE has been exposed to unprecedented public scrutiny and criticism, even though officers say they’re doing the same job they did before the election — enforcing U.S. laws that were on the books long before 2016 and prioritizing criminals.

But they have also stepped up arrests of people who have no U.S. criminal records. It is those stories of ICE officers arresting dads and grandmothers that pepper local news. Officers are heckled and videotaped. Some Democratic politicians have called for ICE to be abolished.
ICE employees have been threatened at their homes, their personal data exposed online, officials said.
“There is a tension around ‘It could be that somebody could find out what I do and hate me for it or do worse than hate me for it,'” Ronald Vitiello, acting head of the agency, told The Associated Press.
Vitiello said the agency is monitoring social media and giving employees resources for when they feel threatened.

ICE, formed after the Sept. 11 attacks, had been told under the Obama administration to focus on removing immigrants who had committed crimes. Trump, in one of his first moves in office, directed his administration to target anyone in the country illegally.
Generally, people arrested by ICE go before immigration judges, who decide whether they must be deported, and then ICE arranges paperwork and flights out of the country.
Government data backs up that ICE is still mostly targeting people convicted of crimes. But the data also shows the agency has greatly ramped up arrests of people who were accused of crimes but not convicted and increased arrests solely on immigration violations.

ICE arrested 32,977 people accused of crimes and 20,464 with immigration violations during the budget year 2018. There were 105,140 arrests of people with criminal convictions and 158,581 arrests overall. The most frequent criminal conviction was for drunken driving, followed by drug and traffic offenses.
By comparison, in the last budget year of the Obama administration, there were 94,751 people arrested with convictions, 6,267 arrests of those with pending charges and 9,086 on immigration violations. There were 111,104 arrests overall.
Advocates say a traffic violation shouldn’t be enough to get you kicked out of the country. They accuse the agency of stoking fear and tearing families apart.
“You need some kind of agency to deal with immigration, but ICE is not that,” New York City Mayor Bill de Blasio, a Democrat, said on radio station WNYC. “ICE’s time has come and gone. It is broken. ICE has been sent on a very negative, divisive mission, and it cannot function the way it is.”

In response, California and some individual cities – including New York, Seattle, and Baltimore – have banished ICE from jails where they could easily pick up immigration violators. In addition, police in these communities rarely give up information on when suspected criminals in the U.S. illegally will be released from custody.
ICE officers now do more street operations and say they end up with more “collateral arrests,” people they happen upon who are also in the country illegally. They rarely knock on doors anymore, instead spending hours surveilling and waiting outside. They haunt courthouses.
In New York, a Mexican construction worker who has lived in the United States for more than a decade appeared before a judge. He was a week away from clearing his name in a low-level moving vehicle infraction.
When he walked out of the courthouse, ICE officers were waiting for him. He was sent to a detention center and deported less than two weeks later. He left behind a wife and three children.
“I didn’t do anything,” said the man, who spoke from Mexico but did not want to be identified because he fears for his family. “I am a hardworking person. I am not a criminal. I don’t understand.”

In Richmond, the team has a long list of targets, but they’re the only officers doing fugitive enforcement so they must prioritize. They’ve been trailing the Salvadoran man for days.
They split up into two cars and drive over to his apartment. It’s pitch black. They wait. The radio crackles. An officer says someone has left but it’s so dark it’s impossible to see who it is. Lights flash. It’s not who they’re looking for; it’s a woman. They send her on her way. The officers are jittery, thinking the mistake spooked the target. They wait.
The man eventually emerges from his apartment as the sun begins to rise. He’s wearing a neon-green shirt and construction work boots. He gets into his blue SUV and pulls out. The officers box him in on both sides and flash blue lights.
He’s calm as they search him, and he gives them an expired El Salvador passport. His name: Jose Gilberto Macua Gutierrez.
One of the officers backs Macua’s SUV back into a parking spot, and he’s handcuffed, driven back to the office, fingerprinted and placed alone in a holding cell.
The operation took too long — they missed the window for their second target.
They will try again.
“It’s a rare thing to be arrested in the country if you haven’t violated the law,” Vitiello said. “If someone is here and don’t otherwise come across the criminal justice system, it’s very rare that they are going to be arrested by ICE, despite the perceptions that are out there.”

Intern Killed by Lion had a Passion for Working with Animals