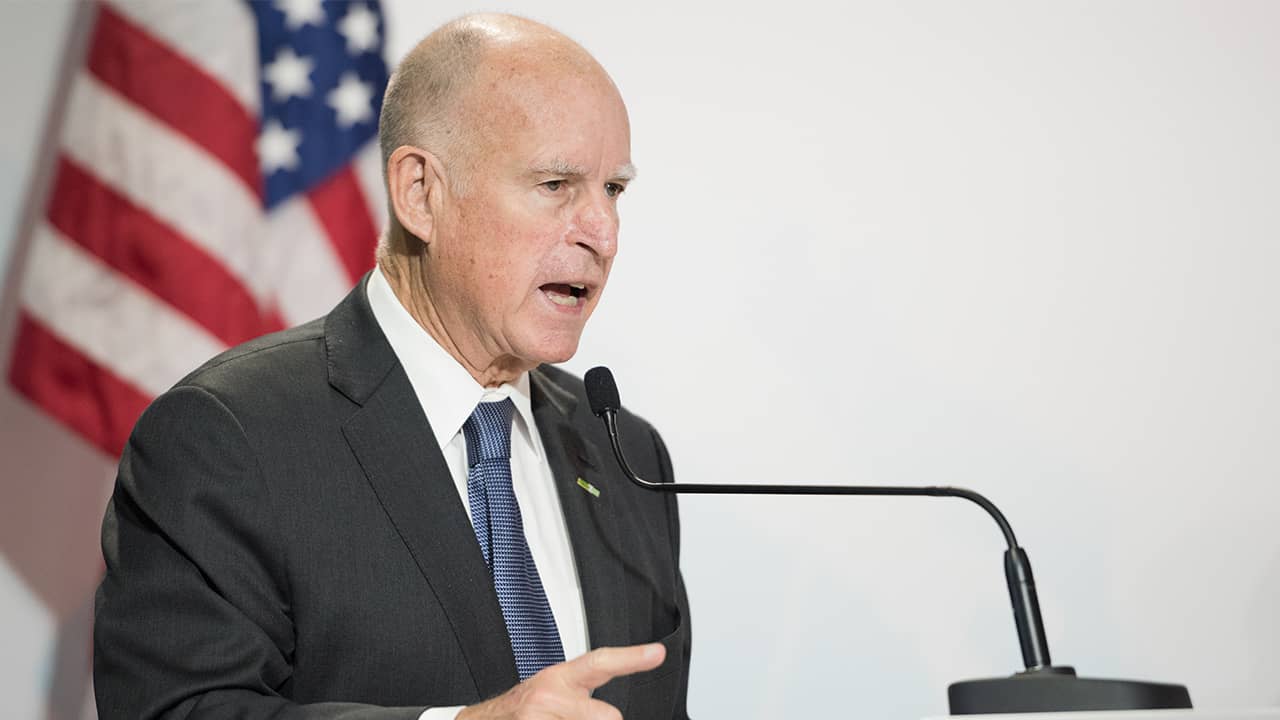 Jerry Brown closed a cosmic circle this month when he inducted actor Robert Redford into the California Hall of Fame.

Following His Father Into Politics

Six years earlier, when Brown was just 30, he had decided – after giving up early plans to become a Catholic priest and getting a law degree – to follow his father into politics and sought the counsel of Joe Cerrell, one of the state’s top campaign managers who had advised Pat Brown, about running for the Los Angeles Community College District board.

Setting Himself Apart From Pat Brown

Jerry Brown’s efforts to set himself apart from Pat Brown continued into his new governorship. The archives of Brown’s first term contain letters from Pat Brown urging his son to take particular actions or appoint particular people to positions in the new administration. However, the pleas aren’t addressed to the new governor, but rather to Gray Davis, his chief of staff.
Sometimes, father and son would make appearances at the same political event, stand a few feet from one another and never acknowledge each other’s presence. The elder Brown took to asking others, even reporters, about his progeny. “How’s Jerry doing?” he would ask acquaintances from Sacramento – almost exactly the same words that the former governor in “The Candidate,” played by Melvyn Douglas, uttered in one scene.
Jerry Brown also set himself apart from his father by scorning the sort of the public works projects, particularly highways, that Pat Brown had championed and by shunning political insiders in staffing his new administration. He brought in people from academia and civil rights, farm labor and social welfare groups who were accustomed to being on the outside looking in, including former college and law school chums.
Some of those appointments were more successful than others. One that spectacularly backfired was Jim Lorenz, who had worked on Brown’s campaign and was tapped to head the Department of Employment with instructions to develop a program to put more people to work as an antidote to welfare. Lorenz drafted a proposal, but someone leaked it to the Oakland Tribune, a very conservative newspaper in those days, which described it in a front-page headline as “Brown’s secret worker state,” implying that it was incipient socialism.

Brown panicked and sacked Lorenz, who later wrote a book, “The Man on the White Horse,” about his experiences inside the young governor’s administration that portrayed Brown as a political trickster consumed with ambition – “the finest political sleight-of-hand artist of his generation” – and enamored of symbolic buzzwords.

Trying to Steal the Political Scene

Brown, who had donned a sweater that winter to symbolize energy conservation, was hit by a barrage of reporters’ questions about his authority to order gas shipment diversions, which had already been arranged voluntarily by the state’s natural gas utilities.
The more Brown stubbornly tried to undeservedly claim credit, the sharper the reporters’ questions became until the young governor lost his cool and began berating them for doubting his word. “People are dying in Buffalo, Larry” a red-faced Brown shouted at one newsie, the San Francisco Chronicle’s Larry Liebert.
It wasn’t the first or last time Brown had tried to steal the political scene with symbolic acts as he attempted to raise his national political profile, and it wasn’t the first or last time it backfired.
By then, Brown’s first governorship had already evolved into a continuous campaign operation. He ran for governor in 1974, president in 1976, re-election in 1978, the presidency again in 1980 and, finally, the U.S. Senate in 1982.
With campaigns his preoccupation, Brown only occasionally engaged in governing California and had precious little on his gubernatorial record of lasting importance when he departed.
The day after being forced to concede the Senate seat to Republican Pete Wilson, Brown told reporters: “I believe the people of California would like a respite from me and in some ways I would like a respite from them.”
But the mutual respites would not be permanent.
CALmatters is a public interest journalism venture committed to explaining how California’s state Capitol works and why it matters. For more stories by Dan Walters, go to calmatters.org/commentary.