A Direct Line to the Past: The Streetcars of San Francisco 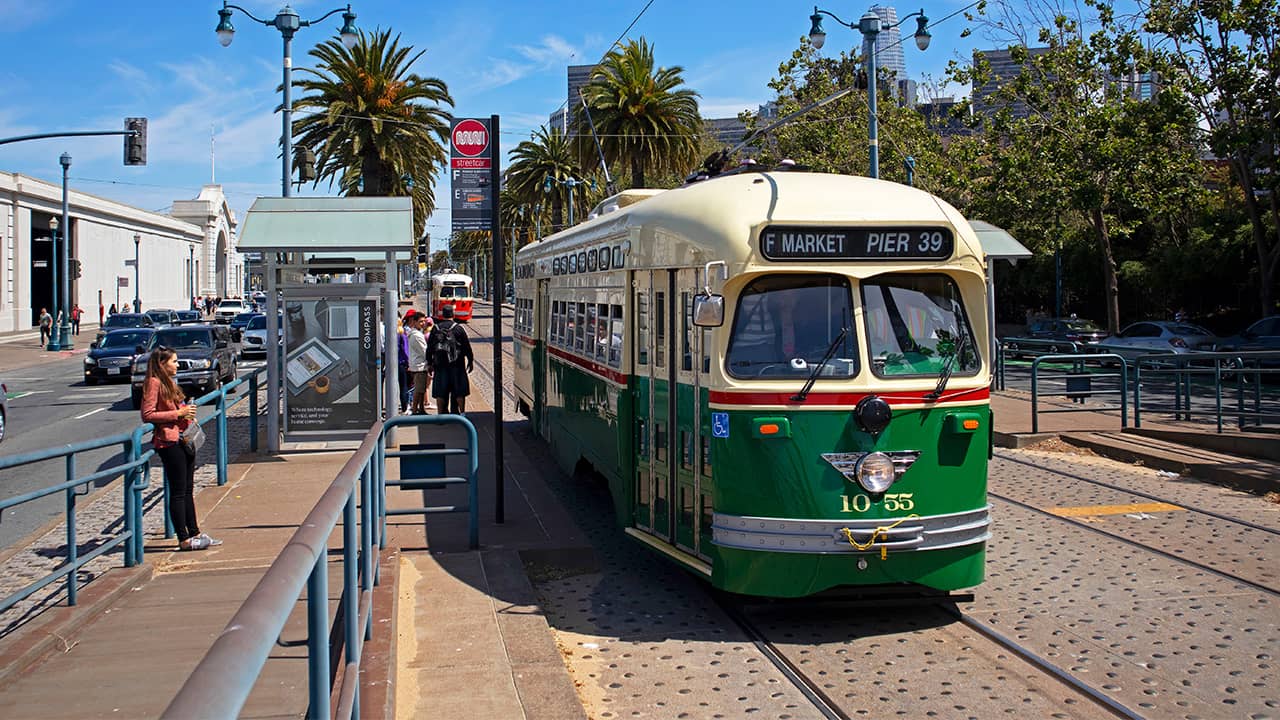 When Rick Laubscher was 6 years old, he rode a streetcar to the circus. The San Francisco native is pretty sure he saw the lions and tigers and all that comes with it, but he wasn’t left with much of an impression.
“I don’t remember the circus,” he says six decades later. “But I remember that streetcar ride.”
So started a lifelong fascination with San Francisco’s streetcars that eventually led to Laubscher playing a key role in the creation of a vintage trolley line through the heart of the city, allowing visitors and commuters alike to ride the rails just as they did a century ago. While perhaps not as recognizable as the city’s famed cable cars, the F-Line of the San Francisco Municipal Transportation Agency (also known as Muni) offers a unique way to take in the sights. Every day, up to two dozen vintage streetcars, many built before World War II,carry people from the Castro District to Fisherman’s Wharf.
“San Francisco’s past isn’t just frozen in an old picture or sitting in a museum,” says Ed Reiskin, the transportation agency’s director of transportation. “You can actually get on and ride these streetcars from another era.”

Two Vintage Types of Transit Integrated Into Its Modern System A streetcar built in 1928 for use in Milan rounds a curve in San Francisco’s Castro neighborhood in July. (Photo for The Washington Post by Justin Franz)

Reiskin says that Muni is unique because it has two vintage types of transit integrated into its otherwise modern system. The famous cable cars date from 1873 and were designed to climb the city’s steep hills by connecting to a cable that moves beneath the street. The 1906 earthquake destroyed many of the city’s cable car lines and most were replaced with more modern streetcars, which receive their power from an overhead wire.
As it did in many cities, the streetcar spurred a huge amount of development in San Francisco. By the 1930s, 50 trolley lines connected every neighborhood, including four sets of streetcar tracks right up the middle of Market Street.
“Streetcars built the urban America that we know today,” Laubscher says. “The electric streetcar helped stretch the boundaries of our cities.”
Streetcar ridership across the country began to decline with the advent of the automobile. In the 1950s, dozens of streetcar routes were replaced with buses in San Francisco. In the 1970s, the city began to modernize its rail system and replaced its old streetcars with modern light rail vehicles. It also put its Market Street route beneath the main thoroughfare. In 1982, the last vintage streetcars were put into storage. To mark the end of rail service on Market Street, Muni rolled out one of its oldest streetcars for a final ride.

It was that ride that gave Laubscher, then chair of the San Francisco Chamber of Commerce’s transportation committee, an idea to organize a vintage trolley festival that would offer rides up and down Market Street on weekends. The chamber took the idea to Mayor Dianne Feinstein, who supported it, but cautioned she did not “want to see any junk out there.” The first festival was an overwhelming success that was repeated for five years, setting the stage for a permanent vintage trolley line through the city. On Sept. 1, 1995, the F-Line opened for service.
The F-Line starts at the intersection of 17th and Castro streets, in the heart of the vibrant Castro District, and heads toward downtown on Market Street. Heading east, the trolleys pass the U.S. Mint and within a few blocks of landmarks such as City Hall (which features the fifth largest dome in the world) and Union Square. Near the intersection of Market and New Montgomery streets, the F-Line passes in front of the Palace Hotel, where President Warren Harding died in 1923.
After skirting the Financial District, the F-Line rounds a curve toward the small San Francisco Railway Museum run by Market Street Railway, a nonprofit organization that advocates for and supports historical transit in the city. Next stop is the Ferry Building, which completed on the city’s waterfront in 1898 and is known for its clock tower that reaches 245 feet into the air. From here, the F-Line follows the waterfront all the way to Fisherman’s Wharf, a popular tourist destination. Along the way, passengers can take in views of the bay and Coit Tower, a concrete edifice dedicated to firefighters who perished in some of the city’s worst blazes.

The Experience of Riding One of the Vintage Cars A historic streetcar painted in honor of Dallas, Texas, passes Pier 39, a popular tourist destination, in June 2016. Streetcars fell out of favor in most of the country after the automobile boom of the 1950s, but the city by the bay still uses them. (Photo for The Washington Post by Justin Franz)

While the more-modern light rail vehicles in Muni’s fleet may offer a smoother and quieter ride, the experience of riding one of the vintage cars is much more memorable. Instead of cold plastic seats, the vintage cars have wooden benches and the only air conditioning is an open window. While Muni has upgraded the cars with amenities such as GPS and backup cameras – all standard on more-modern streetcars – you would be hard-pressed to find anything else from the 21st century when you board.
Emma González has been at Muni for 20 years and has been working on the vintage streetcars since 2008. She says it’s hard not to fall in love with the old cars, which come in a variety of shapes, sizes and colors.
“I feel like a movie star” operating the old streetcars, she says. “People come from all over the world to ride them.”
Her favorite streetcar is No. 578, affectionately called the “Dinky.” The car was built in 1896 and looks nearly identical to the hill-climbing cable cars. In total, Muni has more than 50 historical streetcars, many from across the United States, but others hail from England, Italy and Australia. The bulk of the fleet is made up of Presidents’ Conference Committee streetcars, or PCCs, streamlined cars that date from the 1930s. More than 4,500 PCCs were built and used in 33 cities. While some of the PCCs are painted in Muni’s vintage green and cream livery, most are painted in tribute to different cities that used PCCs, including Washington, Boston, Chicago and Philadelphia.

“It’s a riot of color, patterns and designs representing all of the different transit agencies,” Laubscher says.
Maintaining century-old streetcars is no easy task, Reiskin says. Because of their age, Muni frequently has to make its own parts to keep them in service. However, the agency receives plenty of help from Market Street Railway; Laubscher is the group’s president.
Over the years, Market Street Railway has advocated for the expansion of historical streetcar service, including the creation of the E-Line in 2015 that goes from the Ferry Building toward AT&T Park, home of the San Francisco Giants.
There are dozens of museums across America dedicated to streetcars. Some cities have followed San Francisco’s lead and re-created their own vintage lines. However, Laubscher says none of them is quite like the F-Line in San Francisco, particularly because the streetcars are still a critical part of the city’s transit system, one that in addition to carrying visitors takes commuters to work and school.
“It’s not enough to just preserve machines like these as static displays; you have to let people experience them,” he says. “San Francisco relishes its transit history, but we also put our history to work.” If You Go, Here’s Where to Stay

Palace Hotel | 2 New Montgomery St. | 415-512-1111 | sfpalace.com
Located just feet from the F-Line, this was the city’s first luxury hotel when it was established in 1875. It was rebuilt in 1909 after the original was destroyed in the 1906 earthquake. Rooms start at $200.
Hotel Vitale | 8 Mission St. | 415-278-3700 | hotelvitale.com
Right on the Embarcadero, this hotel offers its guests stunning views of the bay from its rooms and its rooftop deck. Rooms start at $200.
Parker Guest House | 520 Church St. | 415-621-3222 | parkerguesthouse.com
This bed-and-breakfast is near the Castro and Mission neighborhoods, steps away from some of San Francisco’s best bars and restaurants. A complimentary wine social is included in your stay. Rooms start at $200.

Here’s Where to Eat

Kitchen Story | 3499 16th St. | 415-525-4905 | kitchenstorysf.com
Located just a block from the F-Line in the Castro District, the restaurant features a menu with California and Asian influences. It is open for brunch and dinner, and is known for its bottomless mimosas. Entrees start at $12.
Fog City | 1300 Battery St. | 415-982-2000 | fogcitysf.com
This modern bar and eatery is located along the Embarcadero and offers outdoor seating with great views of the city and the nearby streetcars. The menu features locally inspired American cuisine and entrees start at $15.
The Buena Vista | 2765 Hyde St. | 415-474-5044 | thebuenavista.com
This cafe with a wide-ranging menu is located near Fisherman’s Wharf and is known for its Irish coffee. Entrees start at $10.

What You Can Do

The F-Line | 415-701-2311 | sfmta.com
The historical F-Line streetcars run between the Castro District and Fisherman’s Wharf from 6 a.m. until 1 a.m. The cars run every six to 10 minutes and there are multiple stops along the route. Lines to board the streetcars can be particularly long at the end points and along the Embarcadero but considerably shorter the farther away you get from the waterfront. Fare is $2.75 for adults and $1.25 for children and seniors. Single or multiday passes also available.
San Francisco Railway Museum | 77 Steuart St. | 415-974-1948 | streetcar.org
Run by the nonprofit Market Street Railway, this museum and gift shop features exhibits on the history of transit in San Francisco, including a full-size reproduction of a motorman’s platform from 1911. Open Tuesday through Sunday from 10 a.m. to 5 p.m. Free.
*For more information, visit sftravel.com.