BUENOS AIRES, Argentina — President Donald Trump teamed up with the leaders of Canada and Mexico on Friday to sign a revised North American trade pact, a deal that fulfills a key political pledge by the American president but faces an uncertain future in the U.S. Congress. The celebratory moment was dimmed by ongoing differences over Trump’s steel and aluminum tariffs, as well as plans for massive layoffs in the U.S. and Canada by General Motors.

“It’s been long and hard. We’ve taken a lot of barbs and a little abuse and we got there. It’s great for all our countries.” — President Donald Trump

The U.S.-Mexico-Canada Agreement is meant to replace the 24-year-old North American Free Trade Agreement, which Trump has long denigrated as a “disaster.”

“It’s been long and hard. We’ve taken a lot of barbs and a little abuse and we got there,” Trump said of the pact. “It’s great for all our countries.”

Legislative approval is the next step in the process, but could prove to be a difficult task in the United States, especially now that Democrats — instead of Trump’s Republicans — will control the House of Representatives come January. Democrats and their allies in the labor movement are already demanding changes to the agreement.

Within hours of the signing, Senate Democratic Leader Chuck Schumer said the deal must have stronger labor and environmental protections in order to get majority support in Congress and “must prove to be a net benefit to middle-class families and working people.”

“With hard work, good will and determination I’m confident that we will get there.” — Canada’s Prime Minister Justin Trudeau

The three countries agreed to the USMCA just hours before a U.S.-imposed Sept. 30 deadline. Many trade analysts say the successor to NAFTA isn’t all that different from the old one, despite Trump’s claim that it would “transform North America back into a manufacturing powerhouse.”

While Trump hailed the revised trade pact, Trudeau was more measured and used the event to call on Trump to remove steel and aluminum tariffs the U.S. slapped on Canada and Mexico. Trudeau also referenced recent downsizing moves by GM in North America as a “heavy blow.”

“With hard work, good will and determination I’m confident that we will get there,” Trudeau said.

Pena Nieto, who will hand off to his successor Saturday, said he was honored to be at the signing on the final day of his administration, calling it the culmination of a long process “that allow us to overcome differences and to conciliate our visions.”

The new agreement requires that 40 percent of cars eventually be made by countries that pay autoworkers at least $16 an hour — that is, the U.S. and Canada and not Mexico — to qualify for duty-free treatment under the trade pact. It also requires Mexico to pursue reforms of labor law to encourage independent unions that will bargain for higher wages and better working conditions for Mexican workers.

The signing came at the front end of two days of tough diplomacy for Trump. On the top of his agenda is a Saturday dinner meeting with Chinese President Xi Jingping that will determine if the two can ease escalating trade tensions. Before Trump arrived in Argentina he injected additional drama into the proceedings by canceling another high-stakes meeting, with Russian President Vladimir Putin. Also of interest was whether Trump would have a run-in with Saudi Crown Prince Mohammed bin Salman, who was attending amid global dismay over the murder of Saudi journalist Jamal Khashoggi.

Trump gathered with all the leaders for a traditional group photo Friday, chatting with the leaders of Canada, Japan and France. But he walked by — without appearing to acknowledge — Putin or the Saudi crown prince. 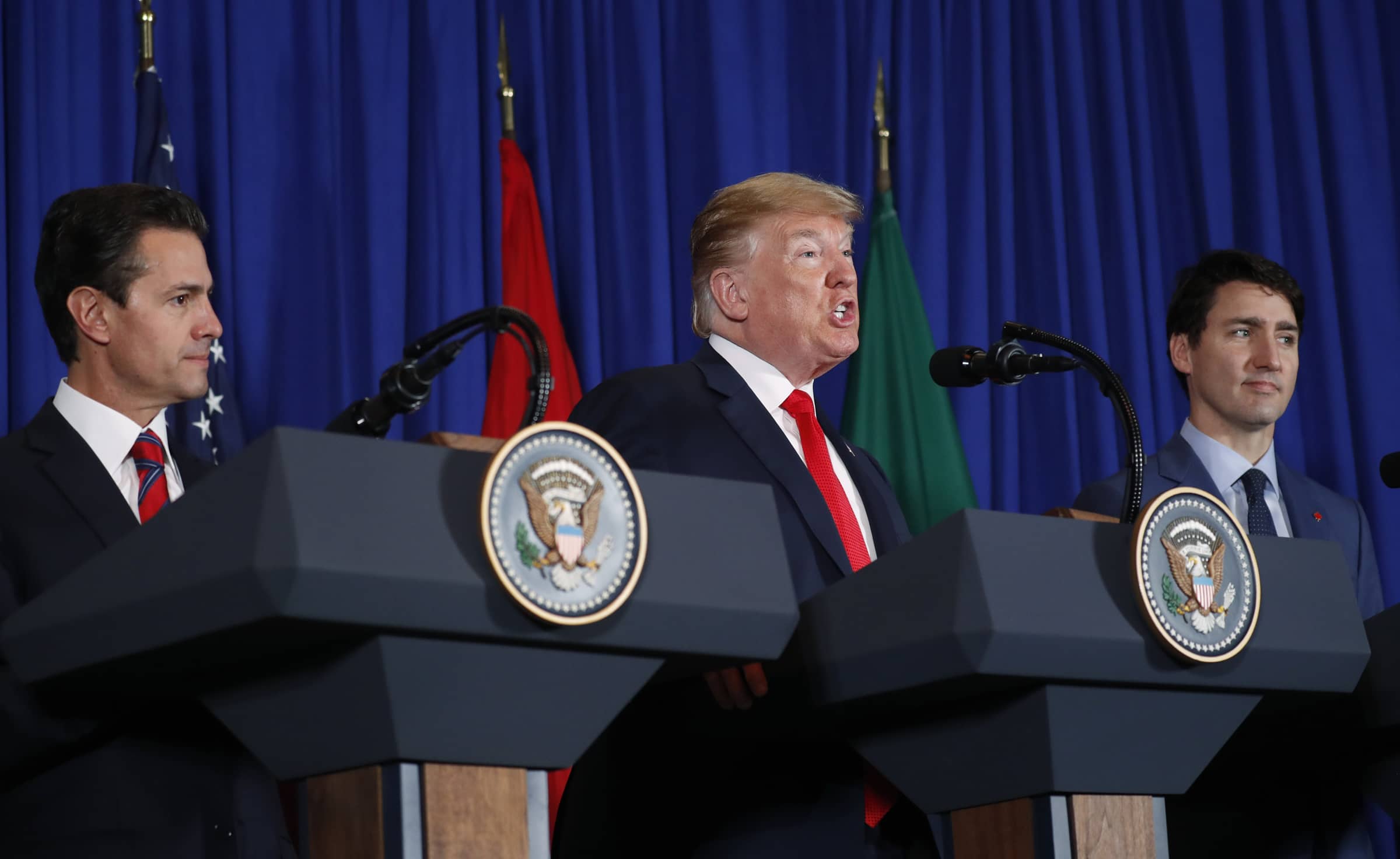 Trump Canceled on Putin Not Long After Cohen Incident

Trump, who arrived in Buenos Aires late Thursday, barreled into the two-day meeting by announcing via Twitter that he was canceling the planned meeting with Putin over Russia’s seizure of Ukrainian vessels.

Trump canceled on Putin not long after his former lawyer, Michael Cohen, revealed he had lied to Congress to cover up that he was negotiating a real estate deal in Moscow on Trump’s behalf during the Republican presidential primary in 2016. The news ensured any meeting with Putin would have put a spotlight on the special counsel’s investigation into whether the Trump campaign colluded with Moscow during the campaign. Trump has denied any wrongdoing.

“The Russian Witch Hunt Hoax, which is hopefully now nearing an end, is doing very well. Unfortunately, it probably does undermine our relationship with Russia,” Sanders said. “However, the reason for our canceled meeting is Ukraine. Hopefully, that will be resolved soon so that productive conversations can begin.”

Russia’s foreign minister Sergey Lavrov called the cancellation a missed opportunity, saying in remarks from Buenos Aires that were carried by Russian state television that he doubted “this move would help settling a number of important international problems.” He added: “Love can’t be forced.”

Trump opened Friday with a cordial meeting at the Casa Rosada with Argentine President Mauricio Macri, a longtime business acquaintance. Posing for photos in the gilded Salón Blanco, Trump spoke about their longtime personal relationship and said they would discuss trade, military purchases and other issues.

“We’ve known each other a long while,” Trump said, noting he worked with Macri’s father on real estate developments. The businessman-turned-politician joked that when he and Macri first met they’d never have imagined their future roles on the world stage.

Macri is hosting the summit as he struggles with problems at home, including trying to halt economic turmoil that has caused the steep depreciation of the Argentine peso.