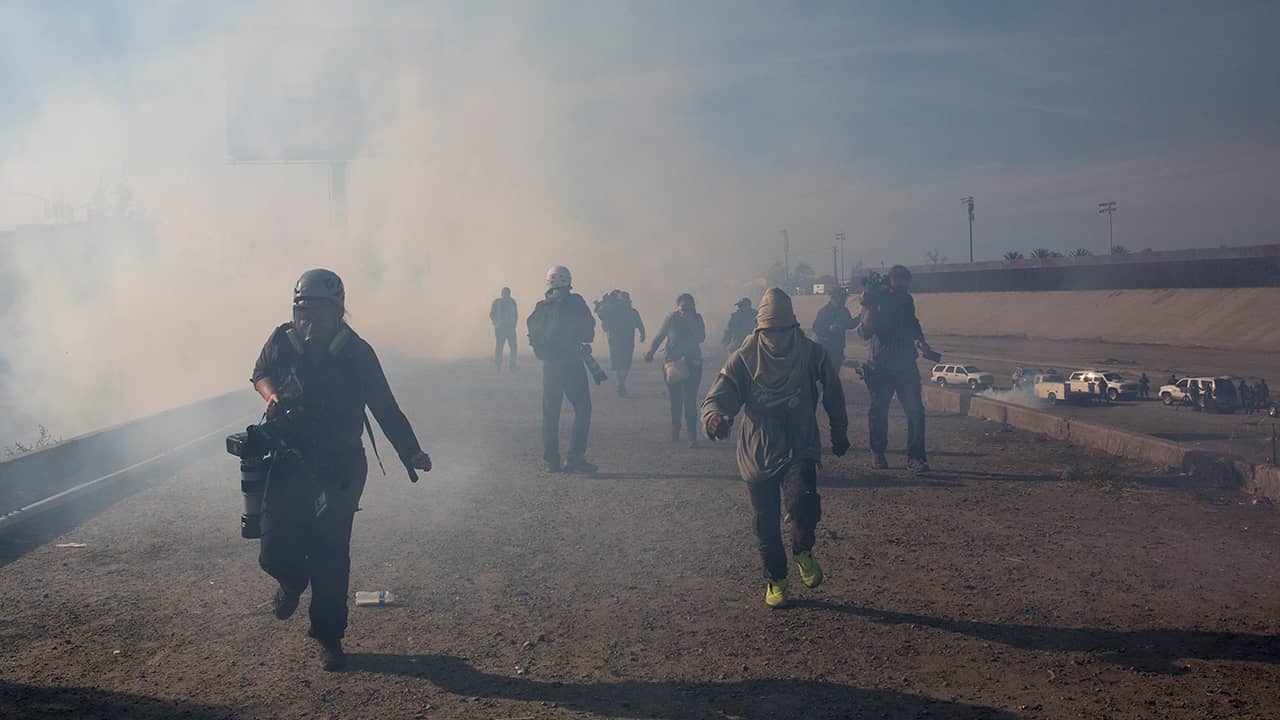 SAN DIEGO — President Donald Trump is strongly defending the U.S. use of tear gas at the Mexican border to repel a crowd of migrants that included angry rock-throwers but also barefoot, crying children.

“They were being rushed by some very tough people and they used tear gas. Here’s the bottom line: Nobody is coming into our country unless they come in legally.” — President Donald Trump

Critics denounced the border agents’ action as overkill, but Trump kept to a hard line.

“They were being rushed by some very tough people and they used tear gas,” Trump said Monday of the previous day’s encounter. “Here’s the bottom line: Nobody is coming into our country unless they come in legally.”

At a roundtable in Mississippi later Monday, Trump seemed to acknowledge that children were affected, asking, “Why is a parent running up into an area where they know the tear gas is forming and it’s going to be formed and they were running up with a child?”

He said it was “a very minor form of the tear gas itself” that he assured was “very safe.”

Without offering evidence, he also claimed that some of the women are not really parents but are instead “grabbers” who steal children so they have a better chance of being granted asylum in the U.S.

The showdown at the San Diego-Tijuana border crossing has thrown into sharp relief two competing narratives about the caravan of migrants hoping to apply for asylum but stuck on the Mexican side. Trump portrays them as a threat to U.S. national security, intent on exploiting America’s asylum law, but others insist he is exaggerating to stoke fears and achieve his political goals.

The sheer size of the caravan makes it unusual.

“I think it’s so unprecedented that everyone is hanging their own fears and political agendas on the caravan,” said Andrew Selee, president of the Migration Policy Institute, a nonpartisan think tank that studies immigration. “You can call it scary, you can call it hopeful, you can call it a sign of human misery. You can hang whatever angle you want to on it.”

Trump rails against migrant caravans as dangerous groups of mostly single men. That view featured heavily in his speeches during the midterm election campaign when several were hundreds of miles away, traveling on foot. Officials have said some 500 members are criminals but haven’t backed that up with details on why they think so. On Monday, Trump tweeted that the caravan at the border included “stone cold criminals.”

Mario Figueroa — Tijuana’s social services department director who is overseeing operations at the sports complex where most of the migrants in the caravan are staying — said as of Friday that of the 4,938 staying there, 933 were women, 889 were children and 3,105 were men, which includes fathers traveling with families along with single men.

“These children are barefoot. In diapers. Choking on tear gas. Women and children who left their lives behind — seeking peace and asylum — were met with violence and fear. That’s not my America.” — California Gov.-elect Gavin Newsom

The U.S. military said Monday that about 300 troops who had been deployed in south Texas and Arizona as part of a border security mission have been moved to California for similar work. The military’s role is limited largely to erecting barriers along the border and providing transportation and logistical support to Customs and Border Protection.

“These children are barefoot. In diapers. Choking on tear gas,” California Gov.-elect Gavin Newsom tweeted. “Women and children who left their lives behind — seeking peace and asylum — were met with violence and fear. That’s not my America.”

U.S. Customs and Border Protection Commissioner Kevin McAleenan said the administration’s concerns about the caravan “were borne out and on fully display” Sunday.

McAleenan said hundreds — perhaps more than 1,000 — people attempted to rush vehicle lanes at the San Ysidro crossing. Mexican authorities estimated the crowd at 500. The chaos followed what began as a peaceful march to appeal for the U.S. to speed processing of asylum claims.

After being stopped by Mexican authorities, the migrants split into groups. On the west side of the crossing, some tried to get through razor-wire fencing in a concrete levee that separates the two countries. On the east side, some pulled back a panel of fencing made of Army surplus steel landing mats to create an opening of about 4 feet, through which a group of more than 30 people crossed, according to a U.S. official who was not authorized to discuss the matter publicly and spoke on condition of anonymity. Others made it over a steel fence farther east.

McAleenan said four agents were struck with rocks but were not injured because they were wearing protective gear.

Border Protection agents launched pepper spray balls in addition to tear gas in what officials said were on-the-spot decisions made by agents. U.S. troops deployed to the border on Trump’s orders were not involved in the operation.

“The agents on scene, in their professional judgment, made the decision to address those assaults using less lethal devices,” McAleenan told reporters. ALTERNATIVE CROP OF XRE301.- A Central American migrant is stopped by U.S. agents who order him to go back to the Mexican side of the border, after a group of migrants got past Mexican police at the Chaparral crossing in Tijuana, Mexico, Sunday, Nov. 25, 2018, at the border with San Ysidro, California. The mayor of Tijuana has declared a humanitarian crisis in his border city and says that he has asked the United Nations for aid to deal with the approximately 5,000 Central American migrants who have arrived in the city. (AP Photo/Pedro Acosta)APTOPIX

The scene was reminiscent of the 1980s and early 1990s, when large groups of migrants rushed vehicle lanes at San Ysidro and overwhelmed Border Patrol agents in nearby streets and fields.

The scene left many migrants feeling they had lost whatever possibility they might have had for making asylum cases.

Isauro Mejia, 46, of Cortes, Honduras, looked for a cup of coffee Monday morning after spending Sunday caught up in the clash.

“The way things went yesterday … I think there is no chance,” he said.

Mexico’s Interior Ministry said in a statement it would immediately deport those people arrested on its side and would reinforce security.

Border Patrol agents have discretion on how to deploy less-than-lethal force. It must be both “objectively reasonable and necessary in order to carry out law enforcement duties” — and used when other techniques are insufficient to control disorderly or violent subjects.

Increasing Desperation Caused by the Hardening of the Policies

“This situation is now escalating to the point of a self-fulfilling prophesy. The more you squeeze, the more it artificially creates something that didn’t exist, but now is starting to become a crisis.” — Rachel Schmidtke, program associate for migration at the Woodrow Wilson International Center for Scholars Mexico Institute

Mattis also was empowered to temporarily detain migrants in the event of violence against the border patrol. Mattis told reporters that this did not change the military’s mission in any way and that he would use the new authorities only in response to a request by Homeland Security Secretary Kirstjen Nielsen. He said there had been no such request yet.

With the caravan as a backdrop, Trump has used national security powers to circumvent long-standing immigration law to deny asylum to anyone caught crossing the border illegally. However, a court has put those regulations on hold after civil liberties groups sued. On Thanksgiving Day, the president warned of “bedlam, chaos, injury and death” if the courts block his efforts to harden immigration rules.

But it’s also possible that Sunday’s clash was borne of increasing desperation caused by the hardening of the policies, said Rachel Schmidtke, program associate for migration at the Woodrow Wilson International Center for Scholars Mexico Institute.

“This situation is now escalating to the point of a self-fulfilling prophesy,” she said. “The more you squeeze, the more it artificially creates something that didn’t exist, but now is starting to become a crisis.”

Looking Ahead, Democrats Jockey to be Pelosi’s Heir Apparent