The Rolling Stones frontman, who will tour America next spring with his iconic band, says live shows give him a rush that can’t be matched and is the reason that at 75, he still loves touring.

“When you go out in front of all those people you get an enormous rush of chemicals in your body — your own chemicals, not chemicals you’ve put in.” — Mick Jagger

“When you go out in front of all those people you get an enormous rush of chemicals in your body — your own chemicals, not chemicals you’ve put in,” he said laughing.

“Let’s face it, it is a huge buzz. Must be like playing football or something,” he said.

Jagger should feel like a football player — since he’ll be playing the same stadiums as NFL stars when the Stones’ No Filter tour launches in Miami on April 20, 2019.

“Basically your life’s attuned to doing those few hours onstage and everything else is a build up to that. Of course, you get to enjoy yourself at other times, but really you’re thinking about the next show or the show you’re doing that night,” said Jagger, who will be joined onstage with Keith Richards, Ronnie Wood and Charlie Watts. “A lot of prep time goes into that — keeping yourself (together) so you can get through the whole thing without screwing up physically and mentally and keeping yourself really sharp. But I really enjoy it.”

In an interview Monday with The Associated Press, Jagger talked about the tour, only having three Grammys and appearing in the new-but-old Aretha Franklin concert documentary, “Amazing Grace,” filmed at a Los Angeles church in 1972.

Jagger Talks About the Tour

AP: What can fans expect from the U.S. shows?

Jagger: A good night out! A good night out for all. We did a kind of similar tour in Europe this summer, so it’s got a lot of fun. …It’s pretty high energy and it’s a good a show, I think. I’m into it.

AP: Is it different performing in the U.S. compared to other territories?

Jagger: Well, I don’t have to speak foreign languages normally, so that’s a big difference. When you tour Europe it’s a lot of languages, so I try to do them all and that takes up some time, so (in the U.S.) I can concentrate on some other things. There’s lots of regional differences, say between Houston and New York, so you’ve got to tune yourself to that a little bit. It’s slightly about adjusting your set and attitude. Its different. It’s nice that it’s different, you don’t want it to be completely homogenous. But it’s great to be going around so many different areas, different states and so on.

New Music in the Works

Jagger: It’s going good. I’ve got lots of stuff. I’m doing some more writing this week. And I’m always, like, messing around. I enjoy the writing process a lot. I mean, you always think the last thing you wrote is really wonderful and sometimes they’re really not (laughs). But it’s really fun doing it and it’s really enjoyable doing new things.

AP: You don’t even need to release music because of the band’s catalog…

Jagger: Yeah, and we haven’t released that much and I think it’s a shame we haven’t released more new music. So, I would hope we’re going to release some music. We do have a huge catalog. The thing about the catalog is when we come up to doing a tour like this, I try and go back and find some stuff that we haven’t done ever or we haven’t done very much and try to mix it in, so it isn’t always the same show. But when you’re playing a really big show, there’s a certain amount of songs people want to hear — you don’t have to play them — but there’s a certain percentage of the songs that people will want to hear and if you don’t do them, they’ll go, “Wish he’d done that one.”

The Success of the Band’s Blues Album

AP: Were you happy with the success of the band’s blues album, which won a Grammy this year?

Jagger: That was good. We weren’t really setting out to do that. It just happened. It was a fun thing to do. It was … stuff we’d known for years since we were kids and played in like clubs and we knew it all pretty well. I really thought it was great and the response was really surprising, and I thought that was really wonderful. And I just hope we’re going to come up with some new stuff as well.

AP: I’m surprised the Stones only have three Grammys, when other acts have 10 or 20. Does that bother you?

Jagger: No, I don’t really care about Grammys very much. I’m not saying it’s not not nice to have, it’s lovely to have. But it’s not going to break my heart if I don’t get Grammys and if my Grammys count is not as big as other peoples. But it’s very nice to get a Grammy. I appreciate it. 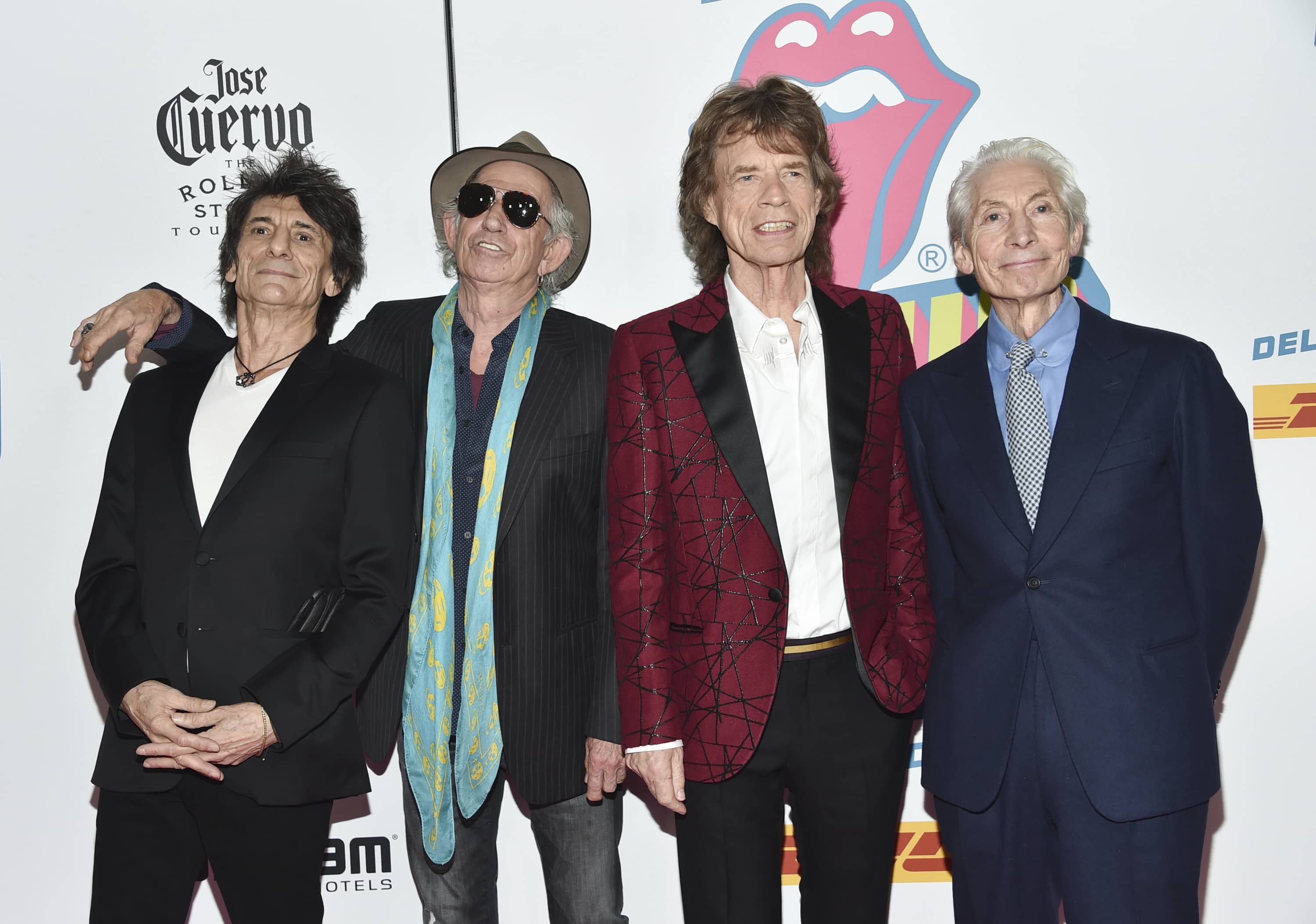 FILE – In this Nov. 15, 2016 file photo, The Rolling Stones, from left, Ronnie Wood, Keith Richards, Mick Jagger and Charlie Watts attend the opening night party for “Exhibitionism” in New York. The Rolling Stones will be rolling through the U.S. next year. The band says it is adding a 13-show leg to its No Filter tour in spring 2019, kicking off in Miami on April 20. (Photo by Evan Agostini/Invision/AP)

AP: I saw you in the new Aretha documentary…

“I remember it really well. It was just a wonderful event. It was quite mesmerizing from start to finish really.” — Mick Jagger

Jagger: I didn’t even see it yet! …It was like an amazing event. It was so delayed and long and I don’t think Aretha wanted it to come out for whatever reasons and there were so many technical problems with the sound, but I’m glad it’s out and I can’t wait to see it. …It was quite a lot of preaching. Did they leave the preaching in?

Jagger: I remember that very well.

AP: What else do you remember about that day?

Jagger: I remember it really well. It was just a wonderful event. It was quite mesmerizing from start to finish really. I think I went with Charlie (Watts) and I think Billy Preston quite possibly, but I don’t know if you see him there. It was really an amazing, really fantastic day in church really, which I haven’t had for a while.

AP: What do you remember about working with filmmaker Nicolas Roeg, who died a couple days ago and directed you in 1970’s “Performance”?

Jagger: He was a wonderful filmmaker and I only worked with him that one time, and he was co-directing. And he’s a wonderful cinematographer and did some great movies, and he was very quirky and all his films were very different, one to the other. He did some great work and he had a long life and I’m sad he passed away, but I always remember working with him; a wonderful guy to work with.

AP: I know you’ve produced a lot lately, from TV shows to documentaries, but do you want to do more acting?

Jagger: I just actually finished doing a cameo part in a movie which is kind of a twisted thriller, which is called “The Burnt Orange Heresy.” I just finished doing that in Italy. I did a couple weeks on that, so it’ll be out next year. It was only a small part, but fun to do.