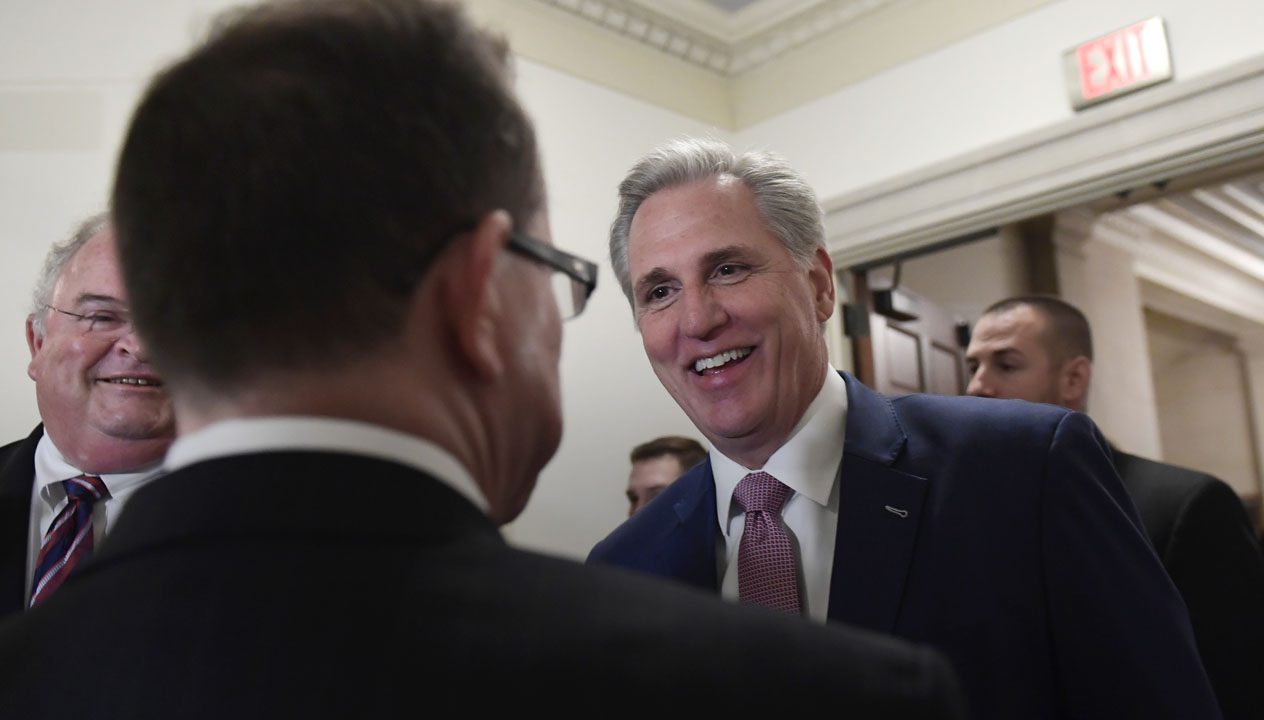 WASHINGTON — Republican Kevin McCarthy easily won an internal party election Wednesday to take over the shrunken House GOP caucus, a familiar role for the underestimated scrapper whose top priority will be to protect President Donald Trump’s agenda and try to build the party back to retake the majority.

The speaker’s gavel long gone, the race for minority leader was McCarthy’s to lose, but the Californian’s rise was never guaranteed. He’s close to Trump, but the president is also friendly with Rep. Jim Jordan, the conservative Freedom Caucus member, and both faced testy colleagues ready to assign blame after the midterm election losses.

In the end, McCarthy pushed past Jordan, 159-43, according to officials familiar with the closed-door voting.

The contest between McCarthy and Jordan reflected the split between the GOP’s conservative flank, whose numbers are bolstered after the election, and what remains of the centrists. It will continue to challenge the new leader.

McCarthy “knows what he needs to do,” said GOP Whip Steve Scalise, the Louisiana Republican who was gravely wounded in last year’s congressional baseball practice shooting and unanimously won the No. 2 spot as minority whip.

“You always look in the mirror and see what you can do better,” Scalise said Tuesday. Republicans, he said, “need to do a better job of letting people know what we stand for.”

Theirs was the marquee contest as senators also chose new leaders, but House Democrats put off until after Thanksgiving the biggest contest, Rep. Nancy Pelosi’s bid to return as her party’s nominee for speaker.

On the other side of the Capitol, senators chose Majority Leader Mitch McConnell for another term leading Republicans and Chuck Schumer for Democrats in closed-door party elections that lacked the drama of the House contest.

Both McConnell and Schumer were chosen as leader by acclamation, according to those familiar with the private caucus meetings. McConnell, the Kentucky Republican who expanded GOP ranks in last week’s midterm, faced no opponent. Democrats returned Schumer’s entire leadership team, despite the failure to capture the majority in the midterms. 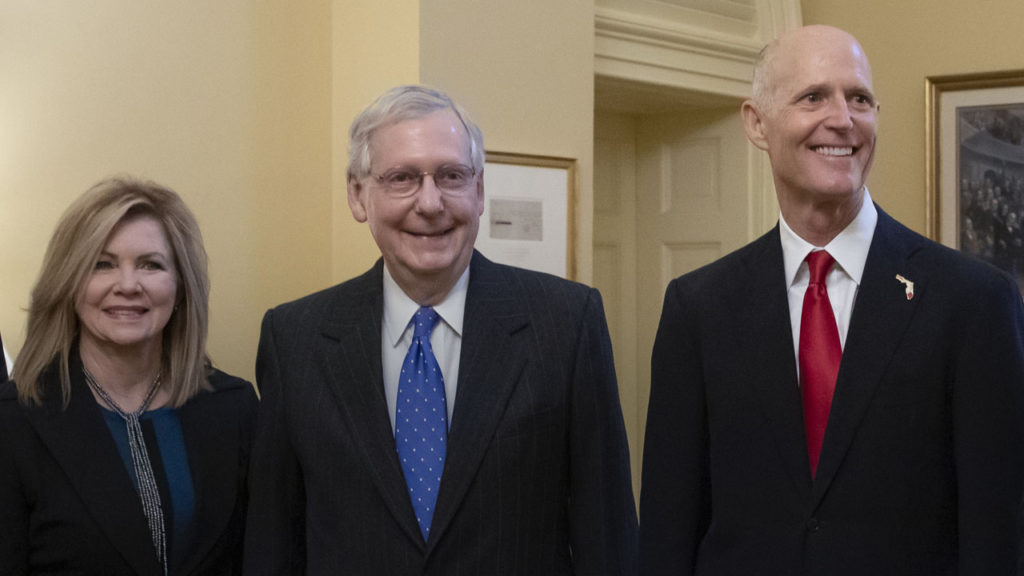 Senate Republicans also welcomed the first woman to their leadership team in years, Iowa Sen. Joni Ernst, as they sought to address the optics of the GOP side of the aisle being dominated by men.

Ernst called her selection to the leadership ranks “a great honor.”

Schumer portrayed Senate Democrats as emboldened, despite midterm losses, by an election he characterized as a rejection of the GOP tax cuts and Republican efforts to end the Affordable Care Act.

Even in the minority, Schumer said Senate Democrats will push for the party’s broader congressional agenda of lowering health care costs, investing in infrastructure and implementing good government reforms to put a check on the Trump administration, which he called “the most ethically challenged in history.”

“We will be relentless here in the Senate,” said Schumer, flanked by his leadership team. “Senate Democrats are committed to fighting to make those ideas a reality in this upcoming Congress.”

Trump has stayed largely on the sidelines ahead of elections that will determine party leadership.

The contest between McCarthy and Jordan reflected the split between the GOP’s conservative flank, whose numbers are bolstered after the election, and what remains of the centrists. It will continue to challenge the new leader.

Jordan’s entire campaign was built on the premise, lawmakers said, that Republicans lost because they didn’t “do what we said” — including on Trump’s priorities to build the border wall with Mexico.

Did Republicans Lose Because They Didn’t ‘Build the Wall’?

On Wednesday, Jordan told “Fox & Friends” the GOP lost its House majority because it didn’t deliver on promises to Americans to secure the U.S.-Mexico border, fund Trump’s wall and replace the Obama health care law.

“Some key things we told them we were going to do, we didn’t,” Jordan said.

The Ohio Republican, though, was always considered a longshot, and his run was viewed as a way to assert a greater role for the conservatives and the Freedom Caucus at the leadership table.

Conservatives have long promoted Jordan for the ranking member position on a top House committee, including the Judiciary panel, where Democrats plan multiple investigations into Trump’s businesses and administration.

Rounding out the GOP leadership team will be Rep. Liz Cheney of Wyoming, a daughter of former Vice President Dick Cheney, who wants to bring a more aggressive stance to the GOP’s communications and messaging strategy in the No. 3 spot.

In the lead-up to Wednesday’s election, McCarthy and Jordan encountered frustration, finger-pointing and questions as lawmakers sorted through an election defeat and began considering new leadership for the next congressional session.

Republicans complained about the unpopularity of the GOP tax law they blamed for losses in New York and other key states, some attendees told reporters after the meeting. Some in the meeting said Republicans should have tried harder to fulfill Trump’s priorities, like funding for the wall with Mexico. They also warned that they need a new fundraising mechanism to compete with the small-dollar online donors that powered Democrats to victory.

“There’s a little rawness still,” Rep. Mark Walker, R-N.C., who is running unopposed for a down-ballot position as vice chair of the GOP conference, told reporters outside the meeting room. “But there’s an opportunity for us to come together and get single-focused on the message.”

On the Democratic side, Pelosi remains she’s confident she’ll have enough support to win when voting gets underway after Thanksgiving, and challenged her opponents Wednesday to put forward an alternative candidate.

“Come on in, the water’s warm,” Pelosi said.

Gene-Edited Food Is Coming, but Will Shoppers Buy?