Mullens Has Sterling Debut in 49ers' 34-3 Win Over Raiders 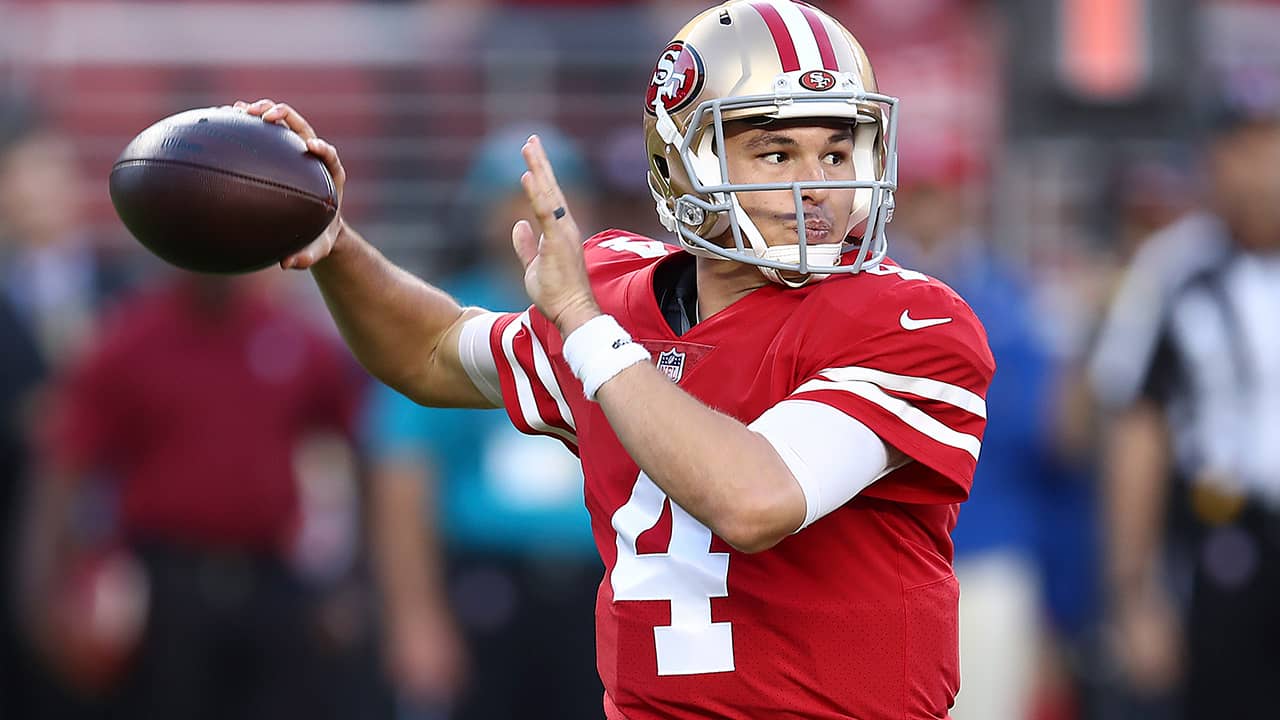 “Today’s thing was just attack your job and worry about what matters. What mattered most tonight was the team and how we played.” — Nick Mullens, San Francisco 49ers quarterback

Delivering the most productive game by a quarterback in his NFL debut since the merger leads to many accolades.

Mullens threw for 262 yards and three touchdowns and the San Francisco 49ers thoroughly dominated the Battle of the Bay, beating the Oakland Raiders 34-3 on Thursday night.

The former undrafted free agent out of Favre’s alma mater Southern Mississippi finished 16 for 22 in place of the injured C.J. Beathard and had a 151.9 passer rating, the highest for a quarterback with at least 15 attempts in an NFL debut since the 1970 merger.

“I think I’m here for a reason. This is my opportunity to prove that I can play,” Mullens said. “Today’s thing was just attack your job and worry about what matters. What mattered most tonight was the team and how we played.”

The Niners (2-7) couldn’t have played much better in snapping a six-game losing streak and winning for just the second time in two years without Jimmy Garoppolo at quarterback.

The Story of the Game Was Mullens

Mullens threw TD passes to Pierre Garcon and Kendrick Bourne on the opening two drives and connected on a 71-yard one-handed catch-and-run play to George Kittle to set up a third TD pass to Kittle. Raheem Mostert added a 52-yard TD run and the defense generated eight sacks for the first time since 2009.

But the story of the game was Mullens, got rid of the ball quickly and took advantages of several breakdowns in coverage for big plays, including the 24-yard TD pass to a wide-open Garcon on the opening drive.

“It was cool that he didn’t change under the big lights and these circumstances,” cornerback Richard Sherman said. “We’re not really surprised. We’ve seen him do it in practice. He plays with a lot of confidence.”

With Garoppolo out for the season and Beathard having lost nine of 10 career starts, the inevitable question will be whether Mullens will take over as starter for the next game Nov. 12 against the New York Giants.

The Raiders (1-7) clearly didn’t, losing for the fourth straight time, getting outscored by 85 points during the skid.

“I’ve heard a lot of negativity over the last six, seven months and rightfully so. But we’re going to build a championship football team here.” — Jon Gruden, Oakland Raiders coach

In what was perhaps the worst prime-time matchup in NFL history, only the Raiders played down to expectations. They provided little resistance on defense against an undrafted quarterback making his NFL debut, did nothing offensively after driving for as field goal on the opening drive and put together the most listless performance yet in Gruden’s second stint as coach.

Carr finished 16 for 22 for 171 yards and was sacked seven times before being replaced by AJ McCarron in the fourth quarter. McCarron was sacked once behind a banged-up offensive line.

Carr was sacked four times in the first half for the first time in his career as the Raiders struggled to provide much protection against a 49ers defense that has not generated much pressure all year. Dekoda Watson had 1 1/2 sacks in his first game of the season after getting activated from IR earlier in the day.

Former Niners receiver Terrell Owens was presented his Hall of Fame ring at a halftime ceremony. Owens was voted into the Hall of Fame earlier this year but skipped the induction ceremony in Canton, Ohio, to hold his own celebration at his college in Chattanooga, Tennessee. Owens said he was upset at the voters who made him wait three years for the honor, saying he believed they brought in off-field issues into their deliberations instead of focusing solely on what Owens did as a player.

“This is awesome,” Owens said before the game. “This is an opportunity to give something to the fans. Ever since I left in 2003 and went on and did some great things, but this is where it started my first eight years of my career.”

Raiders left tackle Kolton Miller left with a knee injury. … Mostert broke his forearm in the third quarter and will miss the rest of the season.

Neil Young Acknowledges He and Daryl Hannah Are Married