Sandy Koufax, Jackie Robinson and the Boys of Summer. Ted Williams to Yaz and the Impossible Dream.

Yet for all their rich history — dating back to Babe Ruth on the mound — the Boston Red Sox and Los Angeles Dodgers have rarely crossed paths heading into this World Series. Only once before in October, and that was more than a century ago.

Kershaw Has Never Even Pitched at Fenway Park

In fact, Clayton Kershaw has never even pitched at Fenway Park.

Consider this: Going into Game 1 on Tuesday night, the Dodgers have beaten the Red Sox in Boston just one time.

Alex Cora, now the rookie manager of the Red Sox. One of his teammates that afternoon — Dave Roberts, ready to lead Los Angeles into its second straight Fall Classic.

Roberts is sure to draw a big cheer when the teams line up for pregame introductions. He’s still a fan favorite in Boston for his daring stolen base that sparked an unprecedented comeback from a 3-0 deficit against Mariano Rivera and the rival Yankees in the 2004 AL Championship Series.

The Red Sox went on to end their 86-year title drought by sweeping St. Louis in the World Series, boosted by Big Papi, Pedro and Manny. Starting this week, Boston will try for its fourth championship in 15 seasons.

“I’m looking forward to going back to Fenway. Obviously for me personally, I have a lot of fond memories of the Red Sox and Fenway Park.” — Dave Roberts, Los Angeles Dodgers manager

“I’m looking forward to going back to Fenway. Obviously for me personally, I have a lot of fond memories of the Red Sox and Fenway Park,” Roberts said. “To be wearing another uniform going in there playing for a World Series championship is going to be special for me.”

This also marks the first time both Series managers have played for each team.

“The weather. Traffic,” Cora said Sunday about the varying locales.

MVP candidate Mookie Betts and the Red Sox posted a team-record 108 wins, a big payoff for the team with the top payroll in the game. Boston pushed past New York in the AL Division Series and then quickly dispatched the defending champion Astros in the ALCS.

A tremendous right fielder, Betts might move to second base when the Series shifts to Dodger Stadium. That would be to make room for slugger J.D. Martinez when the Red Sox lose their designated hitter slot. 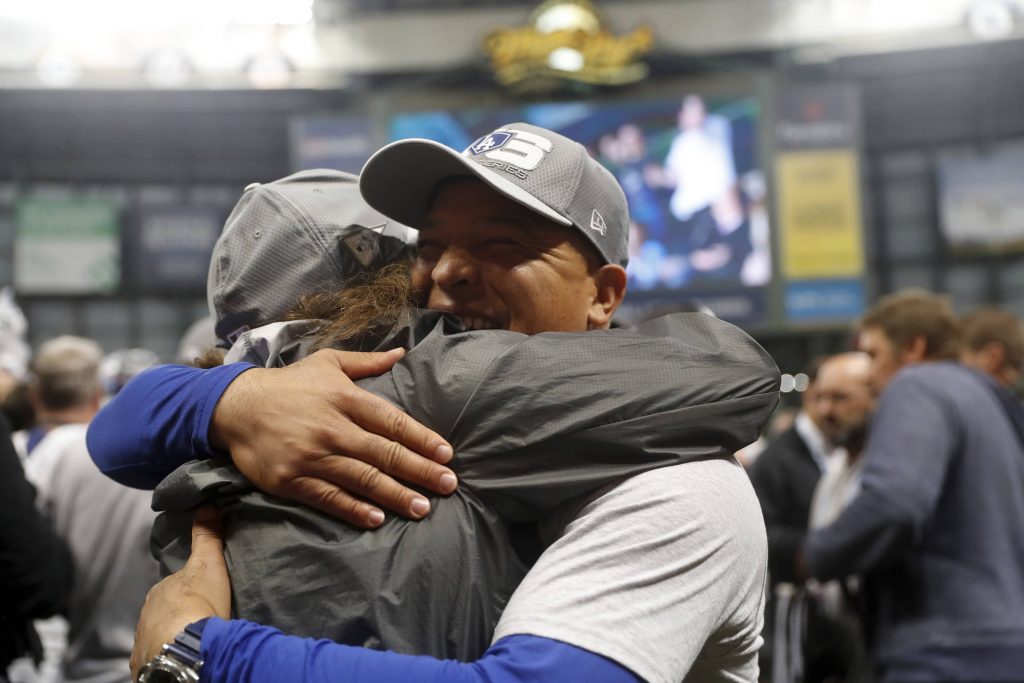 Boston opened as a slight betting favorite over Los Angeles.

“It doesn’t matter how you get there. But to get to come back and go back from last year, it’s unbelievable. Where we came from this year, it’s a testament to these guys, man. It’s a great group. We’re excited.” — Clayton Kershaw, Los Angeles Dodgers pitcher

“That’s the best team in the game right now. We respect that,” Dodgers closer Kenley Jansen said. “But know that we’re good.”

Chris Sale is set to pitch the opener for the Red Sox. He recently spent a night in the hospital because of a stomach illness, and no doubt watchful eyes will be on the lefty ace.

Los Angeles is aiming for its first championship since Kirk Gibson, Orel Hershiser and Tommy Lasorda brought home the crown in 1988.

A year after dropping Game 7 at home to Houston, Justin Turner and the crew with the third-highest payroll beat Colorado in a tiebreaker for the NL West title, chased Atlanta in the NLDS and topped Milwaukee 5-1 on Saturday night in Game 7 for the pennant.

“It doesn’t matter how you get there. But to get to come back and go back from last year, it’s unbelievable,” Kershaw said. “Where we came from this year, it’s a testament to these guys, man. It’s a great group. We’re excited.”

The Power-Packed Dodgers This Season

New to the power-packed Dodgers this season is star shortstop Manny Machado, acquired in a July trade with Baltimore. Boston fans are plenty familiar with him — his late slide last year injured longtime Red Sox second baseman Dustin Pedroia, and led to a tense situation at Fenway with Sale throwing behind Machado.

Soon as they see him, Red Sox rooters might even take up the familiar chant of “Beat LA!”

It’s been heard for years in Boston, albeit in a different arena. That’s what Celtics fans echoed during the Larry Bird-Magic Johnson rivalry. Fitting, maybe, the former Lakers star is a part-owner of the Dodgers.

On the basketball court, Los Angeles and Boston are certainly intertwined with championships on the line, going all the way back to the days of Bill Russell, Elgin Baylor, Bob Cousy and Jerry West.

On the diamond, not so much for these formidable franchises.

They first tangled for real in the 1916 World Series. The Babe pitched all 14 innings — in a tidy 2 hours, 32 minutes — as Boston beat Brooklyn 2-1 in Game 2. Though Fenway opened four years earlier, the game was played at Braves Field, home of the city’s NL franchise, because it held more people.

The Red Sox wound up winning in five games. Back then, the Dodgers weren’t really the Dodgers. They were known by a collection of nicknames, and were often called the Robins because of popular manager Wilbert “Uncle Robbie” Robinson. And Ruth later coached for them.

Overall, the Red Sox are 8-7 against the Dodgers since interleague play began in 1997. Boston hasn’t hosted LA since 2010, and the teams haven’t squared off since 2016.

Over the years, the teams went their own ways, on and off the field.

The Dodgers proudly broke baseball’s color barrier when Jackie Robinson played in 1947. The Red Sox were the last team in the majors to have a black player, in 1959 with Pumpsie Green.

Decades later, the teams made history together. They drew an announced crowd of 115,300 — the largest ever for a baseball game — for an exhibition at the Coliseum in 2008 to mark the 50th anniversary of the Dodgers’ move to Los Angeles.

Overall, the Red Sox are 8-7 against the Dodgers since interleague play began in 1997. Boston hasn’t hosted LA since 2010, and the teams haven’t squared off since 2016.

Not much crossover for these clubs, either.

A Hot World Series on Deck

Buckner was a young, fleet outfielder when he helped the Dodgers reach the 1974 World Series. He was a gimpy first baseman when he let that ball roll through his legs as Boston blew the 1986 Series.

Pedro Martinez began his big league career as a reliever with Los Angeles before becoming a dominant starter for Boston. Manny Ramirez was an eccentric slugger for the Red Sox who took his act to Mannywood out West.

Nomar Garciaparra, Adrian Beltre and Rickey Henderson are among the stars who spent time with both teams. So has Dodgers starter Rich Hill — in 2015, the Boston-area native was pitching with the independent Long Island Ducks when he resurrected his career with the Red Sox.

And there was that late-season trade six years ago that sent Adrian Gonzalez, Josh Beckett and Carl Crawford from Boston to Los Angeles in a huge salary dump.

Big names will be in the stands next week, too.

Matt Damon, Ben Affleck and a packed crowd bundled on a New England night, maybe. It could be in the upper 30s at Fenway, the oldest ballpark in the majors.

Warren Beatty, Ashton Kutcher and sun-splashed fans basking in the glow of the San Gabriel Mountains. It was a record 103 degrees for the opener last year at Dodger Stadium, at 56 the third-oldest park.

Whatever the temperatures, Dodgers-Red Sox, a hot World Series on deck.