Opening night last year delivered a good forecast of how the NBA season would turn out.

Cleveland edged Boston in the opening game before Houston ruined Golden State’s championship ring celebration with a victory over the Warriors in the nightcap.

Those teams ended up as the last four standing in the 2017-18 season, with both conference finals going seven games.

Golden State and Cleveland won Game 7s on the road before the Warriors swept the Cavaliers for their second straight title.

The matchups this time in the doubleheader Tuesday night on TNT feature the Celtics hosting Philadelphia, and the Warriors welcoming Oklahoma City.

Golden State remains the team to beat and the Celtics are a good bet to inherit that role in the East with LeBron James gone, so it’s very possible a couple teams playing on the first night of the season will also be playing on the last. Particularly the Warriors.

Most teams don’t begin until Wednesday, and James’ first regular-season game with the Lakers doesn’t come until Thursday, when they visit Portland.

Some things to know about the upcoming season:

James starts what could be a challenging first season with his new team by trying to snap a record winning streak. The Trail Blazers have won 17 consecutive home openers, a streak that began in October 2001 — two years before James made his NBA debut.

San Antonio usually enters the season as a sure thing, but the Spurs this time are a question mark. Decimated by injuries in their backcourt during the preseason after losing Kawhi Leonard, Tony Parker and Manu Ginobili in the offseason, the Spurs are no lock for a 22nd straight playoff appearance that would equal the NBA record set by the Syracuse Nationals/Philadelphia 76ers from 1949-71.

But figure on San Antonio starting fast, as the Spurs are 19-2 in season openers under Gregg Popovich, who begins his 23rd season to tie Utah’s Jerry Sloan for the most seasons coaching one team. 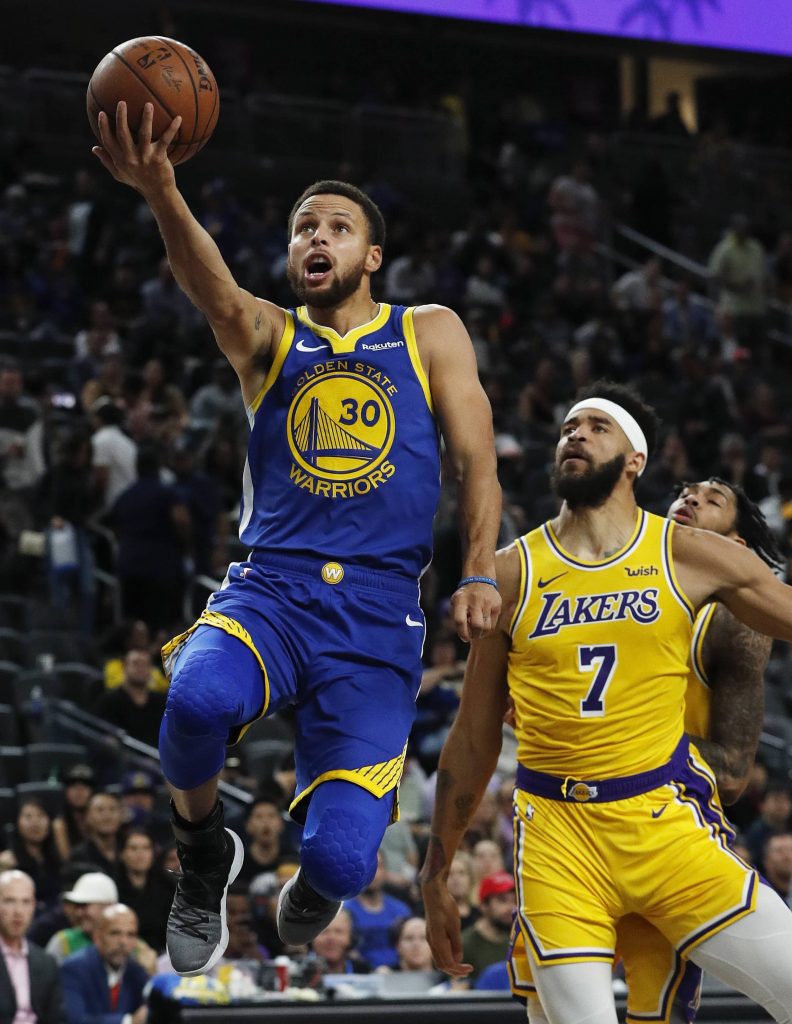 Perhaps the Warriors’ dominance makes it feel like a foregone conclusion, but there’s already so much talk about the summer of 2019 free agency, when players such as Kawhi Leonard, Jimmy Butler and Kyrie Irving could be available, that it already threatens to overshadow the games themselves.

Even Golden State isn’t immune, with Kevin Durant and Klay Thompson able to become free agents and sparking talk that this could be the Warriors’ last run.

This season, fans can for the first time purchase games in progress on NBA League Pass. The option is available from the end of the third quarter to the end of the game for $1.99. Details are available at http://www.nba.com/leaguepass.

Voting for the MVP

James led a record nine players who received votes as the MVP favorite in the NBA.com GM Survey, garnering 30 percent of the vote among those who responded.

They added a likely future Hall of Famer to a team that just won a league-high 65 games, but it’s hard to know just how much Carmelo Anthony will help the Rockets — or if he will help at all.

He comes off his worst season in Oklahoma City and didn’t thrive playing for Mike D’Antoni in New York. But his outside shooting seems a natural fit with the Rockets, especially with the open looks Harden and close friend Chris Paul should set up for him.

New draft lottery odds debut this season. The teams with the three worst regular-season records will each have a 14 percent chance of winning the lottery, replacing the system that gave the team with the worst record a 25 percent chance of the top pick.

“I do think in this league anything can happen so there’s some teams in the Western Conference, if clicking right, if healthy — injuries play a role not just for the Warriors but throughout this league — so that can play a part in it.” — Mark Jackson, former Warriors coach

The league hopes that will reduce some of the incentive to lose on purpose, but Commissioner Adam Silver has said there’s still work to do to completely eliminate tanking.

After a record four years of the same NBA Finals matchup with Golden State and Cleveland, the NBA seems headed for something new.

The Warriors remain the class of the league, but Boston matches up with them better than the Cavaliers did, even with James. So Golden State should win a third straight title, but not without a much tougher fight than the last couple of seasons.

“I do think in this league anything can happen so there’s some teams in the Western Conference, if clicking right, if healthy — injuries play a role not just for the Warriors but throughout this league — so that can play a part in it,” former Warriors coach Mark Jackson said. “But the Warriors are the clear-cut favorite.”