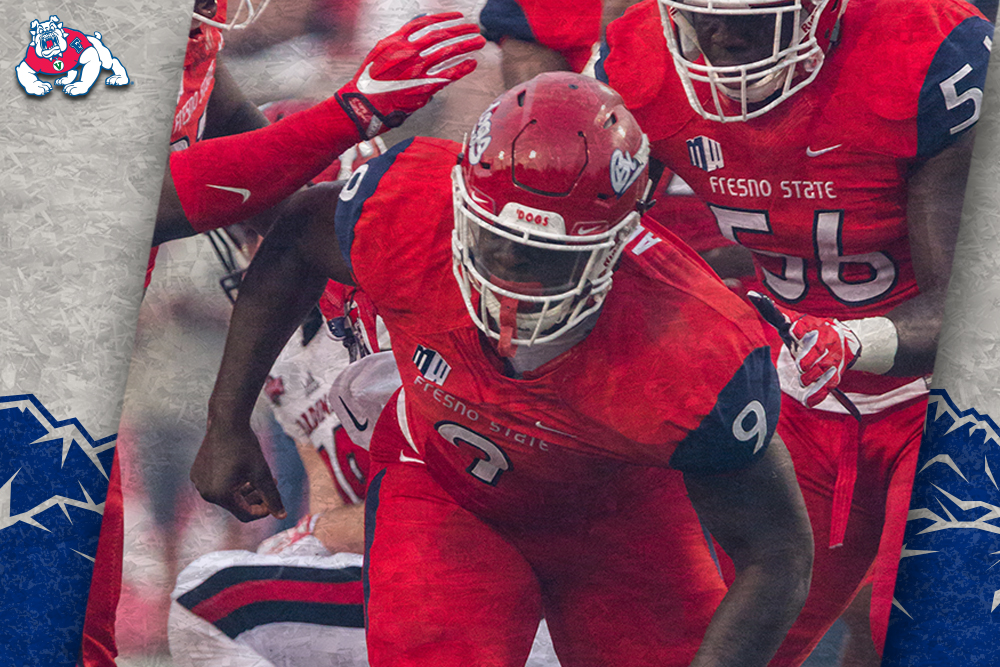 Based on how they played against a common opponent — Toledo — Fresno State’s Mountain West Conference football opener against Nevada figured to be a wide-open, high-scoring affair.
But points were at a premium Saturday in Reno as the Bulldogs relied on a stout defense led by junior linebacker Jeff Allison to grind down the Wolfpack 21-3 in the cold and the rain,
The victory improved Fresno State’s overall season record to 4-1.
Allison had a career-high 17 tackles, including 10 solo stops. Two other Bulldogs linebackers also stopped the Wolf Pack in their tracks throughout the game. Senior George Helmuth added 11 tackles and senior James Bailey tacked on 10 tackles, 2.5 tackles for loss and one sack. The secondary intercepted three passes.
For the record, Fresno State defeated Toledo 49-27 and Nevada lost to Toledo 63-44 earlier this season.
As it turned out, playing the comparative scores game was not an accurate barometer of what was to come Saturday — other than a Fresno State victory.
“It is a win and that is always what is important,” said Fresno State Coach Jeff Tedford. “They really did a nice job against our run, we really could not get anything going. We got stuck in a lot of long-yardage situations. We did not play our best offensively and thought our defense played well and kept them out of the end zone.”
The Bulldogs are at home this Saturday against Mountain West rival Wyoming. The Cowboys are 0-2 in conference play and 2-4 overall.

On the offensive side for the Bulldogs, Marcus McMaryion was 20-of-28 passing for 241 yards and Ronnie Rivers scored two touchdowns — one on a 19-yard pass in the second quarter.
Wide receiver KeeSean Johnson, also had a touchdown grab and finished with seven receptions for 65 yards.
Fresno State (4-1, 1-0 Mountain West), which came in averaging 45 points and 439.8 total yards per game, was limited to a season-low 271 yards.

Bulldogs Led 7-3 at the Half

Rivers took a screen pass 19 yards for a score with 13:11 left in the second quarter and, after Nevada’s Ramiz Ahmed made a 41-yard field goal, the Bulldogs took a 7-3 lead into halftime.
On fourth down, Rivers scored on a 2-yard run early in the third quarter and Johnson’s 27-yard TD reception capped the scoring midway through the fourth.
Cristian Solano was 22-of-43 passing for 195 yards with three interceptions and added 23 carries for 71 yards for Nevada (3-3, 1-1). Kaleb Fossum had 12 receptions for 97 yards.

In becoming the first visiting coach since 2000 to beat Boise State twice on the school’s famed blue turf with a 19-13 upset on Saturday afternoon, San Diego State Coach Rocky Long shrugged off the distinction. He seemed more concerned with trying to keep his young team focused and harnessing all the talent.
“We had 19 freshmen and redshirt freshmen to make the trip,” Long said. “And half of them played. Sometimes they do unusual things — and it’s not always what they’re coached to do.”
In the first half, one of his freshmen muffed a punt that Boise State recovered at the San Diego State 4-yard line to set up a touchdown.
But with the Aztecs clinging to a tenuous 13-7 lead in the fourth quarter, Jordan Byrd, another one of Long’s freshman, ripped off a 72-yard touchdown run to all but seal the victory.