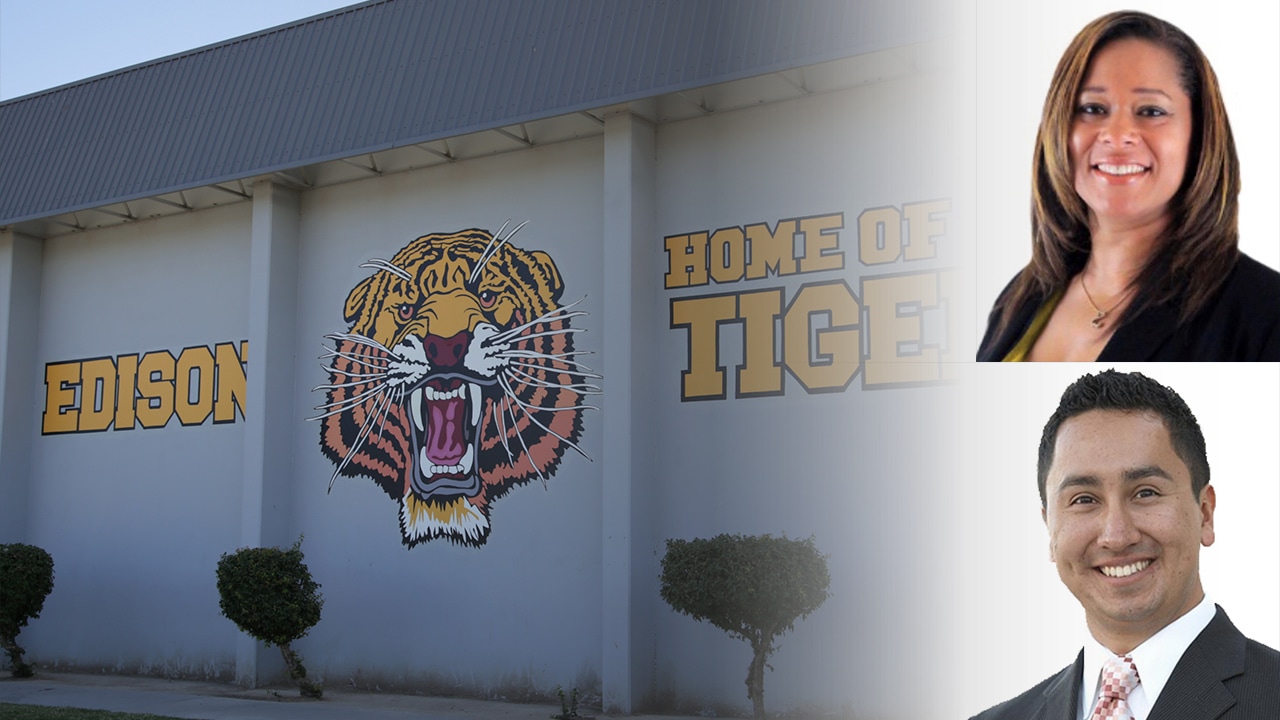 The November election will bring new representation for the Edison High School area on the Fresno Unified school board.
After 12 years as a trustee, Lindsay Cal Johnson decided not to run for re-election.
He will exit having made good on perhaps his biggest promise to Edison area families: The opening of a new middle school  — Rutherford B. Gaston — in 2014.
Enter candidates Robert Fuentes, a civil rights attorney, and Keshia Thomas, a former teacher who has a master’ degree in education.
Interviews with the candidates suggest that improving educational equity, expanding classroom offerings and improving college and career readiness are among the top issues.

Fuentes was born in Fresno and raised in both Fresno and Porterville.


“I am optimistic about being able to create some real change.” — Robert Fuentes, candidate for Area 1 trustee
He graduated from Granite Hills High School in Porterville and went on to earn degrees from Stanford University, Harvard’s Kennedy School and Yale Law School.
Fuentes works as a civil rights attorney but noted that his focus will be on the school board if he wins this race.
Fuentes credits the opportunity to chart his own career and educational path as the key to his success — an opportunity he believes many students in Fresno Unified don’t have and, if elected, he plans to fix.
“A lot of the issues that Fresno Unified students are facing, I’ve experienced myself,” Fuentes said. “I believe that I can serve on the school board and help create more opportunities for young people, especially in partnership with educators and community members.”

On Fuentes’ list of priorities are educational equity and college and career readiness.
With the former, Fuentes said he wants to focus on the student population as a whole, especially narrowing the achievement gap experienced by African American students and English-language learners.
“There is an initiative geared towards African American students, there is an expansion of dual-language immersion programs and so I want to keep scaling those up,” Fuentes said.
To help students become more prepared for life after high school, Fuentes said he plans on expanding not only the district’s college-preparatory courses but also college prep resources and training.

Fuentes said expanding the district’s career technical education programs in partnership with trade communities is vital.
“Expanding those programs so that young people who want to pursue a vocational career are learning the skills they need to succeed in that career and hopefully that can lead into good-paying jobs out of high school,” Fuentes said.
Addressing the needs of the diverse student population is not something that should happen, but something that must happen, Fuentes said.
“We have one of the biggest school districts in the state and one of the most diverse,” Fuentes said. “I want to see a school district that addresses those needs in partnership with the city, with community-based organizations, and with health clinics.
“I am optimistic about being able to create some real change.”

Thomas was born and raised in southwest Fresno.


“We should be excellent and that is where I want to take us.” — Keshia Thomas, candidate for Area 1 trustee
She graduated from Bullard High School and National University in Fresno.
Until recently, she worked as a math teacher at McLane High School. She is now self-employed.

Raised in the projects of west Fresno and having lost her mom at the age of 13, Thomas says she has an ability to relate to students who have had similar hardships and help them succeed in the classroom.
“My goals have always been to help students and to be there for them and to be a person they can lean on when they are having trouble,” Thomas said.
Thomas also believes it’s important to educate students about the people in their community.
As the assistant director of the local Woman’s Missionary Union, Thomas and her students would feed the homeless every first Saturday of the month. It’s a tradition her grandmother started 40 years ago.
“We go out there and we see what it is like because if you don’t know, how can you compare your life to somebody else’s or what bad luck they may have had,” Thomas said.

Thomas cites the opportunity to help more students as the reason she is running for school board.
“Instead of touching 160 kids in one year, I have 74,000 students that I can help,” she said.
The mother of a child enrolled in a special education program, Thomas said one of her goals as a school board member would be to ensure the district’s special ed programs are solid.
“It is difficult for our kids already, and if you are not feeling like you are up to par with the other kids, it kind of makes you feel kind of secluded and not the same, and I never want kids to feel that way,” Thomas said.

Wants Fresno Unified to be Best in California

Getting African American students and English-language learners on par with other students is another goal for Thomas.
“African Americans have been behind the longest, and they are the farthest statistically and so are our EL students, and that needs to change,” Thomas said. “Our Latino students aren’t that much further so evidently it is something that we are doing that we need to change for the betterment of our entire school district.”
Thomas believes these changes will help make Fresno Unified “the best school district in California.”
“We are the fourth largest, why aren’t we the best?” Thomas said. “We should be excellent, and that is where I want to take us.”

(Interactive map showing the schools within the boundaries of FUSD Area 1.)

How 65 Women Came to Kavanaugh's Defense in Matter of Hours

Trump's Tariffs Could Sow Trouble for GOP in Farm Districts