Is Jose Ramirez the Best Boxer Ever from Fresno Area? 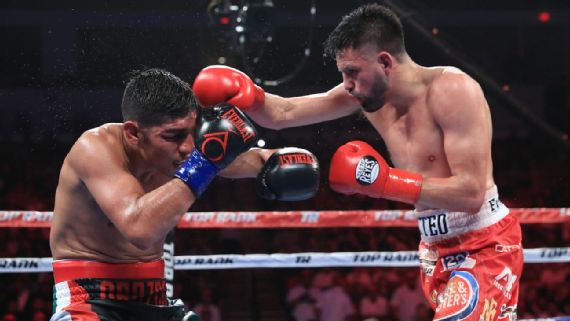 Welterweight titleholder Young Corbett III was knocked out by the great Jimmy McLarnin in Corbett’s first title defense in 1933 at Wrigley Field in Los Angeles.
IBF featherweight titleholder Hector Lizarraga also fell in his first world title defense. He lost a unanimous 12-round decision to crafty Manuel Medina in 1998 in San Jose, and I was there to see it.
So how does Ramirez compare to the local legends who came before him?

I rank him higher than hard-punching heavyweight Mac Foster, who rattled off 24 straight knockout victories to start his career only to get stopped by Jerry Quarry at Madison Square Garden in 1970. “Mac the Knife” went on to fight Muhammad Ali, losing a 15-round decision, but he never fought for a world title.

I rank him higher than “Irish” Wayne Thornton, the rugged light-heavyweight who defeated such all-time greats as Willie Pastrano and Eddie Cotton in the mid-1960s but lost his only shot at the title — to Hall of Famer Jose Torres at Shea Stadium in New York City.

And, to my eyes, Ramirez’s accomplishments and skills, surpass those of Lizarraga, a determined boxer who willed himself to a world title with the odds stacked against him. Lizarraga began his career in obscurity and often had to fight on the road, where overcoming “hometown” decisions and judges seeking to please local promoters sometimes is difficult.

But, even with this impressive victory Saturday night at the Save Mart Center, the 23-0 Ramirez has yet to eclipse Corbett, the Italian-born southpaw who sold newspapers on Fresno street corners and started boxing in four-round bouts at age 14.
First of all, Corbett is enshrined in the International Boxing Hall of Fame. This testifies to the high regard that the boxing world has for Corbett’s record.
During his career as a welterweight and later a middleweight, the man born Raffaele Capabianca Giordano defeated many fellow Hall of Famers. That list includes Billy Conn, Fred Apostoli and a boxer some experts rank among the all-time pound-for-pound greats, Mickey Walker.
Corbett also defeated Young Jack Thompson, Ceferino Garcia, and Gus Lesnevic — all of whom would later win world titles.
Unfortunately for Corbett, he later lost a world middleweight title challenge against Apostoli in 1938 at Madison Square Garden.

Ramirez Has What It Takes to Become the Greatest

Boxing was much different in Corbett’s era than it is today. Boxers fought much more frequently. They had to if they were to put food on the table. Rematches were commonplace. And a loss wasn’t as devastating as it is now in terms of marketability.
Ramirez has much going for him. He keeps himself in great shape and appears to have the focus required to become one of the all-time greats. He’s aggressive, pressing the fight against opponents. His body shots sap the strength and morale of opponents. And he’s promoted by the legendary Bob Arum.

Grizzlies Search for New Parent Team. Scratch the Brewers Off the List.