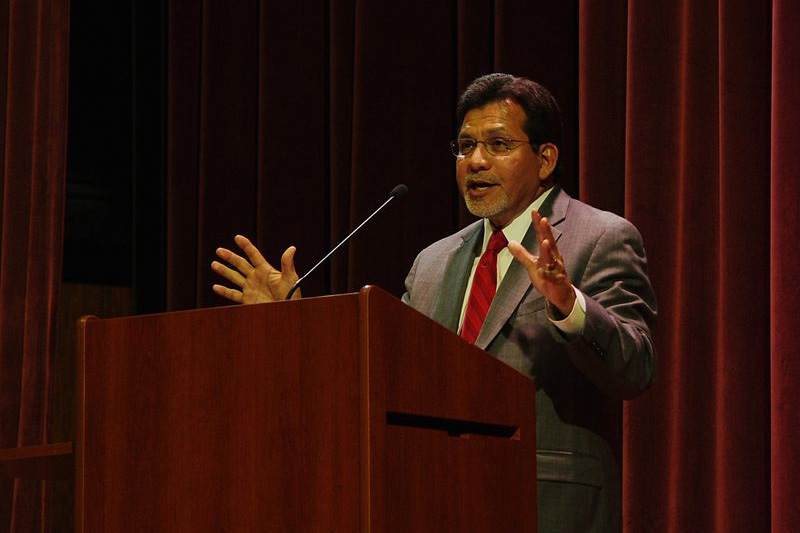 Alberto Gonzales, former U.S. Attorney General for President George W. Bush, will be the keynote speaker at Reedley College’s fifth annual Constitution Week Conference.
Gonzales was born in San Antonio, Texas and is the second of eight children. His father was a migrant and construction worker.
He obtained his bachelor’s at Rice University in 1979 and a juris doctor degree from Harvard Law School.


“He started out with humble beginnings in Texas and worked his way up to becoming the first Hispanic attorney general, and we thought that, all in all, it was a great opportunity for the college, for our students and for the community.” — Bryan Tellalian, political science instructor at Reedley College
Gonzales was a Texas Supreme Court justice before becoming U.S. attorney general. He is now the dean at Belmont University’s College of Law.

Chosen For His Expertise

The college invited Gonzales to speak for several reasons.
“There has been a lot of activity in the executive branch and since he has first-hand experience in dealing with the Department of Justice and how they operate at the White House and the relationship between the two interacting with Congress, we thought he would be somebody who would be able to speak on that,” said Bryan Tellalian, a political instructor at the college.
Tellalian also said that the life story of Gonzales might inspire students to elevate their goals.
“He started out with humble beginnings in Texas and worked his way up to becoming the first Hispanic attorney general, and we thought that, all in all, it was a great opportunity for the college, for our students and for the community,” Tellalian said.
For students to walk away from Gonzales’ speech believing they can have an impact on public discourse and public policy is the ultimate goal, Tellalian said.
“We have a lot of confidence in our students and we want to give them every opportunity to grow and develop in their academics and also their personal and career goals,” Tellalian said.

Gonzales will give his speech at 6:30 p.m. Friday, September 21 in the college cafeteria.
The event is free and open to the public. Non-faculty parking is also free.
Constitution Week started five years ago as a way to deepen students’ understanding of the Constitution and their rights and duties as citizens, Tellalian said.

Other Speakers and Panelists

There will be several other government officials and legal experts involved in the activities, which begin on Wednesday, Sept. 19, and are capped by Gonzales’ talk.
Among them: Cameron Quinn, who is the officer for civil liberties and civil rights for the U.S. Department of Homeland Security; Assemblyman Jim Patterson, and Crystal Ragan, who is a member of Rep. Devin Nunes staff.
“These are folks that deal with the Constitution on a day-to-day basis, and so we wanted our students and the broader community to learn from their insights,” Tellalian said.
You can view the full schedule and list of participants at this link.

Fresno State’s Leon S. Peters Ethics Lecture Series will start with Constitution Day.
The segment, titled “Constitution Day: Dialogue for Democracy,” will run from 9 a.m. to noon on Saturday, Sept. 15, in Fresno State’s North Gym, Room 118.
The event will feature a dialogue about the Constitution and the state of democracy with table conversations, a mock ballot, and expert panels. Topics include immigration and the judicial branch.
Federal Magistrate Judge Erica Grosjean, Fresno County Superior Court Judge Mark Cullers, and California Appellate Court Judge Mark Snauffer are among the speakers and panelists.

The event is free and open to the public.
For more information, visit this link or contact Ethics Center Director Andrew Fiala via email at afiala@csufresno.edu.
Related Topics:Constitution DayConstitution Week ConferenceEthics Lecture SeriesFresno StateReedley College
Up Next

Top 12 Photos of the Week