Assemblyman Jim Patterson of Fresno again called for an audit of the Department of Motor Vehicles after it was revealed Wednesday that agency technicians may have botched about 23,000 Californians’ voter registrations under the state’s new “motor voter” law.

The error did not allow anyone living in the country without authorization to register to vote, DMV officials said.

Patterson, a DMV critic, took to Twitter to voice his frustration with the agency. He used the hashtag #AuditTheDMV on the tweet.

I’m not surprised. It’s one thing to wait in long lines, but quite another to walk in to the DMV registered one party and walk out registered in another. The @CA_DMV cannot be trusted to police itself. https://t.co/lVjCW59H2z #AuditTheDMV

“I believe this is just the tip of the iceberg. Something is being covered up that must be found, disclosed and fixed,” Patterson, a Republican, told GV Wire in a statement.

Last month, the Legislature’s joint committee on audits declined to move forward with Patterson’s request to audit the DMV. Patterson cited hours-long wait times experienced by motorists at DMV offices throughout the state and agency mismanagement in asking for the audit.

Meanwhile, Padilla pulled no punches after learning about the botched voter registrations.

“I am extremely disappointed and deeply frustrated that DMV’s administrative error caused inaccurate voter registration data to be transmitted to elections officials,” Padilla said in a statement. “The DMV has assured us that they have taken necessary actions to prevent this from occurring again.”

The news comes as the DMV faces backlash for long waits at some of its offices that spurred public outcry and prompted hearings last month in the state Legislature.

Wait times improved by an average of 30 minutes statewide between July and August, the agency reported to lawmakers Wednesday.

DMV officials say they have hired more staff and brought back retired workers to speed up transactions. They blamed new technology, the new motor voter law and federal security standards known as Real ID for the delays.

Shiomoto called the wait times unacceptable when testifying at the hearings. She vowed to fix the problem.

The agency says customers without an appointment spent an average of 100 minutes waiting during the week ending Aug. 25.

Wait times vary significantly, from a low of three minutes for customers with an appointment in Napa or Fall River Mills to a high of 158 minutes for walk-ins in West Covina.

Assemblywoman Catharine Baker, a Republican from the San Francisco Bay Area, says reports she’s heard from her constituents and staffers who have visited DMV offices in her district don’t align with the rosier picture painted by the agency. 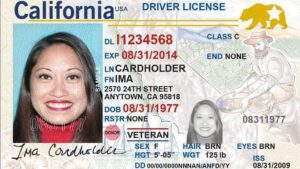 “I have zero confidence in the numbers we’re receiving from the DMV,” she said. “It was apparent in not one but two hearings they had no reliable way to assess the scope of their own wait-time problem.”

The Real ID standards were passed in the wake of the 9/11 terror attacks and require new ID cards to carry special markings.

Lawmakers have given the DMV millions of dollars in additional funding to accommodate higher demand as Californians update their licenses to comply with the security requirement.