Grabowski owns an ocular prosthetics company. His wife, Tabby, was among nine people injured in a deadly collision of two boats Saturday. She is recovering in a Las Vegas hospital.

A portion of the river near Lake Havasu remains closed as divers search for others still missing from the boat crash.

MOABI REGIONAL PARK, Calif. — The body of a Visalia woman who was among four people missing after two boats collided on the Colorado River was found Monday, authorities said.

Christine Lewis, 51, of Visalia was discovered in a section of the river along the California-Arizona border at about 7:30 a.m., Mohave County Sheriff’s Office spokeswoman Anita Mortensen said.

Lewis was among more than a dozen people ejected from the boats in the crash Saturday night.

“We are deeply saddened to hear about the horrible crash on the Colorado River. We know that there will be families right here in Tulare County grieving the loss of their loved ones for days, months and years to come and our hearts absolutely go out to them.” — Tulare County Sheriff Mike Boudreaux

A search continues for two other women and one man who are presumed dead by authorities.

“We are deeply saddened to hear about the horrible crash on the Colorado River,” Boudreaux said. “We know that there will be families right here in Tulare County grieving the loss of their loved ones for days, months and years to come and our hearts absolutely go out to them.”

Lewis, along with several others, went overboard after a boating collision Saturday evening.

The family of two missing women, Kirra Drury and Raegan Heitzig, both of Ventura, reached out to Facebook in hopes the community would help find their loved ones.

Heitzig grew up in Visalia and graduated from El Diamante High School, according to her Facebook profile, the Visalia-Times Delta reported.

“Please pray and keep eyes out for these four people if you are in the surrounding areas,” the family said via Facebook.

Tabby Grabowski, a Tulare Union High School teacher, and Jordan Heitzig were airlifted to a hospital in Las Vegas. Brian Grabowski is missing. 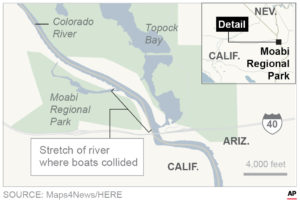 Both boats sank, and passing boaters pulled crash victims from the water. Nine people were injured, with two in critical condition, authorities said.

The cause of the crash is being investigated.

None of the boaters were wearing life jackets, which aren’t required but are recommended by authorities, Mohave County Sheriff Doug Shuster said.

“Unfortunately, it is all too common we have accidents on the Colorado River,” Schuster said. “This case is a prime example. No one was wearing a life jacket. It’s not mandated but we certainly encourage folks to do so because of situations just like this.”

The crash occurred between two popular marinas and near Moabi Regional Park, as people enjoyed the Labor Day weekend.

Search Will Continue Until Bodies Are Found

Helicopters have been deployed as part of the search, and authorities have scoured the shoreline. Divers have been sent into the river, which can run as deep as 30 feet.

“These efforts will continue until all of those who are missing and unaccounted for have been located,” Shuster told reporters.