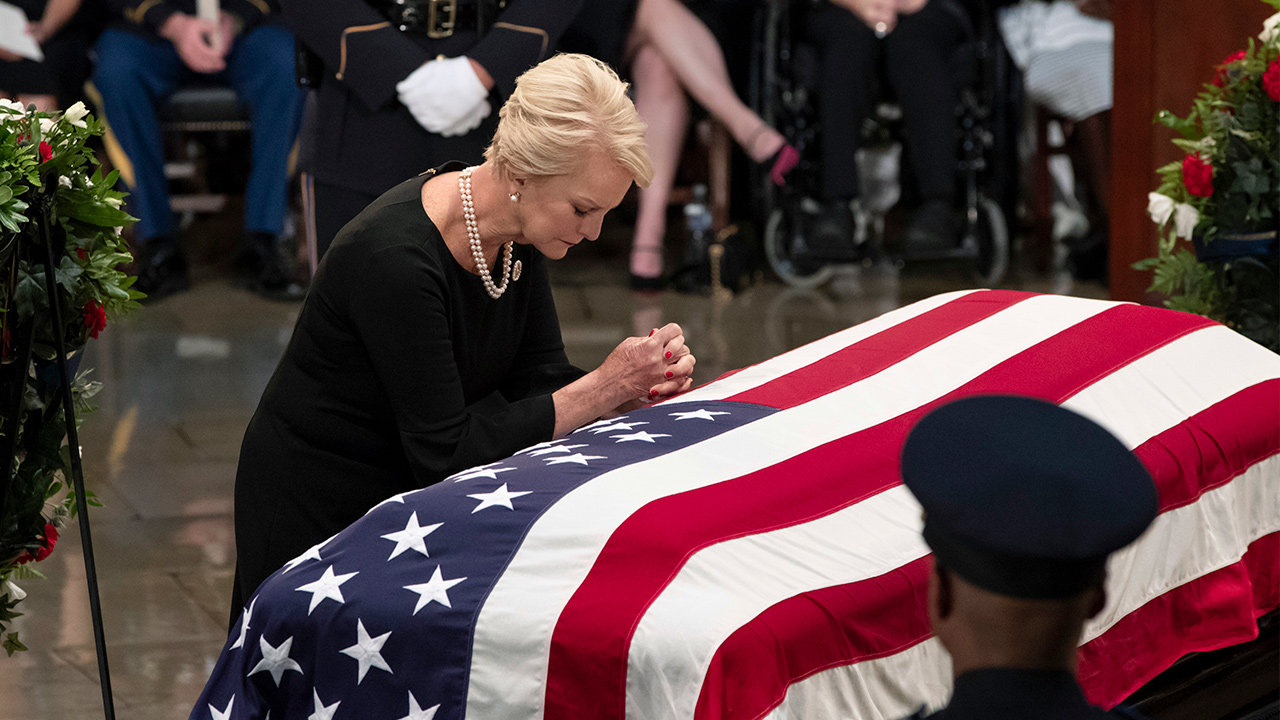 The First of Two Days of Services

House Speaker Paul Ryan called McCain “one of the bravest souls our nation has produced.”
McCain, a former Navy aviator, really did “talk like a sailor,” Ryan said, drawing smiles from the crowd. “But you see, with John, it wasn’t feigned disagreement. The man didn’t feign anything. He just relished the fight.”


“But you see, with John, it wasn’t feigned disagreement. The man didn’t feign anything. He just relished the fight.” — House Speaker Paul Ryan
Vice President Mike Pence said he didn’t always agree with McCain, but said his support for limited government, tax reform and the military “surely left our nation more prosperous and more secure.” McCain “served his country honorably,” Pence said.
The ceremony was the first of two days of services in Washington honoring the Arizona senator, who served in Congress for 35 years.
On Saturday, McCain’s procession will pause by the Vietnam Memorial and head for Washington National Cathedral for a formal funeral service. At McCain’s request, two former presidents — Democrat Barack Obama and Republican George W. Bush — will speak.
President Donald Trump, who has mocked McCain for being captured during the Vietnam War, was asked to stay away, people close to the White House and the McCain family said. However, Pence said, “As President Trump said yesterday, we respected his service to the country.”

Putting Him Back in the Spotlight

McCain’s funeral puts him back in the spotlight a few miles from Trump’s doorstep, in the city where the senator, who died last Saturday at 81, worked and collected friends and enemies, some in both camps at different times. The procession was highlighting what McCain found important, some of which contrast with Trump’s style and priorities.
Other officials also represented the administration in Trump’s hard-to-miss absence. Defense Secretary Jim Mattis greeted the McCain family Thursday night when the senator’s casket was flown into Joint Base Andrews, Maryland.
McCain chose a Russian dissident as a pallbearer, though Trump has professed repeatedly his affinity and admiration for Russian President, Vladimir Putin — praise that came amid special counsel Robert Mueller’s probe into Russian meddling in the 2016 presidential election.
The procession’s pause at the Vietnam Veterans Memorial, where McCain’s widow, Cindy, is expected to lay a wreath, will highlight McCain’s military service and his more than five years as a prisoner of war.
Trump obtained deferments during the Vietnam War for his college education and then for bone spurs in his heels. Trump on Friday was expected to leave Washington in early afternoon, to head to North Carolina for an event on retirement security about the same time the public will start filing past McCain’s casket. 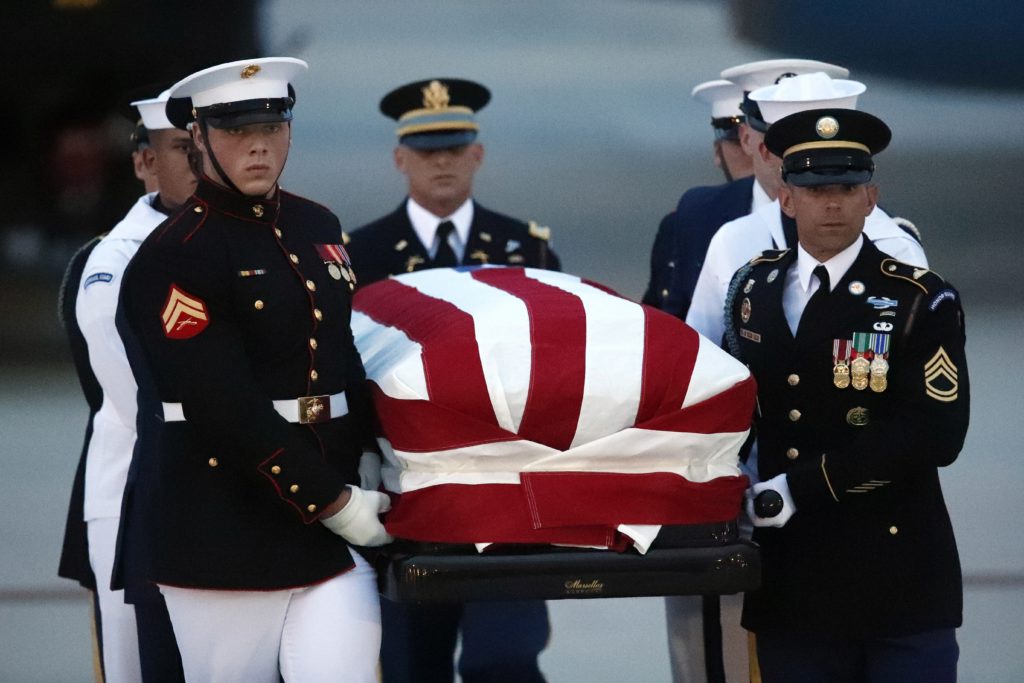 The McCain farewell began Wednesday and Thursday in Arizona, where he and Cindy McCain raised their family. Former Vice President Joe Biden and others provided a preview of the tributes to come.

Much of the proceedings were lighthearted, noting McCain’s penchant for battle.
Biden advised McCain’s friends and family to remember snapshots of him, such as a glance or a touch. “Or when you saw the pure joy the moment he was about to take the stage on the Senate floor and start a fight. God, he loved it.”
McCain’s longtime chief of staff, Grant Woods, a former Arizona attorney general, drew laughs with a eulogy in which he talked about McCain’s “terribly bad driving” and his sense of humor, which included calling the Leisure World retirement community “Seizure World.” When McCain and Woods arrived at the community to apologize, Woods said, they saw a resident near the entrance making an obscene gesture at them.
The service brought to a close two days of mourning for the U.S. senator and 2008 GOP presidential nominee in his home state.
At the end of the nearly 90-minute ceremony, McCain’s casket was wheeled out of the church to “My Way,” in tribute to a politician known for following his own path.
Trump and his wife, Melania, danced to the same song at the new president’s inauguration in 2017.