Several Fresno County agencies are intervening at an RV park that residents say is run down and uninhabitable.
The situation at Jack’s Bayou Resort outside Mendota is already the subject of state investigations and a lawsuit. The safety of the park is the main issue, especially the sewer system.
Park residents have been battling sewage disposal issues, mainly because the owners of Jack’s Bayou Resort defied state orders and even an injunction from a judge to fix the mess.
After a state inspection called for the park to fix and remove external waste tanks, the park did so in July. However, the owners never replaced the tanks or offered a pumping service for residents remaining on the property to dispose of waste.
The problems caught the attention of the public health department. Along with agents from social services and the sheriff’s office, public health visited residents at the beleaguered park last Friday (Aug. 24).
“Our involvement there was to evaluate the property to determine if there were improper discharges of wastewater onto the ground,” said Fresno County Public Health Director David Pomaville.

Not all residents were happy to see social services involved.
Phyllis Marin, who sued the RV park, left the dilapidated facility after county officials told her to move because of safety issues involving her children. She said that if she did not remove her children from the area, Child Protective Services would do it for her.
The head of Fresno County social services said it didn’t happen like that.


“Certainly we don’t interfere with anybody’s life. It’s not our role unless we absolutely have to.”—Social services director Delfino Neira
Marin is now living in a Fresno motel, wondering how she will keep her family fed. She said the county officials warned her that because of problems with the RV park’s sewer, it was no longer safe for children.
“We sent some staff out, not to investigate, but to see if we can offer services because they weren’t sure if there were unsanitary conditions,” said Fresno County Social Services Director Delfino Neira.
Neira wanted to make sure that residents out there could use emergency housing vouchers. He was concerned for the safety of the children.
If the children remained, Marin said, social services would call CPS. Marin, he said, interpreted that to mean she could lose her children.
Neira wouldn’t confirm or deny Marin’s claims directly because of confidentiality rules regarding child welfare investigations.
“People just assume that since it’s one of our social workers that this is what we’re doing,” Neira said about his department’s CPS side. “That’s the difficulty and why we try to work through community partners in offering services because people normally associate the Department of Social Services with CPS.”
Neira reiterated that his department’s role was to offer help.
“Certainly we don’t interfere with anybody’s life. It’s not our role unless we absolutely have to,” he said. 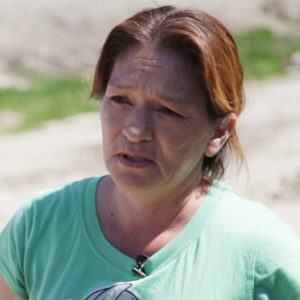 “The situation we’re in, my kids are hungry. I don’t have any money to feed my kids.”—Phyllis Marin
Marin took a county voucher to live in a motel along Olive Avenue in Fresno. She hoped to be closer to Mendota. But locations in Kerman had no vacancies, and other locations would not accept the voucher. She is sharing a room with two beds with her five children.
She drives them back to Mendota for school.
“It’s far to go back and forth. I don’t want them missing school,” Marin said.
Marin, along with her daughter and one other plaintiff, sued the owners of Jack’s Bayou Resort earlier this month. She is accusing the owners of running an uninhabitable facility. A state agency found 161 violations during an inspection last April.
“The situation we’re in, my kids are hungry. I don’t have any money to feed my kids,” Marin said.
Neira said there are other programs that could help people like Marin and her children.
About two or three families accepted vouchers, Neira said.
Others are not as concerned about social services’ involvement.
Robert Escalante, whose wife and children lived at the park, said they moved with him to a relative’s residence in Firebaugh.
He said he wouldn’t characterize social services’ actions as a threat — they just wanted the kids safe. He continues to have strong words for the park owner.
“They should have not taken the sewer tanks out. They put kids in a bigger risk because of that,” he said.

The sewer system is at the center of many of the park’s problems for residents who remain on the south side of the RV park. In addition to HCD finding that the sewer system and its disposal failed to live up to environmental standards, the owner illegally rented those spaces as well.
Residents, who used spaces at Jack’s Bayou Resort to park RVs long term, dumped waste into sewer tanks partially buried in the ground near the vehicles. The park’s owner and manager rarely emptied the tanks, according to Marin and others.
In July, by order of HCD, the park removed the tanks. But the owners failed to put anything in their place, defying both HCD and a judge’s preliminary injunction. That left the few residents who remained on the south side in a quandary.
There are no porta-potties, hand washing facilities or bottled water available, residents say. Those were some of the things the owners were ordered by the state to provide.
On Friday, county public health issued notices to the residents to stop dumping any sewer discharge or gray water (used water from RV plumbing) on the ground.
There is also a north end of the park, closer to a creek, that is considered nicer and subject to fewer complaints and inspections.
However, Escalante, whose family moved out of the park, said that all of those spaces are rented out.

Trump Wakes Up, Googles Himself, Doesn't Like What He Sees