The Wisdom, Wit and Impact of John McCain 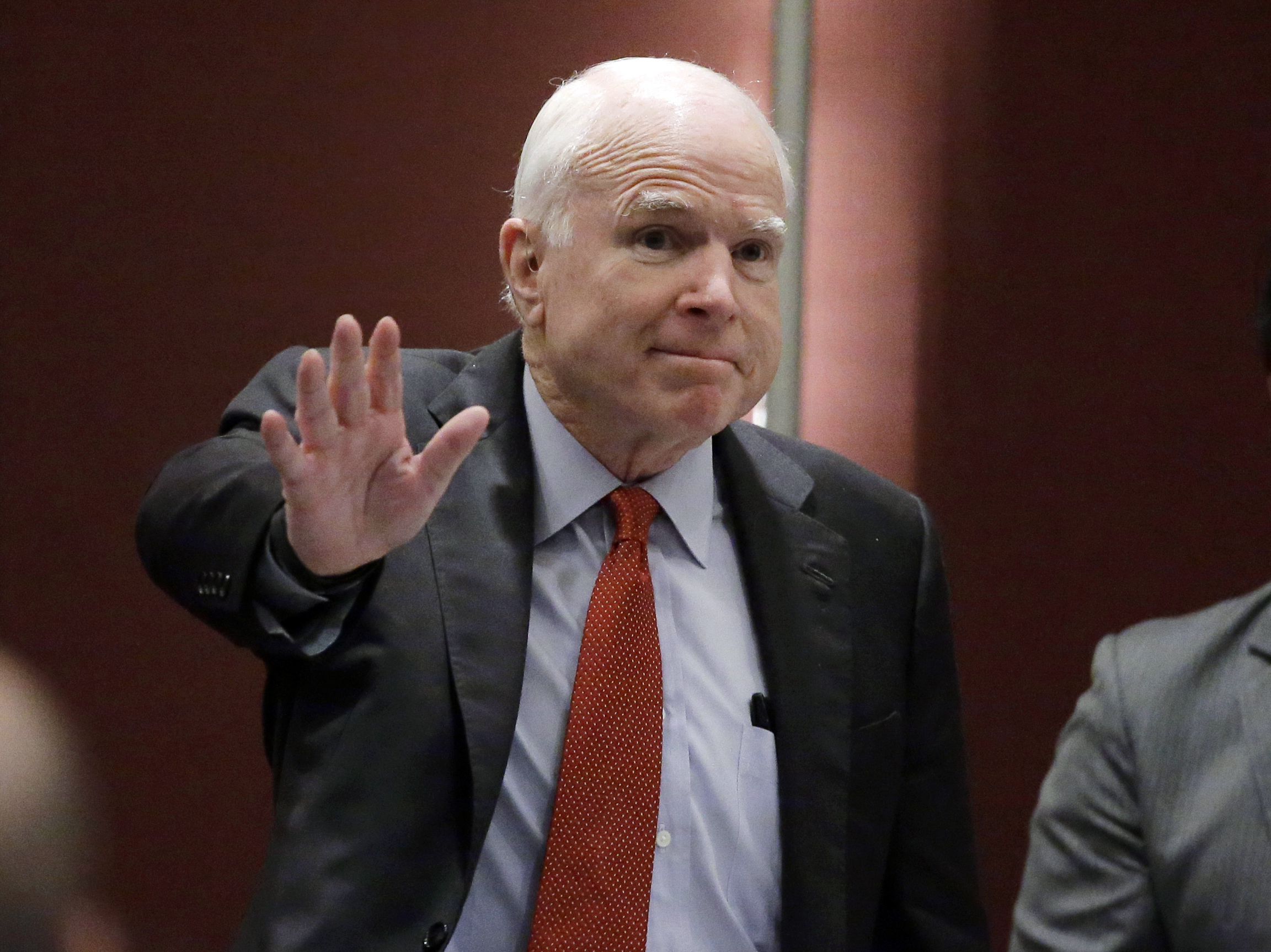 (Click on the video above to view a retrospective of Sen. John McCain’s political life.)
Sen. John McCain wrote the book “The Restless Wave” with friend and speechwriter Mark Salter knowing he might be near the end of his life.
The recently published book ends with McCain paying tribute to America. He writes that the fundamental ideals on which this nation was founded “though they may be assailed, they can never be wrenched.”
And he calls on us to end our political rancor and “recover our sense that we are more alike than different.”
Here are the final six paragraphs of The Restless Wave:
(Editor’s Note: Headlines for each paragraph have been added by GV Wire.)

Americans Need Each Other

“My fellow Americans. No association ever mattered more to me. We’re not always right. We’re impetuous and impatient, and rush into things without knowing what we’re really doing. We argue over little differences endlessly, and exaggerate them into lasting breaches. We can be selfish, and quick sometimes to shift the blame for our mistakes to others. But our country ‘ ’tis of thee.’ What great good we’ve done in the world, so much more good than harm. We served ourselves, of course, but we helped make others free, safe and prosperous because we weren’t threatened by other people’s liberty and success. We need each other. We need friends in the world, and they need us. The bell tolls for us, my friends, Humanity counts on us, and we ought to take measured pride in that. We have not been an island. We were ‘involved in mankind.’

We Are More Alike Than Different

“Before I leave, I’d like to see our politics begin to return to the purposes and practices that distinguish our history from the history of other nations. I would like to see us recover our sense that we are more alike than different. We are citizens of a republic made of shared ideals forged in a new world to replace the tribal enmities that tormented the old one. Even in times of political turmoil such as these, we share that awesome heritage and the responsibility to embrace it. Whether we think each other right or wrong in our views on the issues of the day, we owe each other our respect, as long as our character merits respect, and as long as we share, for all our differences, for all the rancorous debates that enliven and sometimes demean our politics, a mutual devotion to the ideals our nation was conceived to uphold, that all are created equal, and liberty and equal justice are the natural rights of all. Those rights inhabit the human heart, and from there, though they may be assailed, they can never be wrenched. I want to urge Americans, for as long as I can, to remember that this shared devotion to human rights is our truest heritage and our most important loyalty.

I Want to Feel the Sun on My Shoulders

“Then I would like to go back to our valley, and see the creek run after the rain, and here the cottonwoods whisper in the wind. I want to smell the rose-scented breeze and feel the sun on my shoulders. I want to watch the hawks hunt from the sycamore. And then take my leave, bound for a place near my old friend Chuck Larson in the cemetery on the Severn, back where it began.

I Leave Without Complaint

” ‘The world is a fine place and worth the fighting for and I hate very much to leave it,’ spoke my hero, Robert Jordan, in (Ernest Hemingway’s) ‘For Whom the Bell Tolls.’ And I do, too. I hate to leave it. But I don’t have a complaint. Not one. It’s been quite a ride. I’ve known great passions, seen amazing wonders, fought in a war, and helped make a peace. I’ve lived very well and I’ve been deprived of all comforts. I’ve been as lonely as a person can be and I‘ve enjoyed the company of heroes. I’ve suffered the deepest despair and experienced the highest exultation. I made a small place for myself in the story of America and the history of my times.

The Last Strength I Have is Love

“I leave behind a loving wife, who is devoted to protecting the world’s most vulnerable, and seven great kids, who grew up to be fine men and women. I wish I had spent more time in their company. But I know they will go on to make their time count, and be of useful service to their beliefs, and to their fellow human beings. Their love for me and mine for them is the last strength I have.

I Wish Everyone a Life as Lucky as Mine

“What an ingrate I would be to curse the fate that concludes the blessed life I’ve led. I prefer to give thanks for those blessings, and my love to the people who blessed me with theirs. The bell tolls for me. I knew it would. So I tried, as best I could, to stay ‘a part of the main.’ I hope those who mourn my passing, and even those who don’t, will celebrate as I celebrate a happy life lived in imperfect service to a country made of ideals, whose continued service is the hope of the world. And I wish all of you great adventures, good company, and lives as lucky as mine.” 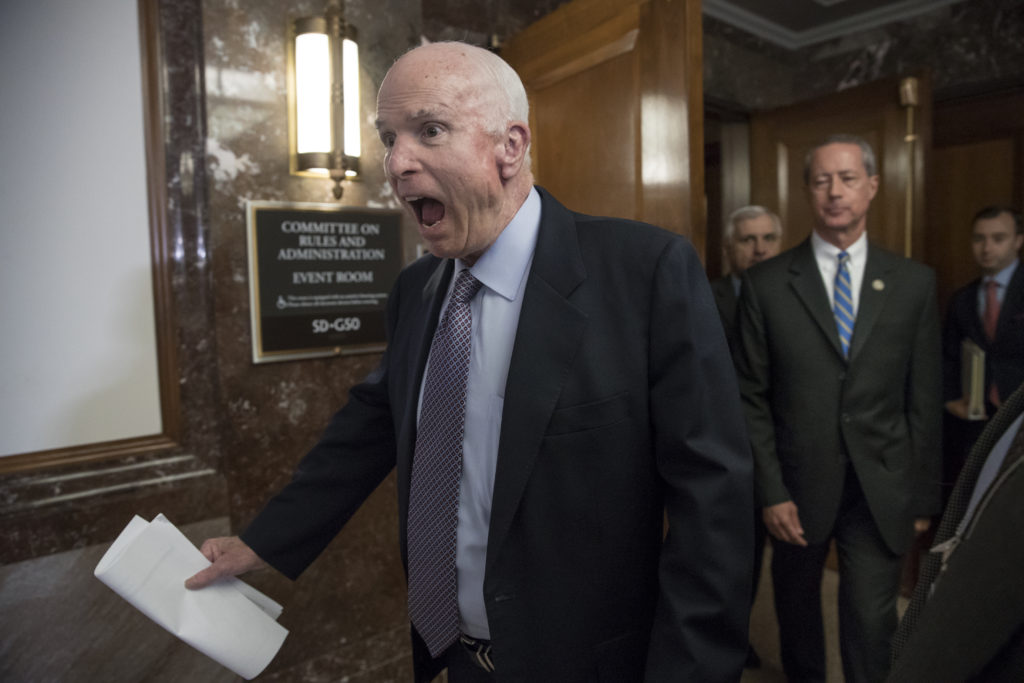 McCain Had a ‘Wicked’ Wit That He Often Aimed at Himself

Here’s how John McCain made it clear he was happy to see you in the Senate hallways.
“Haven’t seen you in a while. How was the Betty Ford clinic?”
Or he’d growl, “Whaddya want?”
Such rascally greetings produced smiles before the discussion or tough questions even had begun. The charm could be disarming, a way of making the sometimes unpleasant hothouse of American government and politics more, well, fun. That was true even among his equally ambitious Senate colleagues, campaign opponents and the reporters who covered him. In fact, Republicans grumbled for years that the McCain fun factor and his maverick streak made him more an ally of reporters than other Republicans.


“You know the difference between a cactus and a caucus? With a cactus, the pricks are on the outside.” — John McCain retelling a joke by his mentor Mo Udall
And yet, the tributes pouring out since McCain’s death on Saturday at 81 were marked by regret over the loss of his particular brand of humor, which was often in borderline taste and frequently at his own expense.
Even straight-faced Majority Leader Mitch McConnell, often vexed over the years by McCain, on Saturday lamented the loss of his “wicked sense of humor.”
No one paying attention would have been surprised at what arrived in the Senate after Arizona’s 1986 election. During the campaign, McCain referred to the retirement community Leisure World as “Seizure World.” Prodded over that, McCain attributed the remark to his “irremediable” tendency to be “a wiseass.”
He won by 20 percentage points.
Inside the Senate, McCain’s humor became a trademark alongside his temper. He writes in his memoir “The Restless Wave” that during his early years in the Senate he had a shouting match away from the microphones with Sen. Ted Kennedy of Massachusetts. The exchange, he wrote, featured abundant cursing and was overheard by reporters in the gallery above. Then, he recalled, he and Kennedy became buddies.
Outside the Senate, McCain often aimed his humor at himself. And he frequently delivered it with a wink.
“Thanks for the question, you little jerk,” he said in 2007 to a New Hampshire high school student wondering if McCain, then 71, was too old to be president.
McCain writes in his memoir that he learned about humor – and other matters – from his mentor Mo Udall, who wrote a book called, “Too Funny to Be President.” McCain wrote that the late Arizona congressman, who ran for president in 1976, was the funniest man he knew.
“You know the difference between a cactus and a caucus?” It was one of Udall’s trademark jokes, which McCain repeated for reporters. “With a cactus, the pricks are on the outside.”
— Associated Press

“McCain (R-Ariz.), who used his chairmanship of the Senate Armed Services Committee to question the president’s stance on issues such as Russia, torture, and immigration, leaves control to Sen. James M. Inhofe (R-Okla.). Senate Foreign Relations Committee Chairman Bob Corker (R-Tenn.), who has been a one-man Greek chorus of epithets decrying Trump’s chaotic approach to diplomacy, will hand the reins to Sen. James E. Risch (R-Idaho) at the start of the new year.

“The departure of either committee chairman would be noteworthy, as both have attracted considerable attention for criticizing the White House for foreign policies they deem flawed. But together, they portend a sweeping change in how Congress may use its oversight authority to check the president’s international agenda, according to current and former lawmakers, lobbyists and policy watchers — a changing of the guard with potentially enormous consequences for holding the president to account during crises.”

You can read the rest of this report at this link.

People in Vietnam are paying their respects to U.S. Sen. John McCain who was held as prisoner of war in Vietnam and later was instrumental in bringing the wartime foes together.
People paid tribute to McCain at the U.S Embassy in Hanoi on Monday and also at the monument built where he parachuted from his Navy Skyhawk dive bomber in October 1967 and was taken prisoner of war. He was held more than five years at the infamous “Hanoi Hilton” prison. 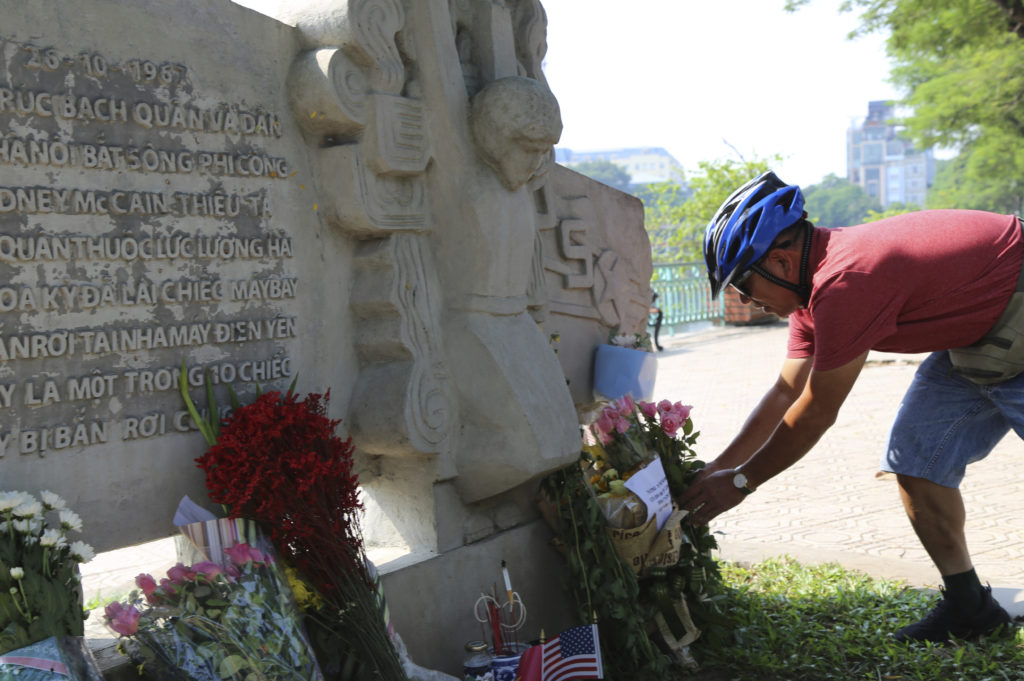 Pham Van Khanh, a 62-year-old retiree, lays flowers at the monument of Senator John McCain in Hanoi, Vietnam, Monday, Aug. 27, 2018. The monument was erected by Vietnamese authority to mark the day when McCain’s plane, a Major in the U.S. Navy was shot down in 1967. Vietnam has been paying respect to McCain who died on Saturday. (AP Photo/Tran Van Minh)

McCain and former Sen. John Kerry played an important role in the bilateral normalization of relations in 1995.
McCain’s Vietnamese jailer said he respected his former inmate and felt sad about his death.
Former Col. Tran Trong Duyet, who ran the prison at the time, said he met with McCain many times while he was confined there.
“At that time I liked him personally for his toughness and strong stance,” he told the newspaper Vietnam News, published by the official Vietnam News Agency.
“Later on when he became a U.S. senator, he and Sen. John Kerry greatly contributed to promote Vietnam-U.S. relations so I was very fond of him,” Vietnam News quoted Duyet as saying Sunday.
“When I learnt about his death early this morning, I feel very sad. I would like to send condolences to his family. I think it’s the same feeling for all Vietnamese people as he has greatly contributed to the development of Vietnam-U.S. relations,” Duyet was quoted as saying.
— Associated Press