Interior Secretary Ryan Zinke issued a memo Friday outlining his expectations that federal officials quickly come up with a plan to increase irrigation deliveries to farmers south of the Sacramento-San Joaquin River Delta. 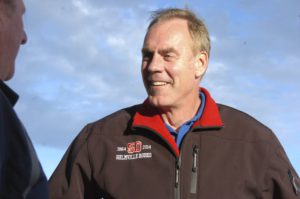 “The time for action is now.” — Interior Secretary Ryan Zinke

“The time for action is now,” Zinke wrote in an Aug. 17 memo that called for action “within 15 days.”

Zinke’s focus is the Central Valley Project, which is operated by the U.S. Bureau of Reclamation.
“Today, the Central Valley Project is in such a desperate state of repair that it cannot effectively achieve its design capacity operations without the assistance of California’s own State Water Project to move water,” Zinke said. “Beyond neglecting our infrastructure, actions taken by the various agencies have significantly reduced the water available for delivery south” of the delta, Zinke said.
Zinke also referenced state plans that would require dams in the Sierra to release 40 percent of flows in the Tuolumne, Stanislaus, and Merced rivers from February through June. The state’s goal is to enable more young salmon to reach the Pacific Ocean.
“Our operational needs and our environmental regulations must innovate, incorporate best science, implement best practices, and produce greater reliability and better stewardship.”

Frances Mizuno, interim executive director of the San Luis & Delta-Mendota Water Authority, cheered Zinke’s directive.
“We are extremely pleased with the Secretary’s order and look forward to providing any assistance necessary to help carry out his objectives,” Mizuno said.
“This gives CVP water users hope that there will be a more balanced approach to water supply adequacy and reliability that is sorely needed on our farms and in our rural communities, in the Santa Clara Valley high tech industry, and on wildlife refuges.”

On June 15, the Bureau of Reclamation announced that south-of-the-delta agricultural water service contractors would see their allotments increase from 45 percent to 50 percent of their contract amounts. The allocation for municipal and industrial contractors this year is the greater of 75 percent of their historic use or public health and safety needs.

Pope on Sex Abuse: 'We Showed No Care for the Little Ones'