Fresno Bee to Trump: We're Not Enemies of the People 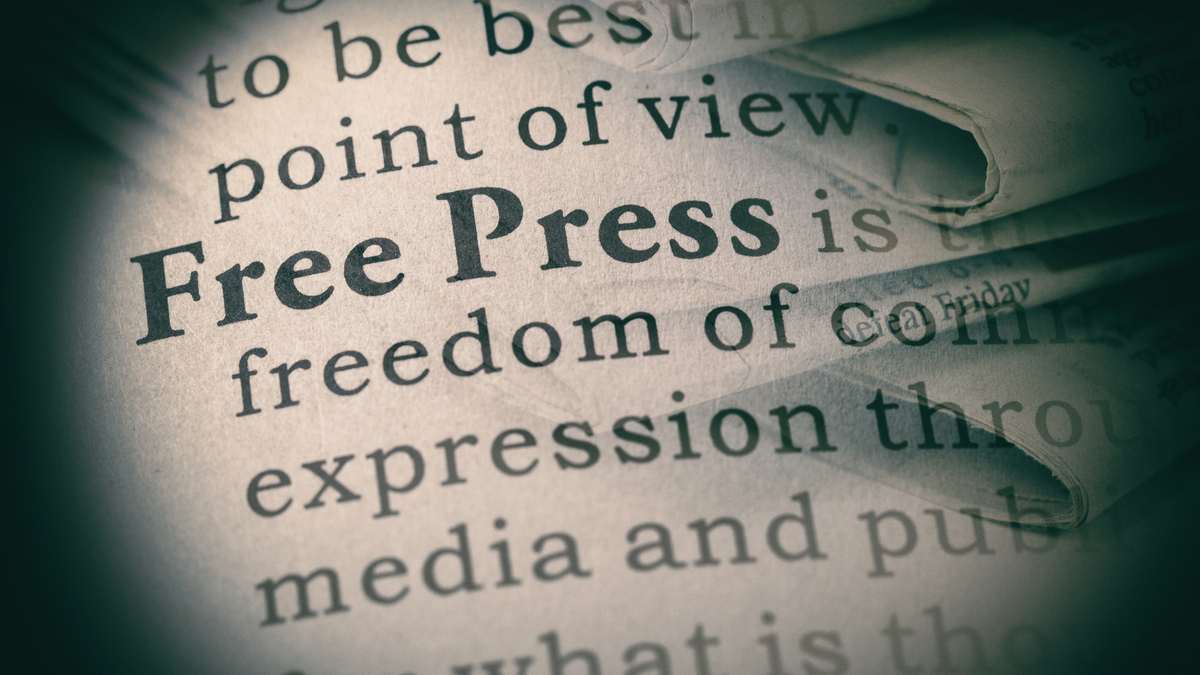 Newspapers from Maine to Hawaii, including The Fresno Bee, pushed back against President Donald Trump’s attacks on “fake news” Thursday with a coordinated series of editorials speaking up for a free and vigorous press.
The Boston Globe, which set the campaign in motion by urging the unified voice, had estimated that some 350 newspapers would participate.


Some newspapers, including the Wall Street Journal and the San Francisco Chronicle, wrote editorials explaining why they weren’t joining the Globe’s effort.
“We don’t expect President Trump to like us, agree with us, or even click our website or buy a newspaper. But to call us an enemy of the American people is beyond reasonable bounds,” wrote The Bee Editorial Board.
“Bee reporters work hard to get information, often from sources who are reluctant to provide it, even when the information was gathered by a taxpayer-supported agency and is clearly in the public’s right to know.
“Opposition to a free press is nothing new, nor is President Trump the first Oval Office occupant to dislike the media. Like their colleagues elsewhere, The Bee’s journalists understand it is part of the job. They don’t ask for sympathy or favor.
“We join our colleagues across the country today with this call: President Trump, please stop referring to the press as ‘the enemy.’ Disagree with us; call us slow-witted if we make an error. But don’t make us less than the Americans we truly are.”
You can read The Bee’s entire editorial at this link.

What Other Newspapers Are Saying

The Portland (Maine) Press-Herald said a free and independent press is the best defense against tyranny, while the Honolulu Star-Advertiser emphasized democracy’s need for a free press.
“The true enemies of the people — and democracy — are those who try to suffocate truth by vilifying and demonizing the messenger,” wrote the Des Moines Register in Iowa.
In St. Louis, the Post-Dispatch called journalists “the truest of patriots.” The Chicago Sun-Times said it believed most Americans know that Trump is talking nonsense.
The Fayetteville Observer said it hoped Trump would stop, “but we’re not holding our breath.”
“Rather, we hope all the president’s supporters will recognize what he’s doing — manipulating reality to get what he wants,” the North Carolina newspaper said.
On Thursday morning, Trump again took to Twitter to denounce  “collusion” by the free press and “fake news.”

The Boston Globe, which was sold to the the Failing New York Times for 1.3 BILLION DOLLARS (plus 800 million dollars in losses & investment), or 2.1 BILLION DOLLARS, was then sold by the Times for 1 DOLLAR. Now the Globe is in COLLUSION with other papers on free press. PROVE IT!

That followed this tweet from the president: “THE FAKE NEWS MEDIA IS THE OPPOSITION PARTY. It is very bad for our Great Country….BUT WE ARE WINNING!”
The Morning News of Savannah, Georgia, said it was a confidant, not an enemy, to the people.
“Like any true friend, we don’t always tell you want you want to hear,” the Morning News said. “Our news team presents the happenings and issues in this community through the lens of objectivity. And like any true friend, we refuse to mislead you. Our reporters and editors strive for fairness.”
Some newspapers used history lessons to state their case. The Elizabethtown Advocate in Pennsylvania, for instance, compared free press in the United States to such rights promised but not delivered in the former Soviet Union.

In a rebuke to Trump, the U.S. Senate went on record Thursday, declaring “that the press is not the enemy of the people,” rollcall.com reported.
Senators adopted by unanimous consent a resolution from Democratic Sen. Brian Schatz of Hawaii and Minority Leader Charles E. Schumer of New York to declare the Senate’s support for a free press and the First Amendment protections afforded to journalists. 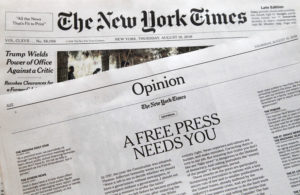 An editorial titled “A Free Press Needs You” is published in The New York Times, Thursday, Aug. 16, 2018.  (AP Photo/Mark Lennihan)

“Donald Trump is not responsible for the eroding trust in the media. He lacks the credibility to pull that off. The damage to our standing is self-inflicted.” — Nolan Finley, columnist and editorial page editor of The Detroit News
That last sentiment made some journalists skittish.
Some newspapers, including the Wall Street Journal and the San Francisco Chronicle, wrote editorials explaining why they weren’t joining the Globe’s effort.
The Chronicle wrote that one of its most important values is independence, and going along with the crowd went against that. Both the Chronicle and Baltimore Sun said that it plays into the hands of Trump and his supporters who think the media is out to get him.

Too Much Opinion, Not Enough Facts

Nolan Finley, columnist and editorial page editor of The Detroit News, spoke up for the press but added a scolding. He said too many journalists are slipping opinion into their news reports, adding commentary and calling it context.
“Donald Trump is not responsible for the eroding trust in the media,” Finley wrote. “He lacks the credibility to pull that off. The damage to our standing is self-inflicted.”
The Radio Television Digital News Association, which represents more than 1,200 broadcasters and websites, is also asking its members to point out that journalists are friends and neighbors doing important work holding government accountable.
“I want to make sure that it is positive,” said Dan Shelley, the group’s executive director. “We’re shooting ourselves in the foot if we make this about attacking the president or attacking his supporters.”
It remains unclear how much sway the effort will have. Newspaper editorial boards overwhelmingly opposed Trump’s election in 2016. Polls show Republicans have grown more negative toward the news media in recent years: Pew Research Center said 85 percent of Republicans and Republican-leaning independents said in June 2017 that the news media has a negative effect on the country, up from 68 percent in 2010.