With the filing deadline three days away, 28 candidates (including 8 incumbents) have qualified for local school board races being decided in November’s general election.

Among the contests drawing interest is a rare open seat on the Clovis Unified School District board. Area 3 incumbent Jim Van Volkinburg, a dentist and school board member since 1993, has decided not to run for re-election.

Two candidates have filed for the race to take his place. Tiffany Stoker Madsen lists herself as a small businesswoman and mother. She is also a former Miss California and Miss America runner-up in 1996. Financial documents show her raising $13,700 thus far.

Friday (Aug. 10) marks the deadline for candidates to file to run for office in November (there is a five-day extension of the incumbent does not run). Here are the local school board candidates who have filed thus far:

School board races have also attracted three former candidates who were unsuccessful in their primary campaigns for seats on the Fresno City Council.

Kimberly Tapscott-Munson is seeking an open seat on the Fresno County school board. Area 1 incumbent Ismael Herrera is not running for re-election.

Veva Islas, who finished third in the District 7 city council race, is running against incumbent Christopher De La Cerda for the Fresno Unified Area 4 (McLane High School area) seat. Islas finds herself $22,611 in debt from her prior run for office.

Daren Miller, whose District 3 city council race was so close it needed a recount, is running for State Center Community College in District 5.

One other note about Fresno Unified’s board contests: Fresno City Councilman Clint Olivier, who flirted with the idea of running for school board, tells GV Wire he is officially not a candidate.

In Central Unified, two candidates have lined up in opposition to sitting board members. Geologist Jason Paul plans to run against board president Cesar Granda. Although he hasn’t filed yet, Granda says he plans to submit his paperwork this week.

Yesenia Carillo, an attorney, has filed to run against incumbent Ruben Coronado. Another attorney from her law firm, Hatmaker Law Group, is running in Clovis Unified.

The latest round of financial information for candidates shows who has raised what, and how much cash is left in the bank. Here are the numbers through June 30 for city of Fresno candidates:

Fresno Mayor Lee Brand took advantage of a change in city policy which allowed him to start fundraising in an off-year (he is not up for re-election until 2020). Nearly 200 individuals and businesses contributed $393,342 to Brand, giving him a giant head start over any potential competitor who may emerge for mayor.

In the Fresno City Council run-off races, Tate Hill and Miguel Arias are nearly even, both for cash on hand and debt in District 3. Luis Chavez has a considerable advantage over debt-ridden opponent Paula Yang in District 5. In District 7, Brian Whelan has 10 times the cash on hand as opponent Nelson Esparza. 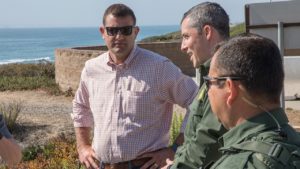 According to a Valadao news release, the Valley congressmen toured the Otay Mesa Detention Center and the San Ysidro Port of Entry.

“The situation at our southern border faces several challenges and overcoming these obstacles requires a multi-faceted approach. There are few things more important than ensuring the safety of children, regardless of which country they hail,” Valadao said in a statement.

“Federal immigration policy has serious consequences for thousands of families especially those here in the Central Valley. It’s critical for (a) member of Congress to have real, firsthand knowledge of the conditions at our border and the situations our Border Patrol agents face each and every day.”