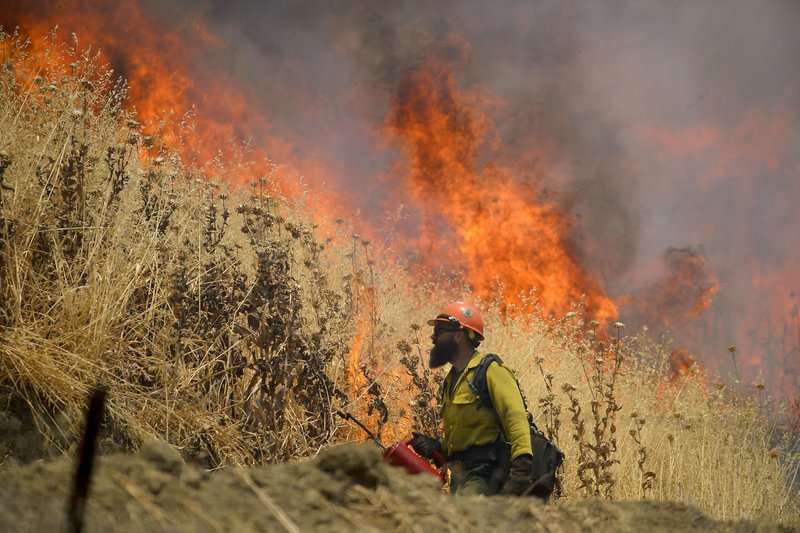 The Latest on wildfires in the Western United States (all times local Thursday, July 5):

Authorities say a fire that jumped across Interstate 5 south of the Oregon border in California has closed the southbound lanes in that area.
The Oregon Department of Transportation said Thursday evening the southbound lanes would remain closed at Ashland, Oregon, with no estimated time for reopening.
The agency suggests motorists traveling toward California take Oregon 58 or 140 to U.S. 97.
The agency says the fire called Klamathon started Thursday afternoon and has forced evacuations in Hornbrook, California.
The California Department of Forestry and Fire Protection said Thursday night that the blaze had burned nearly 8 square miles (20 square kilometers). The department says multiple structures are threatened, damaged or destroyed.
California Gov. Jerry Brown has declared a state of emergency for Siskyou County, citing “extreme peril” to people and property.
___

Authorities say a wildfire in rural Northern California has destroyed nine buildings but there’s no word on whether any homes burned.
State fire officials released an update Thursday night on the fire northwest of the state capitol of Sacramento that is scorching its way through drought-stricken timber and brush.
Firefighters began damage inspections in the fire zone, which covers an area nearly three times the size of San Francisco.
The fire is 33 percent contained but crews are struggling through steep and rugged terrain on the northern end.
Fire officials say the weather is getting hotter and drier heading into the weekend and that means the fire could grow.
___

A Colorado sheriff has told immigrants who were forced from their homes by a wildfire that no federal immigration officers are waiting for them at evacuation shelters.
Eagle County Sheriff James Van Beek offered the assurances Thursday at a community meeting in the town of Basalt.
Van Beek said he was addressing rumors but didn’t elaborate.
The audience applauded loudly. A second round of applause followed when an interpreter translated his comments into Spanish.
More than 500 homes have been evacuated because of a wildfire burning near Basalt in the Colorado mountains. The fire had burned at least 4 square miles (nearly 10 square kilometers).
___

State officials say a Utah wildfire near a popular fishing reservoir has burned an estimated 90 structures and forced the evacuations of about 1,100 people.
The new figures from the Utah Department of Emergency Management on Thursday show the impact of the fire that has burned 66 square miles (171 square kilometers).
The structures likely include homes and cabins, while others may be sheds or garages.
The agency’s daily report says a total of 1,000 homes are threatened by the fire that started Sunday near Strawberry Reservoir, about 80 miles (130 kilometers) southeast of Salt Lake City.
High winds, heat and dry conditions are fueling the fire that has also led to a closure of a 35-mile stretch U.S. Highway 40.
The fire is 4 percent contained.
The agency believes people started it, but an exact cause hasn’t been determined.
More than 60 blazes are burning across the Western U.S.
___

A tornado has touched down at the edge of a high-elevation wildfire in Colorado, a doubly rare event that apparently caused no damage and had little effect on the fire.
The National Weather Service says the twister touched down at about 1:30 p.m. Thursday in Park County south of Fairplay, a central Colorado town about 10,000 feet (3,000 meters) above sea level.
National Weather Service meteorologist Russell Danielson says the tornado appeared to be near or on the edge of a wildfire that has burned about 17 square miles (43 square kilometers).
Danielson says tornadoes are rare at that elevation and rare at any wildfire.
He says no damage has been reported and the tornado appeared to have little or no effect on the wildfire. The area is sparsely populated.
Danielson says it’s only the sixth tornado recorded in Park County since record-keeping began in the 1950s.
___

Rain is in the forecast over parts of Colorado, promising some relief for firefighters but threatening to trigger flash floods on erosion-prone hillsides where trees and bushes have burned up.
Mark Wankowski, a meteorologist for the National Weather Service in Pueblo, says even a little rain can cause flooding on a burn scar.
A flash flood watch was in effect Thursday for a swath of Colorado just east of the mountains. Forecasters say rain is also expected in southwestern Colorado.
Forecasters differ on whether this is the start of the annual monsoon that brings rain to parts of the Southwest every summer, or if that will come later. But they say the wet weather could last through the weekend.
Dennis Phillips, a Weather Service meteorologist in Grand Junction, says the storms will be widespread so a broad area could get rain.
___

The Air Force is sending two more tanker planes to help fight massive wildfires burning in Colorado.
The military said Thursday the specially equipped C-130s will fly missions out of Peterson Air Force Base in Colorado Springs. They will join two other C-130s that started firefighting work on Monday.
A modular system of pumps and tanks is loaded into the planes’ cargo bay, allowing them to dump 3,000 gallons of water or fire retardant in 5 seconds.
The newly enlisted planes are from the Wyoming Air National Guard in Cheyenne and the Nevada Air National Guard in Reno. The two planes already on the scene are from an Air Force Reserve unit at Peterson.
More than a half-dozen large fires are burning across Colorado.
___

A northern New Mexico ranch where novelist D.H. Lawrence once sought spiritual renewal has been closed because of a nearby wildfire.
The Carson National Forest imposed restrictions last week that closed the University of New Mexico’s D.H. Lawrence Ranch.
Forest officials said in a statement Wednesday that a fire in the drought-stricken forest has scorched nearly 4 square miles (10 square kilometers) since June 24 and is only partially contained. The blaze is under investigation.
Lawrence and his wife, Frieda, made summer visits to the ranch in 1924 and 1925. After Lawrence’s 1930 death, the ranch still hosted many famous visitors. Among them was Swiss psychiatrist Carl Jung, author Willa Cather and artist Georgia O’Keeffe.
Frieda Lawrence, who died in 1956, left the property to the school in her will.
___

A Colorado wildfire has destroyed three homes after officials say tracer rounds fired at a shooting range supposedly ignited the flames.
Authorities said Thursday that firefighters worked through the night to protect homes near Basalt, about 20 miles (32 kilometers) northwest of Aspen. But they say the homes burned during extreme fire behavior and a shower of embers.
Fires usually calm down as darkness falls, but one neighborhood had to be evacuated in the middle of the night because the fire remained active. Over 500 homes have been evacuated.
Two people have received tickets for using tracer ammunition that illuminates the path of fired bullets.
Another Colorado fire has destroyed more than 100 homes. The half-dozen fires in the state are among dozens burning across the Western U.S.
___

Officials say cooler weather did little to help a massive blaze in Northern California that’s threatening more than 1,400 buildings.
The California Department of Forestry and Fire Protection said Thursday that the wildfire northwest of Sacramento grew overnight to 134 square miles (347 square kilometers).
But Cal Fire says crews gained some ground and got more control over the flames.
Roughly 2,500 people have been forced from their homes since the blaze started Saturday. Officials have lifted some mandatory evacuations, but it’s not known how many people have been allowed to return home.
No structures have been damaged or destroyed.
It’s one of more than 60 blazes are burning across the Western U.S.
___

A growing Utah wildfire near a popular fishing reservoir has forced the closure of a highway.
High winds, heat and very dry conditions are fueling the fire near Strawberry Reservoir, about 80 miles (130 kilometers) southeast of Salt Lake City. Officials say it has burned 66 square miles (171 square kilometers) and destroyed about 30 structures.
The Utah Department of Transportation on Thursday said it has no estimated time for reopening U.S. Highway 40 between Duchesne and Wasatch counties.
Authorities earlier ordered evacuations for a campground and nearby subdivisions.
The Utah Division of Forestry, Fire and State Lands reports the fire is burning largely out of control.
The agency believes people started it, but an exact cause hasn’t been determined.
More than 60 blazes are burning across the Western U.S.
___

Officials say they’ve ordered more people to evacuate a western Colorado wildfire supposedly started by tracer rounds fired at a shooting range.
Authorities told an unknown number of residents of one neighborhood about 20 miles (32 kilometers) northwest of Aspen to flee early Thursday.
About 500 homes in other neighborhoods already were evacuated as the fire grew in erratic winds.
Before the latest evacuations, U.S. officials announced funding to fight the Lake Christine Fire and said it also threatened a large power grid and a primary water source.
Two people got tickets for using tracer ammunition that illuminates the path of fired bullets.
Another wildfire about 205 miles (330 kilometers) southwest of Denver has destroyed more than 100 homes and forced over 2,000 people to evacuate.
More than 60 blazes are burning across the Western U.S.