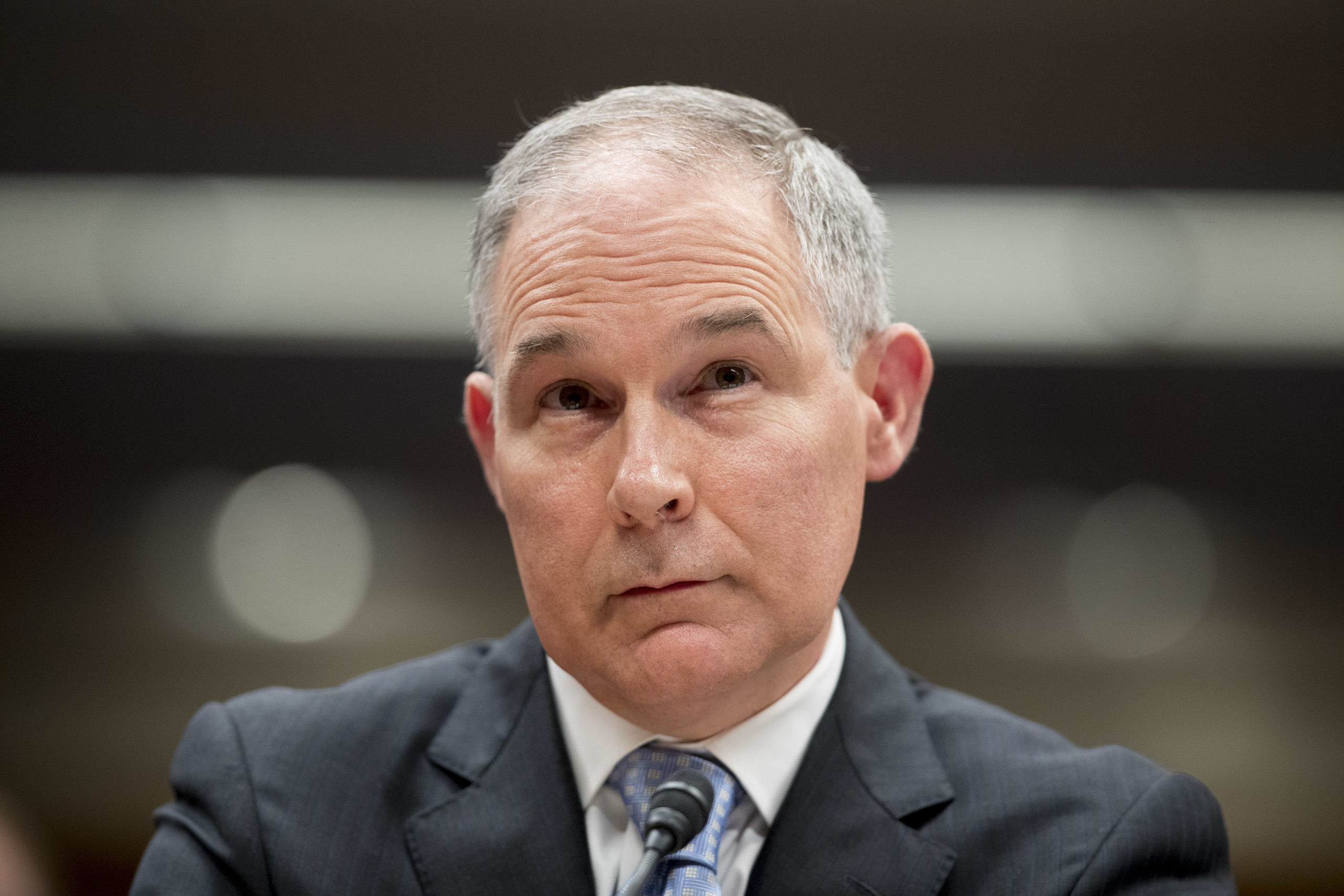 WASHINGTON — Environmental Protection Agency Administrator Scott Pruitt resigned Thursday amid ethics investigations of outsized security spending, first-class flights and a sweetheart condo lease.
With Pruitt’s departure, President Donald Trump loses an administrator many conservatives regarded as one of the more effective members of his cabinet. But Pruitt had also been dogged for months by a seemingly unending string of scandals that spawned more than a dozen federal and congressional investigations.

Pruitt Has No Regrets

In a resignation letter released to media outlets, Pruitt expressed no regret for any actions he had taken since being tapped by Trump to lead EPA last year.
“It is extremely difficult for me to cease serving you in this role first because I count it a blessing to be serving you in any capacity, but also, because of the transformative work that is occurring,” Pruitt wrote. “However, the unrelenting attacks on me personally, my family, are unprecedented and have taken a sizable toll on all of us.”
Pruitt had appeared Wednesday at a White House picnic for Independence Day, wearing a red-checked shirt and loafers with gold trim. Trump gave him and other officials a brief shout-out, offering no sign of any immediate change in his job.

Pruitt: Trump Is President Because of ‘God’s Providence’

Pruitt also wrote in his resignation letter that Trump is president because of “God’s providence,” The Hill reported.

“My desire in service to you has always been to bless you as you make important decision(s) for the American people,” Pruitt said in his letter. “I believe you are serving as President today because of God’s providence. I believe that same providence brought me into your service. I pray as I have served you that I have blessed you and enable you to effectively lead the American people.”

Trump said in a tweet that Deputy Administrator Andrew Wheeler, a former coal industry executive, will assume the acting administrator position Monday.
Pruitt’s resignation came days after two of his former senior staffers spoke to House oversight committee investigators and revealed new, embarrassing details in ethics allegations against Pruitt.
Samantha Dravis, Pruitt’s former policy chief at EPA, told the investigators last week that Pruitt had made clear to her before and after he became EPA administrator that he would like the attorney general’s job, held then and now by Jeff Sessions.
Pruitt “had hinted at that (sic) some sort of conversation had taken place between he and the president,” Dravis told congressional investigators, according to a transcript obtained Thursday by The Associated Press. “That was the position he was originally interested in.”
A former Oklahoma attorney general close to the oil and gas industry, Pruitt had filed more than a dozen lawsuits against the agency he was picked to lead. Arriving in Washington, he worked relentlessly to dismantle Obama-era environmental regulations that aimed to reduce toxic pollution and planet-warming carbon emissions.

During his one-year tenure, Pruitt crisscrossed the country at taxpayer expense to speak with industry groups and hobnob with GOP donors, but he showed little interest in listening to advocates he derided as “the environmental left.” Those groups applauded his departure.
“Despite his brief tenure, Pruitt was the worst EPA chief in history,” said Kieran Suckling, executive director of the Center for Biological Diversity. “His corruption was his downfall, but his pro-polluter policies will have our kids breathing dirtier air long after his many scandals are forgotten.”
Like Trump, Pruitt voiced skepticism about mainstream climate science and was a fierce critic of the Paris climate agreement. The president cheered his EPA chief’s moves to boost fossil fuel production and roll back regulations opposed by corporate interests.
But despite boasts of slashing red tape and promoting job creation, Pruitt had a mixed record of producing real-world results. Many of the EPA regulations Pruitt scraped or delayed had not yet taken effect, and the tens of thousands of lost coal mining jobs the president pledged to bring back never materialized.
Pruitt was forced out following a series of revelations involving pricey trips with first-class airline seats and unusual security spending, including a $43,000 soundproof booth for making private phone calls. He also demanded 24-hour-a-day protection from armed officers, resulting in a swollen 20-member security detail that blew through overtime budgets and racked up expenses of more than $3 million.

Pruitt also had ordered his EPA staff to do personal chores for him, picking up dry cleaning and trying to obtain a used Trump hotel mattress for his apartment. He had also enlisted his staff to contact conservative groups and companies to find a lucrative job for his unemployed wife, including emails seeking a Chick-fil-A franchise from a senior executive at the fast-food chain.
Pruitt’s job had been in jeopardy since the end of March, when ABC News first reported that he leased a Capitol Hill condo last year for just $50 a night. It was co-owned by the wife of a veteran fossil fuels lobbyist whose firm had sought regulatory rollbacks from EPA.
Both Pruitt and the lobbyist, Steven Hart, denied he had conducted any recent business with EPA. But Hart was later forced to admit he had met with Pruitt at EPA headquarters last summer after his firm, Williams & Jensen, revealed he had lobbied the agency on a required federal disclosure form.
Pruitt also publicly denied any knowledge of massive raises awarded to two close aides he had brought with him to EPA from Oklahoma. Documents later showed Pruitt’s chief of staff had signed off on the pay hikes, indicating he had the administrator’s consent.

Pruitt is the latest Trump Cabinet official to lose his job over ethics issues. Veterans Affairs Secretary David Shulkin was fired in March amid questionable travel charges and a growing rebellion in his agency about the privatization of medical care. Health and Human Services Secretary Tom Price was fired last year after it was disclosed he took costly charter flights instead of commercial planes.
“Mr. Pruitt’s brazen abuse of his position for his own personal gain has been absolutely astounding, rivaled only by the silence of far too many in Congress and in the White House who allowed Mr. Pruitt’s unethical, and, at times, possibly illegal behavior to go unchecked,” said Democratic Sen. Tom Carper of Delaware, long a vocal critic of Pruitt’s. “History will not look kindly on this era: neither on Mr. Pruitt’s entirely irresponsible tenure nor on Congress’ abdication of its constitutional responsibilities all in order to protect political allies.”