Passing the state bar is hard. It’s supposed to be. The California bar exam results from February prove it. Of the 5,000-plus hopeful attorneys, only 29% passed. It is the lowest passage rate since the state started keeping records in 1951.

On the surface, the 13% passage rate for San Joaquin College of Law alumni sounds low. And, it is. But consider this: In its category group (accredited schools/not American Bar Association approved), 4 of 31 repeat SJCL test-takers passed, for the 13% rate. That exceeded the category group average of 9%.

The February bar exam typically includes a high percentage of repeat test-takers. Meanwhile, the exam in July attracts a high number of graduates taking the exam for the first time.

The school’s academic dean, Justin Atkinson, said that while passage rates are important, they are not the end-all, be-all.

“SJCL takes very seriously its responsibility to train law students well and give them the skills they need both to pass the California Bar Exam and to practice law effectively. Data about bar pass rates is important in assessing a law school’s performance, but it cannot be a litmus test. The long-term performance of a school is more revealing than a snapshot of one particular sitting of the bar exam,” Atkinson said.

February’s results aside, SJCL-provided stats showing that 77% of alumni have passed the bar exam in the last five years.

“We are concerned that only 13% of repeat takers passed the February 2018 sitting of the bar exam, and will continue to seek improvement in student outcomes,” Atkinson said.

The month-long budget process concluded with the Fresno City Council approving the $1.1 billion spending plan by a 5-2 vote on Thursday (June 28).

How to spend nearly $10 million in newly added funds thanks to a one-time accounting method change led to days of debate. The money came from revenues by adding in a 13th month of the usual 12-month budget period. The council decided to add the money to the city’s reserve.

That meant the original amount that Mayor Lee Brand planned for the reserves $3.4 million, was up for grabs.

Seniors may have been a big winner, with council approving $1 million for a new senior center. Councilman Clint Olivier won support from the council as well to spend $500,000 of the potential cannabis business license tax for an interim center.

The Republican officially asked the chairman of the House Committee on Natural Resources to hold a field hearing in his district to talk about drought.

“I am hopeful that by witnessing the negative impacts of this water crisis, my colleagues on both sides of the aisle will have a greater understanding of just how critical securing a reliable water supply for the region is to my constituents,” Valadao said in a news release.

Meanwhile, Valadao’s GROW Act legislation that passed in July 2017, which would help ease access to water, still languishes in the Senate. The Senate Energy and Natural Resources Committee, chaired by Sen. Lisa Murkowski (R-AK), has yet to schedule a hearing on the bill. 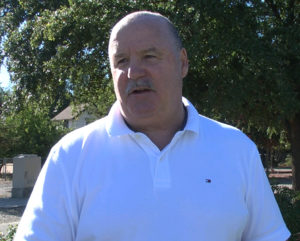 It appears that Clovis City Councilman Drew Bessinger’s job away from the dais is as a full-time interim police chief.

The Merced Sun-Star reported that Bessinger accepted the interim role in Atwater, where the city government has been in turmoil. Police Chief Samuel Joseph was placed on paid leave at the start of the year by a since-departed city manager.

Bessinger, a Fresno State graduate and Army veteran, has held similar interim roles in Fowler, Parlier and Kingsburg following his two-decade career in the Clovis Police Department where he rose to the rank of captain.