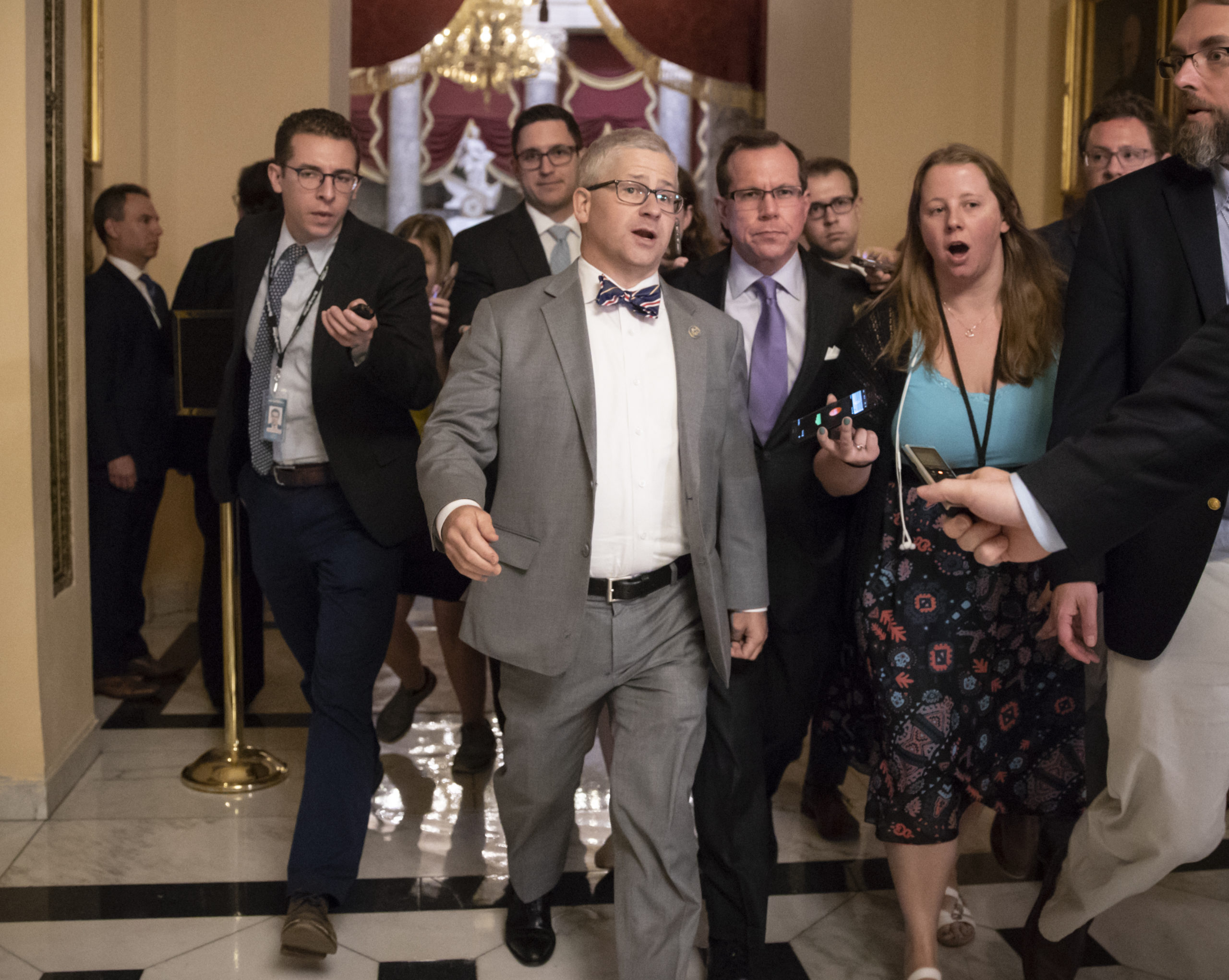 WASHINGTON — President Donald Trump on Friday told his fellow Republicans in Congress to “stop wasting their time” on immigration legislation until after the November elections. GOP leaders said they’d press on anyway, but his comments further damaged their attempt to win over wavering lawmakers for a measure already facing likely defeat.
A little more than four months before the congressional elections, Trump also took a new shot at Democratic lawmakers, accusing them of spreading “phony stories of sadness and grief” about young immigrants separated from parents by his “zero tolerance” policy on illegal border crossings.
Trump’s tweet on immigration legislation was the latest example of his abrupt reversals on issues, to the dismay of Republicans who crave his backing as a seal of approval for conservative voters. Just Tuesday, he met privately with GOP lawmakers and told them he supported the immigration legislation and would have their backs in November.

Republicans should stop wasting their time on Immigration until after we elect more Senators and Congressmen/women in November. Dems are just playing games, have no intention of doing anything to solves this decades old problem. We can pass great legislation after the Red Wave!

Trump’s history of turnabouts has made it harder for congressional leaders to win over other lawmakers for the immigration bill. The measure would grant young “Dreamer” immigrants who arrived in the U.S. illegally as children a chance for citizenship — a move many Republicans worry would enrage conservative voters who’d view it as amnesty.
“You just fear that tweet in the morning,” said Rep. Ileana Ros-Lehtinen, R-Fla., a supporter of efforts to help Dreamers. She said members think, “The day’s not over. Heck, it’s not even noon yet. How many times could he change his mind?”

Despite Trump’s stance, House Majority Leader Kevin McCarthy said the chamber would press ahead on legislation next week. Differences between conservative and moderate Republicans delayed a vote initially planned for Thursday.
The bill would also require the government to separate fewer migrant children from parents when they are detained and finance Trump’s proposed wall with Mexico.
“I think it’s important that the House be able to show we can take the action,” said McCarthy, R-Calif.
“We’re not giving up,” said No. 3 House GOP leader Steve Scalise, R-La.
House Judiciary Committee Chairman Bob Goodlatte, R-Va., said he “absolutely” would continue the immigration push.
“I don’t think it will affect the mood of members who got very close yesterday and want to continue,” he said.
In a private meeting late Thursday, party leaders said they would add provisions to the bill in hopes of rounding up the support they need.

Trump’s comments come amid an international outcry over the separation of migrant families at the southern border. Trump asserted Thursday that Congress could provide the “only real solution” to the crisis.
The last-ditch effort on immigration ahead of the midterm elections was meant to help vulnerable Republicans this fall.
A measure backed by conservative lawmakers failed Thursday. Hours later Republican leaders postponed final voting on what was billed as a compromise immigration package until next week as negotiators made a last-ditch push for support.
Lawmakers said two new provisions would be added to the bill in hopes of winning votes. One would require employers to use an online system to verify the citizenship of their workers, which could attract conservatives.
The other would make it easier for employers to retain migrant workers, which could bolster support from Republicans from agricultural regions. Legislation on those issues had been promised for July, but skeptical lawmakers wanted it sooner.

Senate Will Have To Pass Bill, Too

Calling Democrats “obstructionists” and accusing them of not caring about border security, Trump tweeted Friday that voters need to elect more Republicans.
“Even if we get 100% Republican votes in the Senate, we need 10 Democrat votes to get a much needed Immigration Bill,” he said.
Despite the president’s prediction of a “Red wave” this fall, Republicans are facing an uphill battle this November as they seek to hold control of the House and Senate. Headwinds from the controversy-embracing president and a wave of retirements in the House have put the GOP majority at risk there.
Democrats face a more challenging map to retaking control in the Senate, with the GOP eyeing pick-ups of seats in states Trump carried in 2016.