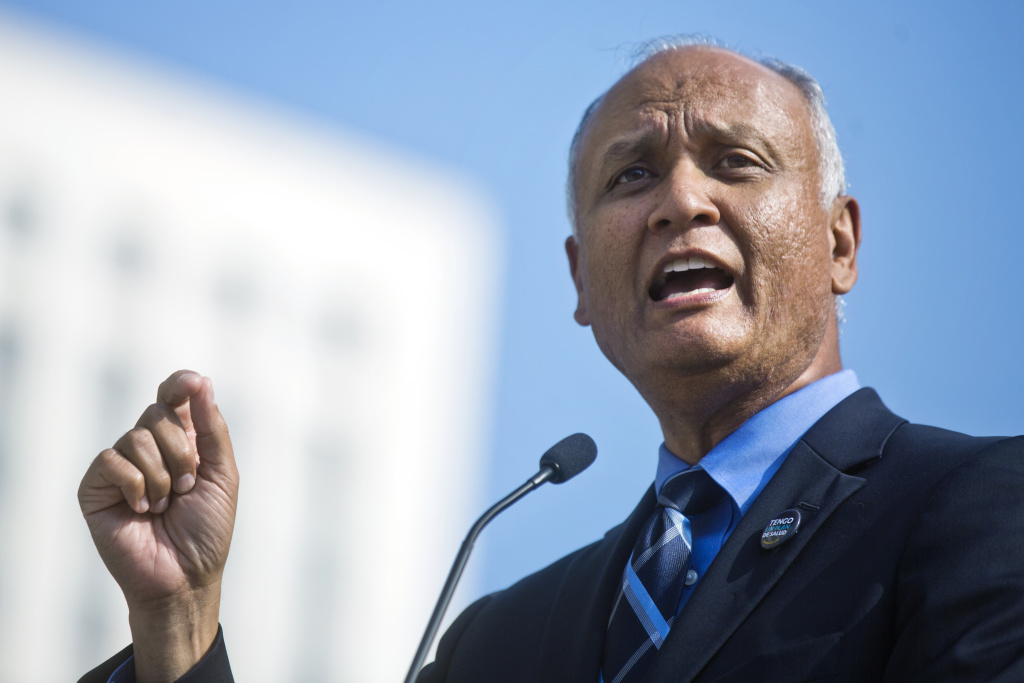 Associated Press
SACRAMENTO  — California Lt. Gov. Gavin Newsom once joked his job doesn’t involve much governing, but that’s not stopping candidates from shelling out millions of dollars to replace him.

About $10 million has been spent on the race, including nearly $5 million from an independent group funded primarily by one of the candidates’ fathers.
Democrats Eleni Kounalakis, Ed Hernandez and Jeff Bleich lead the pack in raising money heading into the June 5 primary. As of mid-April, the most recent deadline to report spending, their campaigns had spent a combined $3.7 million. Four Republicans are also vying for the job.
Cole Harris won the California Republican Party’s endorsement and has spent about $1.9 million, funded almost entirely by his personal wealth. One other Democrat, two candidates without party affiliation and a libertarian are also on the ballot.
Independent expenditure groups are barred from coordinating with campaigns on messaging. Kounalakis, whose father financed the independent expenditure effort to support her, said her campaign is following the laws.
The California Medical Association is running the group, which is funding television ads.”This is all transparent and, in our current system, this is how campaigns are being funded,” said Kounalakis, a former U.S. ambassador to Hungary under President Barack Obama.
But one ethics expert said it reveals problems in the system.”If it’s her father, do we really believe that they didn’t talk about messaging?” said Jessica Levinson, a Loyola Law School professor, although she said it doesn’t appear Kounalakis has violated ethics rules.

The job has always attracted ambitious candidates even though its duties are few. Newsom announced plans to run in 2018 for governor almost immediately after winning re-election as lieutenant governor four years ago. He is the odds-on favorite to win on June 5.
The state’s No. 2 executive is in charge when the governor is away and can use the post to boost his or her name recognition for future statewide campaigns — as Newsom did. The lieutenant governor also casts tie-breaking votes in the state Senate and serves as a University of California regent, a California State University trustee and a state lands commissioner.
“It’s unusual to have so many candidates spending so much money, but Gavin Newsom is kind of the example of what could happen for those who win the position,” said Jaime Regalado, a political science professor emeritus at California State University, Los Angeles. “It can readily serve as a jumping off point for higher office.”
The top fundraisers insist they want the job because they think the lieutenant governor can have a significant impact on higher education and land management issues in California, not because they see the job as simply a stepping stone to higher office.
“It’s a sad statement that becoming the second-highest official in the fifth-largest economy in the world is considered a step down by some people,” said Bleich, a former U.S. ambassador to Australia under Obama and a California State University trustee.
Bleich and his fellow Democratic front-runners mostly agree on policy issues. All three oppose oil drilling off the California coast and want to lower college costs. Each proposes using the post as a megaphone to advocate for issues outside their official duties. Bleich, for example, said he’d expand technical education in California.
He’s raised $2 million, the smallest haul of the three leading Democrats.

Kounalakis would be the first woman to hold the position. She has emphasized her experience as a housing developer and says she would use the post to advocate for women’s issues.
She has raised $4.5 million, the most of all the candidates, including $2.5 million of her own money.
Hernandez, a state senator and optometrist, has raised nearly $2.8 million. He’s been criticized for accepting money from oil and pharmaceutical companies. Last year, he authored a drug pricing transparency bill opposed by the pharmaceutical industry, which he said proves he’s not beholden to donors.
“Everything I do is what’s in the best interest of my constituents and the state of California,” he said. “I do not have a rich father who’s going to be able to do an independent expenditure on my behalf.”
The top two vote-getters in the primary, regardless of party, will advance to the general election.
Money will be critical in the race because none of the candidates are well-known, said Wesley Hussey, a political science professor at California State University, Sacramento. Some of the candidates have started airing television ads to boost their profile.
“It wouldn’t surprise me if the candidate who has the most time on TV is in the first place out of the primary,” Hussey said.