Here's Why Teachers Across America Are Striking 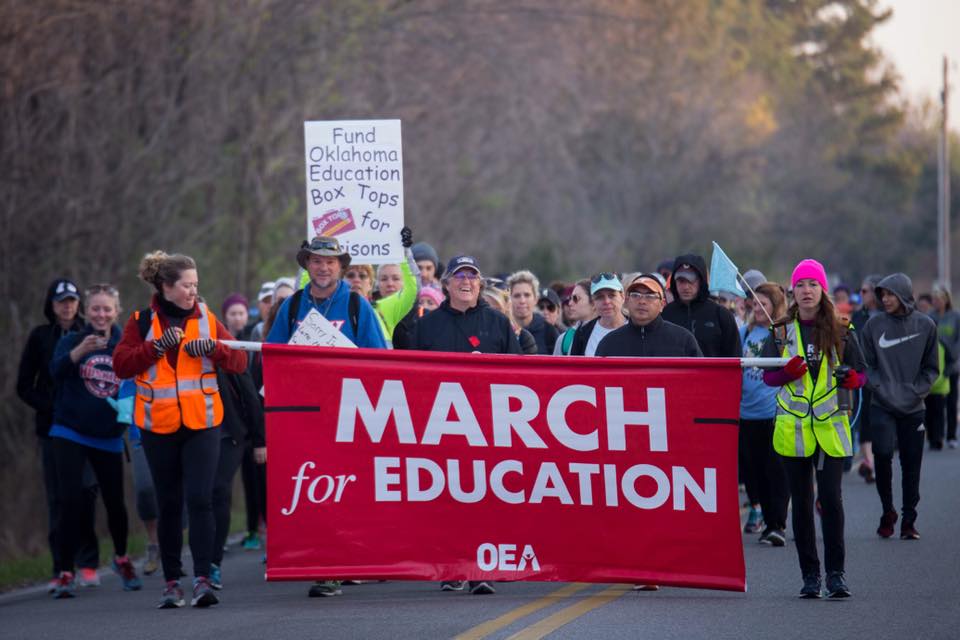 Teachers from Arizona and Colorado are joining teachers in Oklahoma and Kentucky on the picket line.

These teacher strikes will likely intensify the debate among elected officials over where education fits in state budget priorities. They may also prompt Americans to consider whether they are willing to pay more tax dollars to educate the country’s youth. As a scholar who studies protest and politics in the U.S., I’m often asked why teachers are striking now.

These are the three main reasons:

Teachers are rebelling against aging facilities, outdated teaching materials and four-day weeks – all of which are a result of reduced amounts of state and federal money flowing into public schools. In particular, funding greatly varies by school district and is often thinly spread in many states.

In places like West Virginia and Oklahoma, where teachers are pushing back against a poorly funded education system, most of the school districts fall anywhere from 10 to 33 percent below the national average.

Experts agree that public education has fallen on hard times in the last decade. The liberal Center on Budget and Policy Priorities notes that most schools in the U.S. took a hit after the Great Recession in 2008, and that, in 2015, 29 states in the U.S. were still spending less per student than they did in 2008.

This, in turn, meant Florida schools found it more difficult to cover the costs associated with hiring teachers and support staff, as well as paying for educational materials and building upkeep. In short, less money goes to public schools in states where charter schools proliferate. The strikes are the teachers’ way of saying they have had enough.

Some reporters have been quick to attribute teacher protests to #TheResistance – a movement against President Donald Trump.

This assumption ignores the fact that collective action in the U.S. has been on the rise over the last few decades. Americans have grown more accustomed to organizing and taking their claims directly to politicians, and when necessary, to the streets. Between 1960 and 1985, for example, the average size of protests in the U.S. increased dramatically. Making one’s voice heard is simply a part of everyday life in the digital age.

And it’s not just liberals who use public protest as a way to achieve political goals. Protesters span the political spectrum. Remember the Tea Party’s dramatic protests outside the White House and the “sister” tea parties staged outside of state houses across the country?

This is also made clear in the fact that teachers’ political beliefs span the political spectrum. A 2017 survey commissioned by the Education Week Research Center found that K-12 teachers hold a wide array of political points of view. What they share is a passion for their profession and willingness to face down politicians over the future of public education.

Protesting, in short, isn’t only about Donald Trump. It’s an American pursuit – one made easier by new technology, social media in particular.

The man who spearheaded the Oklahoma teacher strike, Alberto Morejon, created a Facebook group after watching teachers protest in West Virginia. The group swelled to 30,000 members in three days. That is nearly three-quarters of all teachers in the state.

Finally, successful tactics spread. This was true of the lunch counter civil rights protests in the 1960s and the Occupy protests that drew attention to local issues such as homelessness in communities across the country in 2011. The same is true today. When an aggrieved group finds a tactic that seems to work, even in the short term, it can quickly spread across the country.

In the case of the teacher strikes, timing is everything. States currently are finalizing their budgets for next year, which means right now teachers have the most opportunity for influence and potentially the loudest voice.

It doesn’t hurt that school is in session, which helps shine a spotlight on the important work that teachers do as well as the conditions in which they do it. When teachers strike, schools close and education comes to a grinding halt.

It is difficult to say if teachers will have all of their demands met.

Not all politicians, however, are agreeing to teacher demands. In Colorado, some lawmakers are pushing legislation that would punish striking teachers with jail time.

Public Education Is Important to Americans

Politicians contemplating action against teachers’ demands would be wise to note that teachers seem to have won over the hearts and minds of most Americans.
A recent poll found that the majority of Americans are willing to pay more in taxes in order to put more money into public education.

This suggests that public education is important to the electorate – and there is an election right around the corner.