Not All Get to Hear LA Congressman Lieu's Views 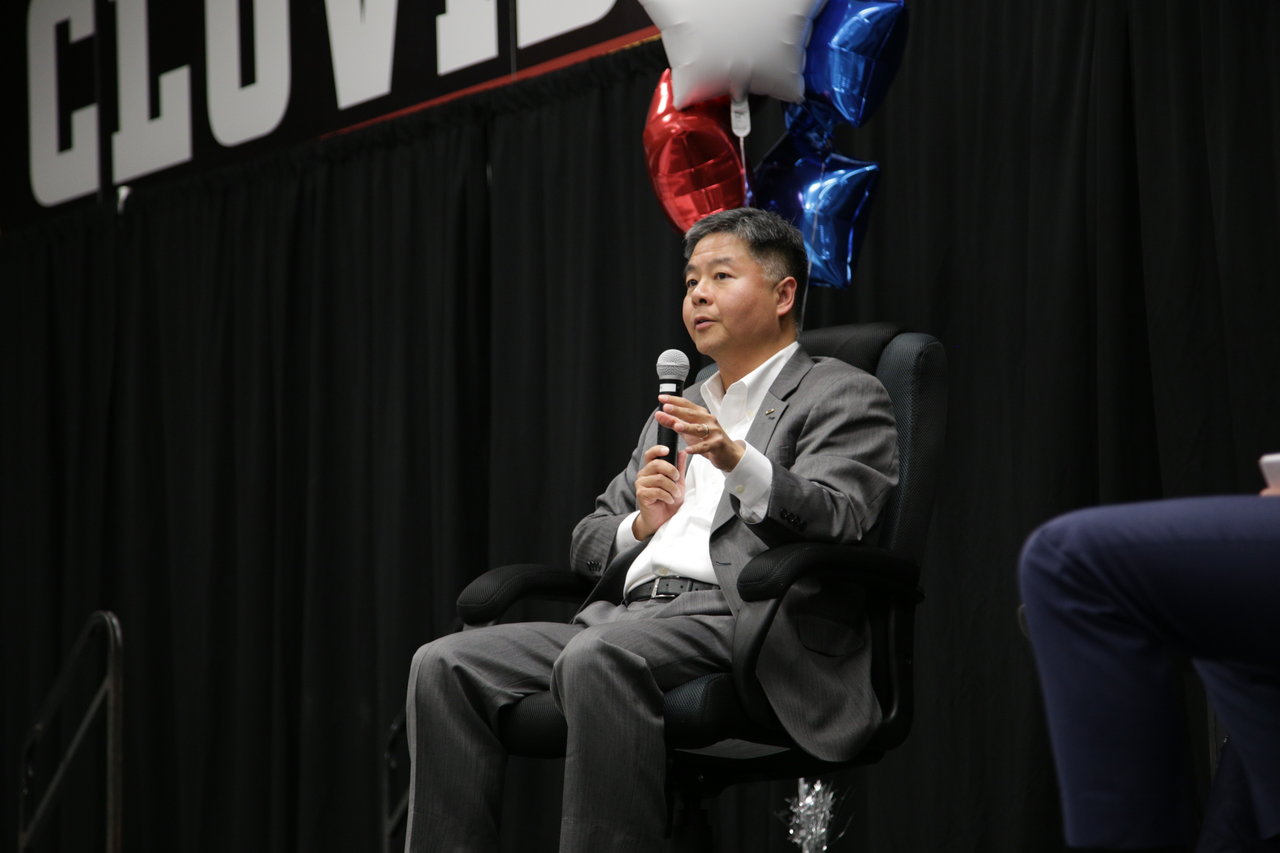 Congressman Ted Lieu (D-Los Angeles) spoke at a Fresno town hall Thursday night (April 5) intended to deliver access to a constituency that can’t speak with their own congressman.

Lieu spoke to a receptive crowd of 175 at Clovis West High School. He talked about immigration and the policies of President Trump.

But not everyone had a chance to attend. Several protesters said they were denied entry because of their pro-Trump views.

The event required tickets (free), and organizers set conditions for attending. Distribution of any literature at the event was forbidden. Disrupters would be asked to leave. Past disrupters would not be allowed in.

“It was a private, invitation-only event. It was intended to be where folks could interact peacefully with Rep. Lieu,” event organizer Nancy Gilmore said. “(Central Valley Indivisible) has every right to invite or preclude who they want to. Some folks tried to attend who weren’t invited.”

One man said he was denied entry, even though he had a ticket. Gilmore said that the group contracted with Clovis Unified for 250 people. The ticketing website should have stopped granting requests Wednesday, she said. So, people with tickets acquired the day of the event were not allowed in.

When GV Wire arrived about halfway through the event, there were plenty of empty seats.

One of the protesters is known conservative provocateur Ben Bergquam. He documented the experience on his Facebook page.

A spokesman for Lieu says he welcomes anyone to hear him speak.

“He is not afraid to have dialogue with those who strenuously disagree with him. We hope people are respectful to allow a free exchange of ideas,” said campaign spokesman Marc Cevasco.

Gilmore explained why in her opinion it was OK to make the event private — even though CVI has criticized Nunes for doing private events while not holding town halls.

“Rep. Nunes is our representative. That is a different thing then inviting a guest congressman to speak to a group of people. Just because it is a town hall, it does not mean it is a public forum,” Gilmore said.

According to the Clovis Unified School District Policy 5301 relating to rentals to outside groups, one of the prohibited uses is, “Any use which is not open to the public or which is not supportive of the multicultural goals of the District.”

District spokeswoman Kelly Avants said, “We don’t see anything in this that would be a violation of our policy or the authorization for ticketed events in the Civic Center Act.”

The Fresno City Council approved Mayor Lee Brand’s incentive plan allowing The Gap to move a fulfillment center to Fresno. The package includes $15,000 back for each new employee hired. Brand estimates The Gap will add 500 jobs.

Esmeralda Soria and Oliver Baines voted no in the 4-2 vote. Each expressed concern about the nature of those jobs, mainly whether they would go to Fresno residents.

After the vote, Ashley Werner, an attorney with the Leadership Counsel for Justice & Accountability, tweeted her frustration that local neighbors weren’t protected.

City of Fresno giveaways to multinational corporations is nothing new. What would be new is outreach to neighbors, local hire standards, and meaningful protections for neighborhoods as required by state law. @LCJandA @FaithInFresno @FresnoBHC  https://t.co/wX5lqtJtbE

Another 26-acre parcel is in the hands of Fresno City College to build its west Fresno satellite campus. The State Center Community College District announced the transaction at a press event Wednesday (April 4).

The district is paying $1.8 million for 13 acres to developers John Shehadey and Sylvesta Hall. In turn, they will donate an adjacent 13 acres, located on Church Avenue, between MLK Boulevard and Walnut Avenue. This land is in addition to 13 acres previously acquired from TFS Investments (developer Terrance Frazier’s company) for $675,000 (in a similar sell half/donate half transaction).

The money comes from the 2016 Measure C bond and cap-and-trade funds.

Board Trustee Miguel Arias told GV Wire that the groups had to get over one hurdle: The developers balked at Fresno City College engaging in commercial activity on the land — from reduced-price oil changes performed by automotive students to a Starbucks on campus. That issue was eventually ironed out, so cheap car maintenance and gourmet coffee will be available to all.

Big Fee Increase for National Parks? It’s Back to the Drawing Board.