Here's Why Trump Will Weather the Stormy Scandal 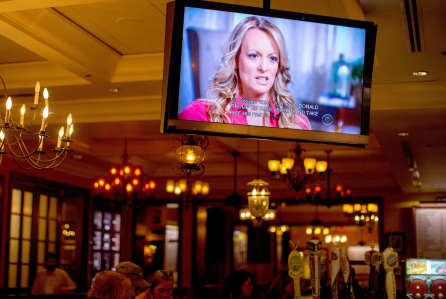 Donald Trump’s opponents have long been waiting for some sort of scandal to bring him down, and they may think they have finally found it in pornographic film star Stormy Daniels.
Daniels alleges she had an extramarital affair with Donald Trump in 2006 and was subsequently paid off by a Trump lawyer to stay silent during the presidential election. These types of charges, if proven true, have felled many politicians in the past.
But Trump’s opponents probably shouldn’t get their hopes up. While political science research has shown that politicians are generally hurt by political scandals like extramarital affairs, the context is key.
A study I conducted with political scientists Doug Schwartz and Sebastian Vallejo explored how scandals can affect a politician’s popularity. We did find that a politician’s image and ability to attract votes can suffer in the wake of an extramarital affair. However, the harm is significantly greater when a politician who has campaigned on morality gets caught having an affair.
In other words, it’s the hypocrisy that matters. Our study found that a scandal can reduce support for a generic candidate, but a scandal accompanied by hypocrisy is where the damage is really done, reducing support by 67 percentage points.
A porn star alleging an affair with a politician and receiving hush money may have seemed inconceivable just a few years ago. But Trump has made it much less remarkable. If anything, it fits with the image many have of him.
Trump was in the public eye long before he entered politics, and allegations of infidelity have dogged him for decades. Long before his presidential run, many Americans knew about his infamous, public divorce battle with his first wife, Ivana Trump, who accused Trump of cheating on her with the woman who would soon be his second wife, Marla Maples. Since then, allegations of extramarital affairs and sexual misconduct have only piled up.

Sixty-five percent of Americans in a recent CNN poll view Stormy Daniels’ charges as definitely or probably true. At the same time, few Americans believe Trump holds the same moral values as they do.
According to a Quinnipiac poll from November 2015, 62 percent of Americans said Trump didn’t share their values, and only 38 percent said Trump was honest. These numbers haven’t shifted during the course of his campaign and presidency. A January 2018 Quinnipiac poll asking the same questions registered pretty much the same responses: 60 percent of adults said he didn’t share their values, while 34 percent said he was honest.
In other words, Trump was elected as a man of questionable moral character, and these judgments persist. At the same time, they inure him – at least partially – from charges of moral hypocrisy.
Our findings on hypocrisy and scandal help explain not only Trump’s continued ability to withstand scandal, but also the downfalls of other politicians.

Other Politicians Pay the Price

An obvious contrast to Trump is Tim Murphy, a vocally pro-life Republican congressman from Pennsylvania who, in late 2017, resigned from office. Not only did news emerge that he had been having an affair, but his girlfriend also revealed that Murphy had pressured her to seek an abortion when she became pregnant.
Reaching back further, in 2008, New York Gov. Elliot Spitzer was drummed out of office for hiring prostitutes. As New York’s attorney general, he had been nicknamed “Mr. Clean,” and was famous for prosecuting and proselytizing about the ills of prostitution.
In each case, the hypocrisy only added fuel to the public and political backlash. If politicians preach morality only to violate it themselves, it can be a career-ender.
While the Daniels affair could easily fell a typical political candidate or officeholder, Trump is no average politician. For his entire adult life, he has been prone to salacious revelations about his personal life.

Trump may be insulated from scandal precisely because he’s always been mired in it.
Monika L. McDermott, Professor of Political Science, Fordham University
This article was originally published on The Conversation. Read the original article.