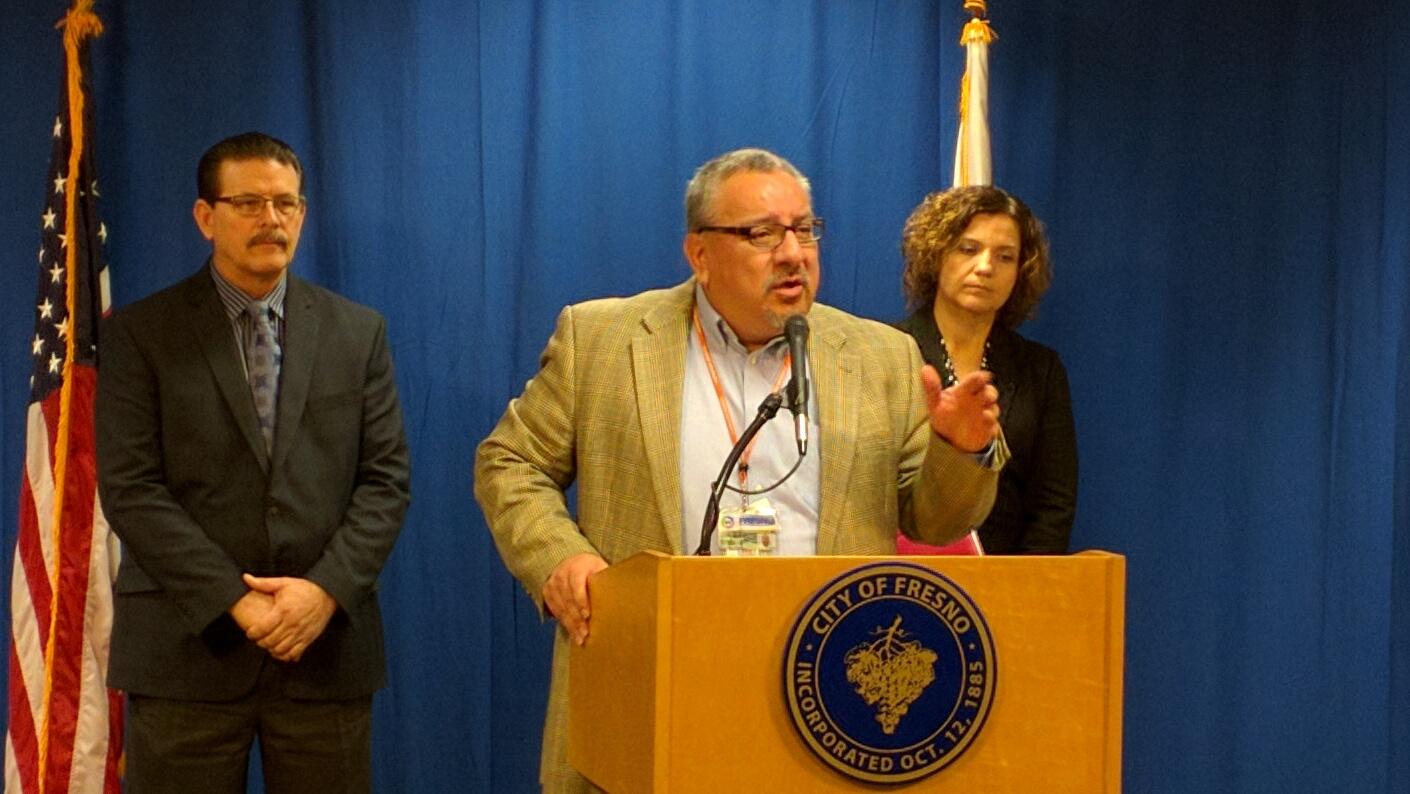 
“A high-energy leader, he is eager to champion our quest to be ‘the Water University.’ ” — Fresno State Provost Lynnette Zelezny
“Thomas Esqueda brings a wealth of water experience in private industries, local and state government and higher education,” Fresno State Provost Lynnette Zelezny said. “A high-energy leader, he is eager to champion our quest to be ‘the Water University.’ ”
Esqueda will become the university’s first associate vice president in Water and Sustainability.
“Fresno State is at the heart of the most important agricultural region in the nation, and is committed to positively addressing water and agricultural issues,” President Joseph I. Castro said. “The challenges that we’re facing in those areas are increasingly formidable, and it is more important than ever that we align our academic resources with the needs of California’s Central Valley.”
Under the general supervision of the provost, Esqueda will lead the University’s efforts in developing, institutionalizing and strengthening water and sustainability programs across the campus and in the community. In addition, he will assist in coordinating established academic, research and outreach activities that address critical agricultural, urban and environmental water and sustainability issues in the Central Valley.
“Throughout my 29-year career, I have worked with communities around the country to solve water challenges, and this opportunity to combine my experience with the commitment and passion of the Fresno State community is an ideal match,” said Esqueda.
UPDATE: 11:15 a.m., Thursday, March 22, 2018:
Tommy Esqueda, the city of Fresno’s Department of Public Utilities director, confirmed to the City Council Thursday morning that he is resigning the position to accept a job at Fresno State.

Multiple sources tell GV Wire that Tommy Esqueda, the city of Fresno’s Department of Public Utilities director, has resigned his post and is headed for a water-related job at Fresno State.
Esqueda was leading the city’s $429 million “Recharge Fresno” effort to upgrade pipelines and water systems. The ultimate goal, according to rechargefresno.com, is to more efficiently “capture, treat and deliver water to Fresno homes and businesses, including surface water from the Sierra Nevada Mountains.”
The Fresno City Council approved Recharge Fresno at the urging of then-Mayor Ashley Swearengin in February 2015. A significant hike in water rates accompanies the upgrades, and thus the council vote generated controversy.

Yet to be completed in the Recharge Fresno plan is a massive $200 million surface water treatment plant in southeast Fresno.
Construction began in spring 2016 and the estimated finish is this September.
When done, the southeast plant’s initial treatment capacity is pegged at 54 million gallons per day. By turning river water into drinking water, the city will become less reliant on well water and hopes to reverse a drop of about 100 feet in the below-ground aquifer.
Sources said that Esqueda informed City Manager Lee Brand of his decision to leave earlier this week.

The Department of Public Utilities became embroiled in a dispute recently over awarding a contract to expand the water capacity at the northeast surface water treatment plant.
City staff initially recommended W.M. Lyles of Fresno for the $11.7 million contract. It also disqualified Mountain Cascade of Livermore as a bidder based on its experience level. After Mountain Cascade protested, the city council delayed a decision on the bid. The council is expected to take up the question again at Thursday’s meeting.
For more on the bid controversy, check out this story by CV Observer’s George Hostetter.

During his Fresno tenure, Esqueda also had to deal with discolored water in northeast Fresno homes.
n 2016, the city said it became aware of the water discoloration. But northeast residents said the problems started in 2004 when the northeast surface water treatment plant went online. Experts said that galvanized pipes had become corroded, causing the discoloration. In spring of last year, City Hall announced that the federal Environmental Protection Agency found that northeast water was safe to drink.

Esqueda, 56, graduated from San Jose State with a degree in civil engineering. He became Fresno’s DPU director June 16, 2014, according to Bloomberg.
“During his 26-year professional career, he has been successful in managing environmental engineering programs and projects for four of the largest consulting firms in the United States,” his Bloomberg profile states. Esqueda also served four years as the Director of Environmental Services for Wake County Government in Raleigh, N.C.
GV Wire sought comment from Esqueda and City Hall spokesperson Mark Standriff on Esqueda’s resignation. Neither got back to us before publication of this story.

March Miracle? Whatever the Rain Total, It's Marvelous

Thumbs Up or Thumbs Down Tonight for Proposed Clovis Charter School?