President Donald Trump’s attacks on the FBI may have reached a climax.

In an apparent attempt to discredit Robert Mueller’s Russia probe, staff of the House Intelligence Committee on behalf of its chair Republican Devin Nunes of California, wrote and on Feb. 2 released a four-page memo based on confidential information made available to them by the FBI. It outlines alleged improprieties in the FBI’s investigation, specifically the monitoring of Trump’s former campaign adviser Carter Page.

Nunes in 2017 was forced to step aside from the committee’s Russia investigation because he was seen as taking direction from the Trump White House.

Page was a foreign policy adviser to the Trump campaign and a person of interest to the FBI beginning in 2013. He became the subject of a Foreign Intelligence Surveillance Act, or FISA, warrant in 2016.

As an FBI historian, I find the congressional effort to discredit the FBI’s investigation startling. Trump’s involvement reminds me of Nixon. Between 1972 and 1973, President Richard Nixon attempted to contain the FBI’s Watergate investigation as it zeroed in on top White House figures.

Congressional Committees and the FBI

The behavior of congressional Republicans in this matter is unprecedented.

This view is shared even by GOP senators John McCain and Jeff Flake. The FBI has a long history, going back to the J. Edgar Hoover era, of providing congressional committees with sensitive FBI information and assistance – provided they keep that information and relationship confidential. 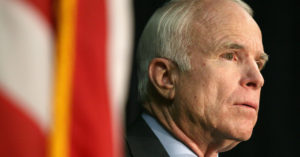 Regarding the Nunes memo: Sen. John McCain, R-Arizona, says that the behavior of Republicans is unprecedented.

For example, the FBI provided information to the House Un-American Activities Committee, singling out suspected communists and anti-communist witnesses – like Ronald Reagan. The FBI cooperated with the Senate Internal Security Subcommittee between 1951 and 1954. And it even provided Sen. Joe McCarthy with information and advice to keep his anti-communist cause alive until he violated Hoover’s rules in 1953 by revealing his relationship with the FBI.

In the years after Hoover, the FBI behaved more properly in sharing sensitive information with Congress. It began restricting itself to sharing information with its congressional oversight committees to keep them abreast of FBI activity and in line with the Justice Department’s investigative guidelines.

In the current Congress, Nunes’ House Intelligence Committee was provided with sensitive FBI information about its Russia probe based on the understanding that the committee would not publicly reveal any of it without first asking the FBI to advise and redact classified information.

The committee didn’t wait for redactions, however, and instead chose to reveal select nuggets of the FBI’s intelligence in its four-page memo. Trump-nominated FBI Director Christopher Wray publicly spoke out against Trump’s wishes about releasing the memo after he failed to convince the White House to block it. Wray is concerned the Nunes memo contains “material omissions of fact that fundamentally impact the memo’s accuracy.”

While Congress’ behavior in trying to discredit the FBI is unprecedented, President Trump’s interest and efforts in stopping an FBI probe of the White House is not.

In June 1972, Nixon discussed with his chief of staff, Bob Haldeman, how to use the CIA to stop the FBI’s Watergate probe. The idea was to have the CIA director and deputy director assert that the FBI’s investigation threatened national security. Though he never explained his reasoning, Nixon thought CIA Director Richard Helms owed him and would comply. He also thought it was embarrassing enough to the agency that some of the Watergate burglars were connected to the CIA for Helms to follow through. In the end, the effort failed.

Nixon had selected L. Patrick Gray as FBI director following the death of J. Edgar Hoover, and also hoped that he could maneuver the FBI away from Watergate. He was Nixon’s man at the FBI. Gray provided Watergate-related documents to White House Counsel John Dean, who monitored the FBI in the cover-up. In 1972, Gray destroyed Watergate-related documents that he had kept concealed for the previous six months. 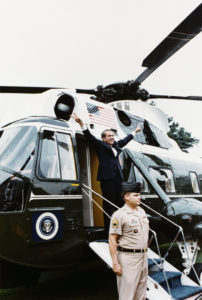 Nixon’s Oval Office tapes confirm his concerns. In June 1972 Chief of Staff Haldeman told Nixon, “The FBI is not under control, because Gray doesn’t exactly know how to control them … their investigation is now leading into some productive areas, because they’ve been able to trace the money.”

After his 1972 re-election and as the Watergate investigation closed in, Nixon then said about Gray, “I don’t believe that we oughta have Gray in that job … he’s too close to us.”

Incredibly, Nixon even pondered the idea (listen at 21 minutes into the tape) of naming Associate FBI Director Mark Felt as FBI director because “he’s a good man” and would be, as Haldeman commented to Nixon, “your guy” who would know how to pull the levers at the FBI.

What Nixon and Haldeman didn’t know was that Felt was busy leaking Watergate information to various reporters, including to The Washington Post’s Bob Woodward and Carl Bernstein as “Deep Throat.” He hoped to undermine Gray and eventually take the top FBI job for himself. This effort backfired, and Nixon had no idea that he had briefly contemplated making Deep Throat his FBI director.

In Nixon’s day, interfering with the FBI happened out of view and behind the scenes.

Today, Trump’s concerns with the FBI’s investigations are blatantly public. He has allies in Congress who share his concerns about the FBI. Nixon had no such congressional committee backing him.

Where this ends, we do not yet know. Given FBI Director Wray’s pushback, will Trump seek a more compliant FBI director in the mold of Gray?

Current events have the feel of a pending political and Constitutional crisis perhaps not too dissimilar from Watergate in the 1970s.