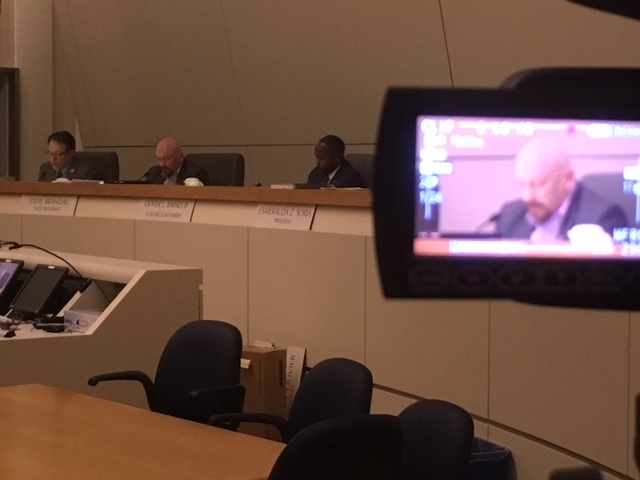 Is Steve Brandau worried about losing his conservative street cred?
How else would you explain his excoriating of legal advocates for the poor from the city council dais?
Thursday night (Jan. 25), the Fresno City Council debated whether to approve a 2 million-square-foot industrial park project. The result was so obvious, even the New York Times could accurately predict it.
The only drama that remained was whether it would be a unanimous vote (it was, 7-0).

Whatever happened to compassionate conservatism?


“I apologize for the comments that are disrespectful.” — Fresno City Council President Esmeralda Soria
Council President Esmeralda Soria harshly scolded Brandau, two seats to her right. All Oliver Baines could do in the middle was rest his chin in hand.
Soria termed Brandau’s remarks inappropriate and uncalled for. The two then argued, raising their voices over each other.
“I apologize for the comments that are disrespectful,” Soria said.
“Well, I don’t apologize for those comments,” Brandau snapped back.
Brandau didn’t like that Soria apologized on behalf of the council.
“I’m apologizing on my behalf, because I do represent this council,” Soria said, anger rising in her voice.
“Fine. I represent this council,” Brandau retorted. “She is not apologizing for me.”

After the meeting, I asked Werner if she was a poverty pimp.
“I don’t even understand what that means,” Werner said. “What he did tonight was shameful.”
Brandau, however, felt good about the exchange. In fact, he was darn proud of it. Not since the WWE’s Barry Horowitz has someone patted himself on the back so vigorously.
He either tweeted or re-tweeted GIFs and memes demonstrating his bravery.

But as the wise pro wrestling legend Gorilla Monsoon once said, a pat on the back is 12 inches from a kick in the pants.

Anyone Notice a Trend Here?

Maybe Brandau is taking the lead from Mayor Lee Brand.
He told Tim Sheehan of the Fresno Bee:
“The poor need advocates, but they need to choose their battles, and this isn’t the right battle to pick. These advocates are empowered by poverty. My job is to get people out of poverty. This is an opportunity to get people out of generational poverty.”
Our City Hall leaders like to pick on the people who stand up for the poor.
Who’s next? The crippled?

What Is Cupping? Glad You Asked.