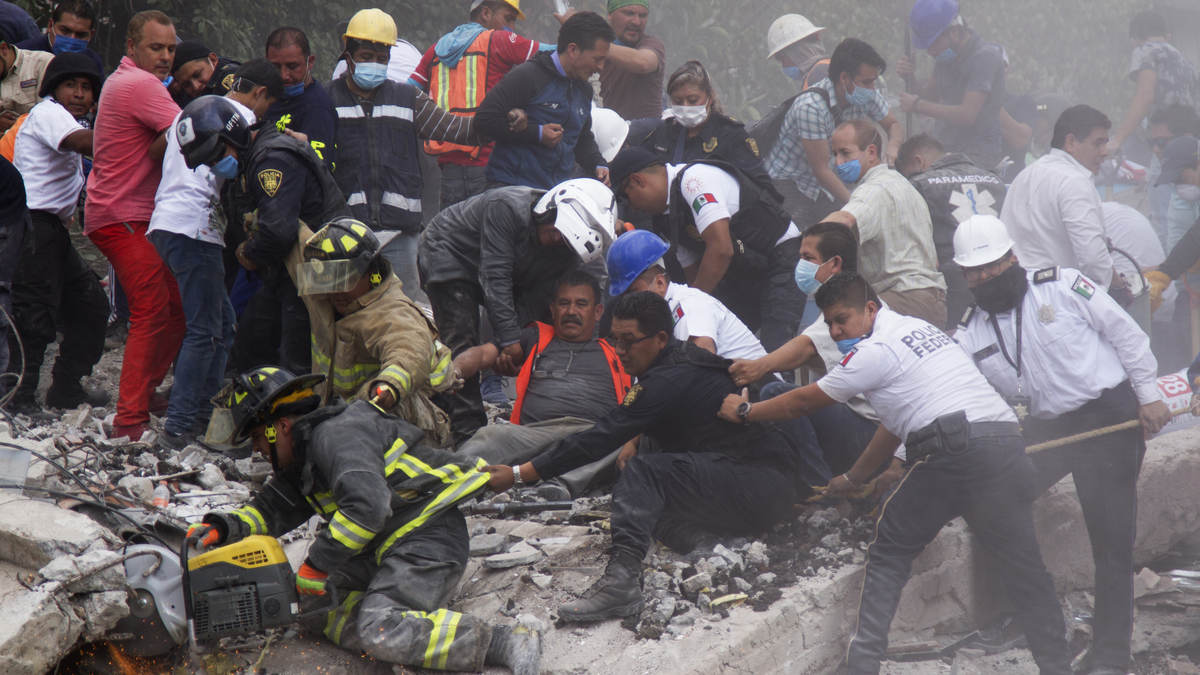 Opinion by
Catesby Holmes, The Conversation

With three runaway governors, two deadly earthquakes and one Donald J. Trump – not to mention an average 69 murders a day – the past year has been rough on Mexico.
As Americas editor, it has been my job to bring expert analysis of these painful events to an international audience throughout 2017. Admittedly, it wasn’t my favorite task: I have lived and worked in Mexico on several occasions, and it’s hard to see a country that feels like home struggle so much.
So, to commemorate the end of a very bad year, here are seven articles that lay out why 2017 was so terrible for Mexico — plus one slightly rosier perspective.

On Jan. 21, 2017, the United States inaugurated as president a man who throughout his campaign attacked Mexico on Twitter and in person.
So it was unsurprising when, six days into his administration, Donald Trump’s first international crisis was a diplomatic standoff with Mexico.
It all played out – where else? – on Twitter. After signing a series of executive orders cracking down on immigration, the U.S. president threatened to repeal the North American Free Trade Agreement, tweeting that Mexico had “taken advantage of the U.S. for long enough.”
President Enrique Peña Nieto, who had previously welcomed candidate Trump to Mexico, stayed calm early on. At first Peña Nieto’s plan for dealing with the U.S. president’s belligerence was “to respond to his hostility with conciliatory gestures and goodwill,” says political commentator Carlos Bravo Regidor.
But then Trump tweeted that he would cancel an upcoming meeting with Peña Nieto if Mexico refused to fund the construction of a “badly needed” southern border wall.
“Even for mild Peña Nieto this was too much,” comments Luís Gómez Romero, a political scientist at Australia’s University of Wollongong. Mexico’s president canceled his meeting with Trump on Jan. 26 – not with a press conference but, yes, via Twitter.

Nature brought chaos to Mexico in 2017, too. In September, the country was rocked by deadly twin earthquakes.
The first, a magnitude-8.2 Sept. 7 quake, was the strongest to hit Mexico in a century. It killed nearly 100 people in the southern states of Oaxaca and Chiapas, in an area previously thought to be seismically inactive.
“The Tehuantepec region is actually one of the few parts of Mexico’s Pacific coast that had never suffered a major earthquake,” commented seismologist Luis Quintanar Robles, of Mexico’s National Autonomous University, after the disaster. Previously, scientists believed the Tehuantepec gap to be aseismic, or unlikely to cause a quake.
Weeks later, Mexico City was convulsed by a second earthquake, which toppled thousands of buildings and killed over 350 people. It was the country’s deadliest earthquake since a 1985 killer caused some 15,000 to 30,000 casualties in and around Mexico City.

Donald Trump wasn’t the only politician giving Mexicans a headache in 2017, says Luís Gómez Romero. Three state governors were arrested abroad while trying to escape justice.
Among them was Roberto Borge of Quintana Roo, home to the tourist mecca of Cancun. In June, he was apprehended in Panama after fleeing accusations of, among other crimes, using thugs to drive people out of beachfront hotels after illegally seizing the properties.
Meanwhile, former Veracruz governor Javier Duarte was detained for not only allegedly stealing almost US$3 billion from his home state but also for allegedly diverting health funds meant for children with cancer.
“Rather than receive the chemotherapy medication Avastin, the children were dispensed distilled water,” Gómez Romero explains.

By fall 2017, he says, fully 11 of Mexico’s 32 governors were under investigation or fighting prosecution for corruption. On Dec. 20, a high-profile ally of President Enrique Peña Nieto was arrested on charges of campaign-finance embezzlement.
Public malfeasance is “pretty old news in Mexico,” Gómez Romero says. But “by any measure, graft in Mexico has reached stunning new highs this year.”

Homicides did, too. With 20,878 murders reported by November, 2017 is officially Mexico’s deadliest year since such data was first published in 1997.
On average, 69 people are murdered and 13 “disappear” daily in Mexico. In one particularly bloody month, October 2017, there were 2,371 murders in 31 days.
“This nightmare of unremitting violence is inflicted by both criminal organizations and agents of the Mexican state,” writes Gómez Romero, who attributes the country’s high homicide rates to the government’s 11-year war on drug cartels.

To tackle crime, in December Congress approved legislation allowing the Mexican military to take over law enforcement duties. Security analysts and human rights advocates strongly opposed the Internal Security Law, saying it will only increase casualties.
When the idea was first floated back in April, Gómez Romero wrote a scathing assessment that credited the military – a “lethal killing force” – for the drug war’s already unacceptable death toll.
After the Internal Security Law’s hasty congressional approval in December, which has triggered protest in the country, Gómez Romero commented that “the militarization of Mexico [is] a painful episode” for Mexico.

Violence and corruption have turned many Mexicans against President Peña Nieto, whose approval rating hit 26 percent by November 2017. This voter anger is shaking up Mexico’s 2018 presidential campaign, notes pollster Salvador Vázquez del Mercado.
“Mexico’s 2018 campaign season has not officially begun, but the race for the presidency is already a nail-biter, featuring a powerful ruling party, dozens of independent aspirants…and very strange bedfellows,” he observes.
To defeat Peña Nieto’s incumbent PRI party, numerous right- and left-wing parties have teamed up to form coalitions that Vázquez del Mercado calls “ideologically incoherent.”
Resistance to these strange alliances, both within parties and among the citizenry, has been fierce.

Concern about the Trump presidency also unsettled Mexico’s economy. The peso dropped 15 percent after the U.S. election, hitting a modern historic low value of 21.95 pesos to the U.S. dollar by late January 2017. It took six months to recover.

Mexico’s economy has suffered from Trump’s attacks on NAFTA, which he has called “the worst trade deal ever.” Talks are now underway to renegotiate the 33-year-old agreement between Canada, the United States and Mexico.
While Mexico has benefited hugely from reduced tariffs on its exports to neighbors, reshaping NAFTA may actually have some upsides for the country, say Asit Biswas and Cecelia Torjada of the Institute for Water Policy at Singapore’s Lee Kuan Yew School of Public Policy.
NAFTA has been good for American farmers but rough on their Mexican counterparts, depressing domestic agricultural production. That, in turn, has endangered Mexico’s ability to grow enough of its own food.
Fearing a NAFTA repeal, the country is now diversifying its trading partners, offering U.S.-style favorable terms to Argentina, Brazil and other major agricultural exporters. It is also trying to help Mexican farmers produce more crops.

“Mexico has more policy options than it thinks,” say Biswas and Torjada of a NAFTA rewrite. “And it may have less to lose than its northern neighbor.”
Catesby Holmes is Global Affairs Editor for The Conversation
This article was originally published on The Conversation. Read the original article.

How the Religious Right Is Shaping U.S. Politics

Newspapers Are to Blame for Holiday Suicide Myth