From Internet Trolls to College Dropouts: Our 6 Favorite Charts of 2017 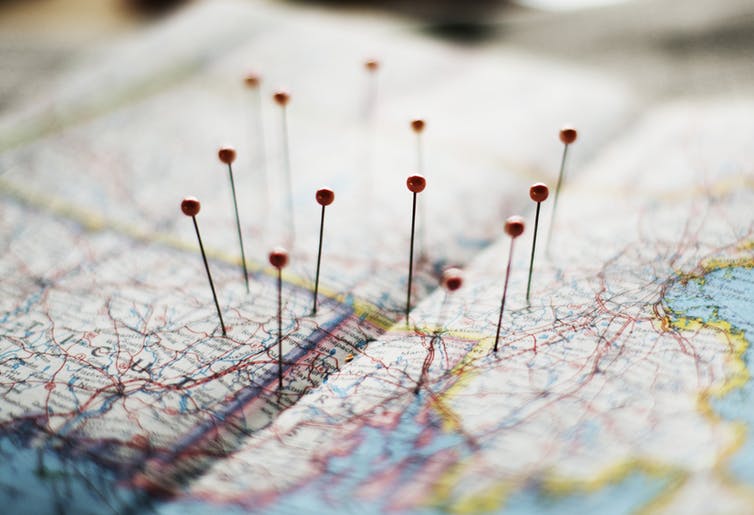 Editor’s Note: As the year comes to an end, we rounded up some of our favorite graphs and maps from archival articles The Conversation published in 2017.

America may be getting richer, but who’s reaping the reward? The economic gap in the U.S. has widened over the past few decades. Today, the top 10% of U.S. households control over three-quarters of the country’s wealth.
But as inequality gets worse, something curious happens: More and more people think that they actually live in a meritocracy.

“People on either side of the income divide cannot see the breadth of the gap that separates their lives from those of others,” explains Jonathan J.B. Mijs at Harvard University. “As the gap grows wider, other people’s lives are harder to view. Rising inequality prevents people from seeing its full extent.”

What do Steve Jobs, Bill Gates and Mark Zuckerberg have in common? They’re all massively successful tech icons – and they all dropped out of college.
Dropping out is a well-worn trope in modern stories of business success. But a study of 11,745 U.S. leaders shows that dropouts like Zuckerberg are outliers. Ninety-four percent of the leaders attended college, about half at an elite school like Princeton.

“Perhaps in the future, college may not be as important to employers,” write the researchers at Duke University and Chemnitz University of Technology. “But for now, college dropouts who rule the world are rare exceptions – not the rule.”

Hollywood has fielded criticism in recent years for a lack of diversity on the silver screen. In 2016, 7 in 10 speaking roles went to white actors.
What’s more, a study of over 800 top movies suggests that the best earners at the domestic and international box offices tend to have white leads and majority-white casts.

Roberto Pedace at Scripps College suggests that studios may be pandering to prejudiced consumers, as movies with diverse casts can struggle abroad: “The revenue implications of international audience preferences are simply too large for studios to ignore.”

4. Big Business in the Big House

The number of prisons in the U.S. has more than tripled since 1970. Roughly 70% have been built in rural communities – largely in southern states like Florida, Georgia, Oklahoma and Texas.

Prisons can be a means of survival for struggling communities, writes John Eason at Texas A&M University. “Prisons provide a short-term boost to the local economy by increasing median family income and home value while reducing unemployment and poverty.”

5. Opioids by the Numbers

About 64,000 people died of drug overdose in the U.S. in 2016 – many from heroin, fentanyl and other opioids.
Oxycodone, a semi-synthetic pain medication, is one of the most commonly prescribed opioids in the U.S. In fact, U.S. per capita oxycodone consumption is much higher than other developed nations.

Andrew Kolodny at Brandeis University says that overprescription is one of the driving causes of the epidemic. “Until opioids are prescribed more cautiously and until effective opioid addiction treatment becomes easier to access, overdose deaths will likely remain at record high levels.”

6. The Trolls Among Us

The internet can be a nasty place. Take a trip into the comments section under a news article or YouTube video, and you might see name-calling, graphic threats or even hate speech.
Who’s posting this stuff? A study of millions of comments on CNN.com suggests that almost anyone can be pushed to troll others – under the right circumstances.

According to the team’s research, negative comments peak late at night and on Mondays.

What’s more, the more troll comments there are in a particular discussion, the more likely future participants will also troll. As the authors at Stanford University and Cornell University write, “Many ‘trolls’ are just people like ourselves who are having a bad day.”
About the Author
Aviva Rutkin is Big Data + Applied Mathematics Editor at The Conversation.
This article was originally published on The Conversation. Read the original article.

Convert, Leave or Die — What Happened to American Dream?