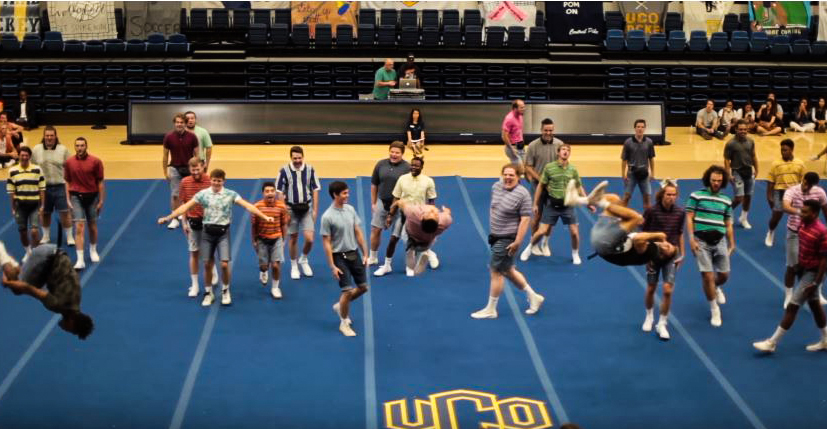 I remember this short-lived extra-curricular activity I did in my sophomore year at Sunnyside High School. It was cheerleading.
It was not my most highlighted talent. But I tried it to fulfill my mother’s dream of blossoming into a beauty queen who wore skirts and dresses and wanted to shop for make-up with her.
Instead, I was stuck learning how coordinate my body to move with 15 other girls.
Mom’s hope for me was that dancing around in a mini skirt and wearing blue eye-shadow would make me feel like a young lady.
There’s something else I need to share with you. Our cheer team tried recruiting a few guys to be part of the team. We needed them to toss us girls in the air.
We were extremely unsuccessful in our recruiting efforts. That was because there was a stigma about guys being cheerleaders back then.
The guys wanted to be guys and wanted to play sports throughout the season. They wanted to look at the cheerleaders — not be one.

These Boys, However, Take Cheerleading to a New Level for Special Olympics.

Which brings us to the University of Central Oklahoma’s Sigma Tau Gamma all-male cheerleader team.
Sigma Tau Gamma displayed an epic cheer and dance routine during their Homecoming Competition and received an abundance of appreciation for it.
In the video, the fraternity had their peers screaming and shouting with their elaborate flips. They’ve now won the competition two years in a row. Simply said, they’re a helluva lot of better at this cheerleading stuff than I ever was.
Sigma Tau Gamma’s Jared Kalani Palmer and fraternity brothers started a GoFundMe account the day after their performance to benefit the Special Olympics.
“We typically host an event for Special Olympics two weeks before spring break,” Palmer told me. “So in order for us to be able to plan far enough in advance, I guess we would evaluate where we are around Jan. 1.”
So, why not make this New Year’s Day extra special for Palmer, the rest of the boys at Sigma Tau Gamma and Oklahoma’s Special Olympics participants?
Go to this link to donate.
(Roe Borunda is an associate producer for GV Wire. You can contact her via Twitter, @roetography, and on Facebook.)