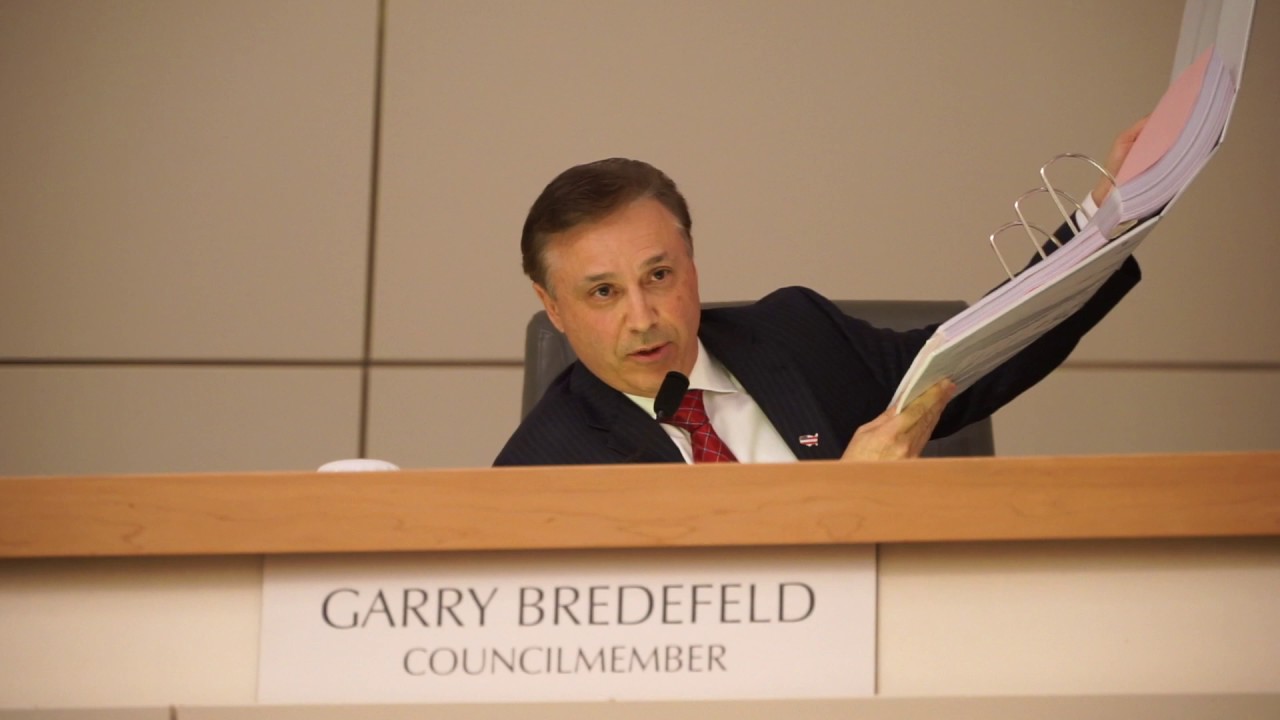 OPINION BY BILL MCEWEN
People inside and outside of Fresno City Hall have been asking, “What’s up with Garry Bredefeld?”
There’s speculation, too, that Bredefeld has his eyes on higher office. A challenge to Mayor Lee Brand in the 2020 election? A seat on the Fresno County Board of Supervisors?
Conventional wisdom justifies such speculation. As the theory goes, no one takes on — and seemingly welcomes — as many hot-button issues as Bredefeld does unless they want to raise their profile for a future campaign.
Until recently, my answer to the first question in one-on-one conversations was consistent: I don’t recognize this version of Garry Bredefeld. He’s not the same guy I covered on the City Council back in the late 1990s.
Then in an interview with Valley Public Radio’s Joe Moore on Aug. 29 I went public with my opinion. Almost immediately, the councilman placed calls to Moore and me.
Bredefeld and I met for a face-to-face interview. His message was straightforward: I’m the same guy I’ve always been. I have no political aspirations beyond serving the people of District 6. And I take on issues that are important.
“I’m not any different, but society is,” Bredefeld said. “Running for higher office? I don’t even think about it. Of course, when things get high profile, people assume all kinds of motives.”

In God We Trust Resolution

What about Bredefeld’s successful effort to get “In God We Trust” displayed in the council chambers? That divided the community and it’s not the kind of thing that moves Fresno forward on challenges like improving the economy or cutting crime.
“I thought it would be easy to get it passed. It wasn’t an easy one,” Bredefeld said. “We’ve taken God out of schools and our other public institutions, and that’s the direction we’ve been going with so many things. That needs to change.
“The people who say I should focus on other things ignore that I am working to make Fresno more business friendly, build more parks and improve public safety. ‘In God We Trust’ and these things are not mutually exclusive.”

Bredefeld does say that one big thing in his life has changed. He’s a cancer survivor. That often changes a person’s perspective.
“Having battled cancer, my main motive is to stay healthy,” he says.
Forgotten by many people perhaps is that he first announced his political comeback in late 2015. Then he pulled out of the District 6 race because, as he explained in an email to The Fresno Bee, “I’ve decided that I need to continue focusing on my physical recovery and subjecting myself to what would likely be a nearly year-long campaign would not be wise.”
A week later, Bredefeld was back in the race to succeed termed-out Lee Brand, saying his doctors told him he was perfectly healthy.
“It’s about pursuing your beliefs, your passions,” he told The Bee. “Not looking over your shoulder. I should be living fully, not cautiously.”
In typical Bredefeld fashion, he threw all of his energy and political savvy into the race. He passed on hiring a political consultant, called all the shots himself, mastered social media and romped to victories in the primary and run-off. Along the way, he upset the local Republican establishment and their concerted efforts to paint him as a Republican In Name Only, anti-business and largely responsible for the building of a downtown baseball stadium that they say is a drain on the General Fund.
Bredefeld deftly shot them down. More important, the local GOP and the other candidates badly underestimated the bond that Bredefeld had with northeast Fresno constituents. Voters remembered how he had battled developers and urban sprawl — and successfully thwarted efforts to turn prime corners into liquor-selling convenience stores. They appreciated his bulldog tenacity.
“My position is the same as it was then,” Bredefeld said. “I am not anti-business or anti-development. We need to grow or we will stagnate. But the growth should be sequential and the negative effects must be mitigated.”
As to Bredefeld’s relationship with fellow councilmembers and Mayor Brand, he answers: “I look forward to collaborating whenever we can. But when something is brought up that I disagree with, I’m not going to stay silent.”

Society and Politics Have Changed

Bredefeld is right when he says society has changed. Politics have changed, too. The stadium debate, stopping violent crime and arguing about development policies consumed much of the council’s time during Bredefeld’s first term (1997-2001). Now the council is wrestling with a wide array of controversial issues that are being debated in cities and legislatures throughout California and the nation: marijuana, sanctuary cities, gun control and officer-involved police shootings, to cite a few.
And something else is different. The rise of social media has given Bredefeld a megaphone that enables him to bypass the gatekeepers of the past. His voice has always been loud, it’s always been largely conservative but unpredictable and it’s always been backed by moral certitude. He’s the perfect politician to exploit Twitter, which he does frequently.
He rocked the boat back in the day, and he’s rocking the boat now. A staunch advocate for police officers and enforcement of immigration laws, he nonetheless won’t attend the Fresno appearance of former Maricopa (Arizona) County Sheriff Joe Arpaio, who is regarded as an icon by some conservatives.
Arpaio was recently pardoned by President Donald Trump for a federal conviction for violating a court order to stop racially profiling Hispanic drivers and pedestrians. Arpaio is coming here for a Fresno County Republican Party fundraiser.
“I support the Republican Party, so I am going to write a check,” Bredefeld said. “But I won’t go. Arpaio profiled and abused his powers as sheriff.”
That quote is vintage Bredefeld.
I stand corrected.

Who is a Dreamer? Nancy Wants the World to Know