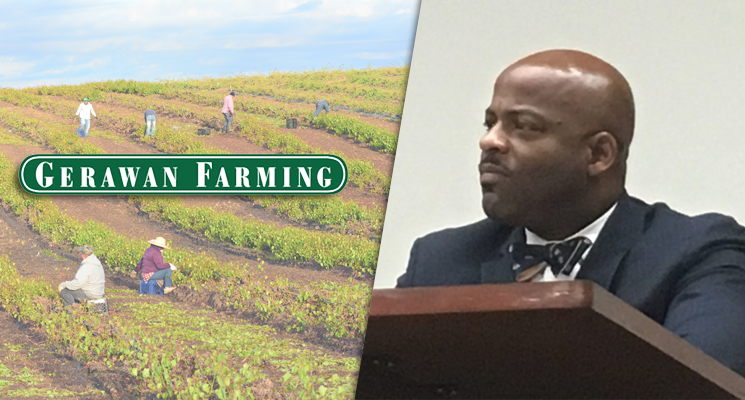 The identity of the witness behind Agricultural Labor Relations Board (ALRB) member Isadore Hall’s alleged threats against those who oppose him has been revealed.

Because of the anonymous nature of the incident between Hall and the witness, de Leon and Governor Brown dismissed Vidak’s calls to halt Hall’s appointment to the ALRB. Now, in a new legal filing by Gerawan Farming, the witness is named as Shaun Ramirez, an employee of Specialty Crop Company in Madera.

According to its website, Specialty Crop Company is the “largest grower of fresh and dried figs in the world.”

Ramirez declined an interview request from GV Wire through Specialty Crop Company founder Kevin Herman. Ramirez is listed as a food safety/safety coordinator in a 2015 news release by the California Ag Leadership Foundation, of which he was a fellow.

The legal battle between Gerawan vs. ALRB

The legal wrangling over a controversial Agricultural Labor Relations Board member and Gerawan Farming continued with the latest round of motions and decisions. The Fresno County fruit grower wanted Isadore Hall III disqualified from deciding future Gerawan cases in front of the board. They argued his prior actions as an elected member of the state legislator would bias his decisions.

The ALRB disagreed denying the motions.  One of the three members to make that decision was Hall himself.

Gerawan’s fight with the farm union United Farm Workers has lasted four years. The ALRB is the state agency that helps settle those disputes. Hall was appointed to the board in January by Governor Jerry Brown and confirmed by the state senate in April.

In an April 28 motion, Gerawan asked the ALRB to disqualify Hall from hearing three Gerawan cases because his “previous actions and statements demonstrate bias and lack of impartiality as to the specific facts in this dispute. Member Hall’s participation in a protest and march in support of a UFW-sponsored resolution adopted by the Los Angeles City Council is a matter of public record. His advocacy on behalf of the UFW and against Gerawan as to the factual and legal matters in the Decision reflect his prejudgment of the precise issues now before the Board.”

The incident referenced was an October 22, 2014 rally in Los Angeles to persuade the Los Angeles City Council resolution against Gerawan in their fight against UFW. The council voted 12-0 to support the union.

Gerawan’s attorneys provided photos of Hall waving a UFW flag and posing with UFW President Arturo Rodriguez, among others. They also presented social media comments made by Hall praising the farm workers. They further argued that his participation in the rally should result in a disqualifying bias.

Perhaps the most damaging, yet incomplete,  piece of evidence was Vidak’s letter to de Leon, describing an anonymous witness’ account of an interaction with Hall on February 28, 2017, the night before his Senate Rules Committee confirmation hearing. The witness claimed Hall vowed to “get” farm groups that opposed his confirmation.

Attorneys from UFW and the general counsel of ALRB filed motions in opposition. UFW’s rebuttal to pictures of Hall and UFW supporters claimed it did not constitute an endorsement:

“[T]hey were taken for and posted on the UFW web page, for the purpose of promoting UFW, not to chronicle Hall’s activities during the march. As a politician on campaign on the day of the march (at which various other organizations and public figures were also present, according to Decl. of [Gerawan attorney David] Schwarz, Ex. C), Hall would have stopped to engage in amicable photo opportunities and handshakes with many different people and groups that day.”

As far as Vidak’s letter, UFW called it vague and hearsay.

The UFW concluded: “Isadore Hall was a (Democrat) politician on the campaign trail, engaging in photo opportunities and being friendly with organizations, individuals and public figures who would support him.”

In the ALRB General Counsel’s opposition, they note that Hall’s actions at the rally were “perceived bias” not “actual bias.” They wrote there was no evidence that Hall prejudged Gerawan. They also note that Hall did not speak at the rally or even attended the city council hearing.

ALRB presented evidence of more photos from the October 2014 rally, showing pictures of speakers, marchers and city leaders. Some featured Hall, but many did not. The point was that other labor unions attended the event as well, just UFW.

In the next legal filing, Gerawan included a declaration of the anonymous witness, detailing his interaction between himself and Hall. However, the identity was still kept a secret, stating in a May 9 brief “this declarant has request anonymity, based on his fear that he (or his employer) will be targeted by the ALRB, the General Counsel, or the UFW for coming forward with this evidence.”

“I first talked with Isadore Hall, at the reception party that evening, and he had told me he would like to further speak with me, about my views on worker issues in agriculture. I gave him my business card, and figured we would speak again, in the future.”
“Later that evening as I left my room in the Hyatt Regency Hotel, I came across a group of members from the Fresh Fruit Association, and as I came upon them realized they were speaking with Mr. Hall. I heard Mr. Hall cussing quite a bit, being very loud, and decided I would not stay, nor get involved in the discussion going on.

“So I ordered a drink, and as I was going towards the back exit to smoke a cigarette, when Mr. Hall walked out in front of me. We sat across from each other, and I mentioned “well that sounded like a fun conversation”. His response was “yeah those mother**** don’t know me.

“He then asked me who was Gerawan. I told him it was a farming company in the Central Valley, whose employees, have been trying to get their ballots counted to decertify the UFW.

“Mr. Hall and I spoke for about 15 minutes, after this, about how he got involved in politics, and he informed me he was from Compton, and these types of things, and people don’t intimidate him what so ever. As we finished our conversation I asked him if he had a business card, in which case I could contact him, but instead he gave me his personal cell phone number, in which I called, then hung up so he could have my number, and I have his. That number is (310) *****. We spoke in a friendly, manner, which was not confrontational, whatsoever.”

[In an aside, the initial brief included Hall’s full phone number. The ALRB admonished Gerawan’s attorneys for the perceived error. Attorneys then filed a redacted copy, despite their claim that Hall’s cell phone number was public information.]

No DQ for Hall

On May 18, the ALRB returned with their decision: Hall would not be disqualified and allowed to hear Gerawan’s cases. They sided with the UFW and ALRB General Counsel arguments that Hall’s actions at the 2014 rally did not constitute bias:

[I[t is clear that Gerawan not only greatly exaggerates the extent of then-Assemblyman Hall’s involvement in the October 2014 labor rally, but also that Gerawan assigns an unreasonable level of significance to Mr. Hall’s actions.

Member Hall’s past political activities, affiliations, and professional relationships, and the inferences Gerawan draws from them, do not constitute evidence of actual bias or an unacceptable probability of actual bias that would mandate Member Hall’s recusal in this case.

The ALRB’s decision also highlights some of the specific cases Gerawan’s attorneys cited in its brief to prove bias, noting that those referred to bias because of financial interest, not political.

As far as the anonymous declaration, the ALRB called it “inadmissible hearsay.”

If the ALRB granted Gerawan’s motion, it would put itself in a quandary, according to Gerawan. The state allows up to five ALRB board members. Currently, only three serve, including Hall. If Hall was not allowed to decide on Gerawan cases, the board would not have quorum and thus would be unable to render a decision. The ALRB also questioned that legal theory in its denial.

So, now Gerawan is trying again, filing a motion on May 23 for reconsideration, this time with the witness’s name revealed. In the brief, Gerawan says Shaun Ramirez’s name was redacted as part of an agreement between Ramirez, his employer, Specialty Crop Company and Gerawan.

When Mr. Ramirez offered to testify as to his conversation with Mr. Hall, he did on the condition that Gerawan agree not to reveal his identity or that of his employer. (Schwarz Dec., Ex. A.) That agreement was made on May 8, 2017, the day before Gerawan filed the redacted copy of Mr. Ramirez’s declaration. {Id.) After reviewing the Board’s decision, Mr. Ramirez and his employer agreed to allow Gerawan to reveal Mr. Ramirez’s identity. {Id. at Ex. B.) Mr. Ramirez’s identity constitutes “an intervening change in the law or evidence,” which the Board has previously stated would constitute grounds for reconsideration.

The evidence presented includes another copy of Ramirez’s declaration of his February 28 encounter with Hall (this time with Hall’s phone number redacted from the start), and a copy of correspondence and a contract between attorneys from Gerawan and Ramirez.

Gerawan is also requesting an immediate stay (halt) to any decision, pending the outcome of its new Motion to Disqualify.

May 8 & 9: The ALRB [accompanying declaration] and UFW file opposition motions.

May 9: Gerawan files a reply, including a declaration from an anonymous witness to Hall’s alleged threats against those who oppose him.

May 23: Gerawan files a motion to reconsider, this time revealing the witness to Hall’s alleged threats. [accompanying declaration]