Gus and Cara are Back in the Neighborhood 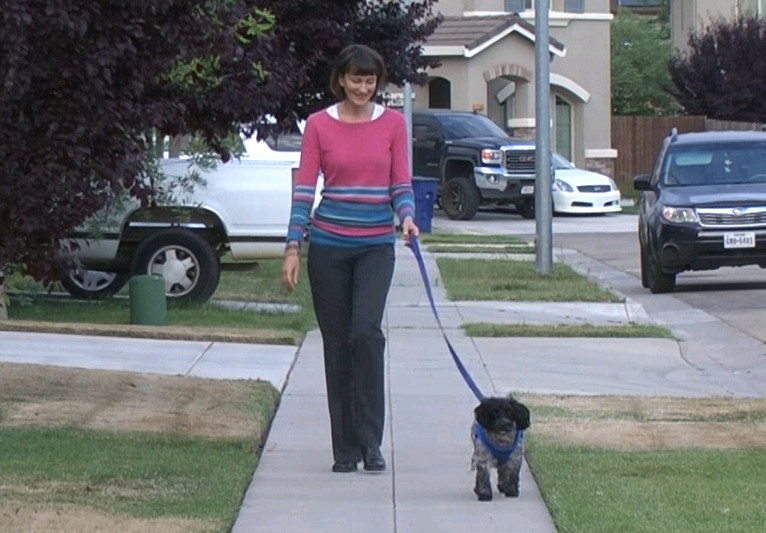 Cara Emes and her dog Gus are on the mend.

The physical wounds of Cara and Gus are healing. One week after being attacked by a pitbull during a morning neighborhood walk, Cara cannot leave her home without taking a can of bear mace. Instead of strolls around the neighborhood in East Central Fresno, it is short walks up and down her street.

“He’s mostly himself. He seems to be not just physically but emotionally making a really good recovery. I’m incredibly grateful,” Cara says.

Cara says there have been some lingering effects with Gus. “He sometimes hides in the back of the closet. He never did that before.”

It was the intervention of a sheriff’s detective, Jeff Stricker, who just happened to be in the neighborhood and made the rescue.

One week later, Cara says she is recovering physically from her bites and all around soreness. “The actual experience was quite traumatic: the visual, the sound, the length of time it went on. I’m doing what I can to heal myself emotionally, take good care of myself,” she says. “We want to get back to walking in the neighborhood at some point. So far, we’ve walked a little bit in the street. Even when I do that, I’m quite vigilant. Even though this was a rare experience, I can tell I’m quite on guard after what happened.”

The irony is that Cara is a psychologist in a private practice. “A lot of my patients have met Gus. When they saw his picture or they saw me, they were distraught. There has been an element of responding to my patients, current patients and former patients who reached out to express concern and care.”

Some of that care is for herself. Cara spoke with one of her psychologist colleagues. “We are all human,” she said of seeking her own therapy.

The owner in last week’s attack has come forward, and apologized to Cara. “He is shocked and doesn’t understand how this happened,” Car said. The pitbull apparently escaped from the yard about two blocks away from where the incident happened.

A spokesman from the Central California SPCA tells GV Wire. That dog will be returned later this week pending modifications at the home and fines paid. That worries Cara.

“For me personally, I don’t think I could feel safe in my neighborhood knowing that this dog is in the neighborhood because of the potential for it to happen again,” Cara said, fighting back tears.

As of now, no criminal charges are pending. Cara is considering her options when it comes to civil legal matters.

From FUSD to a Medical Degree