Will Fresno Trust in God? 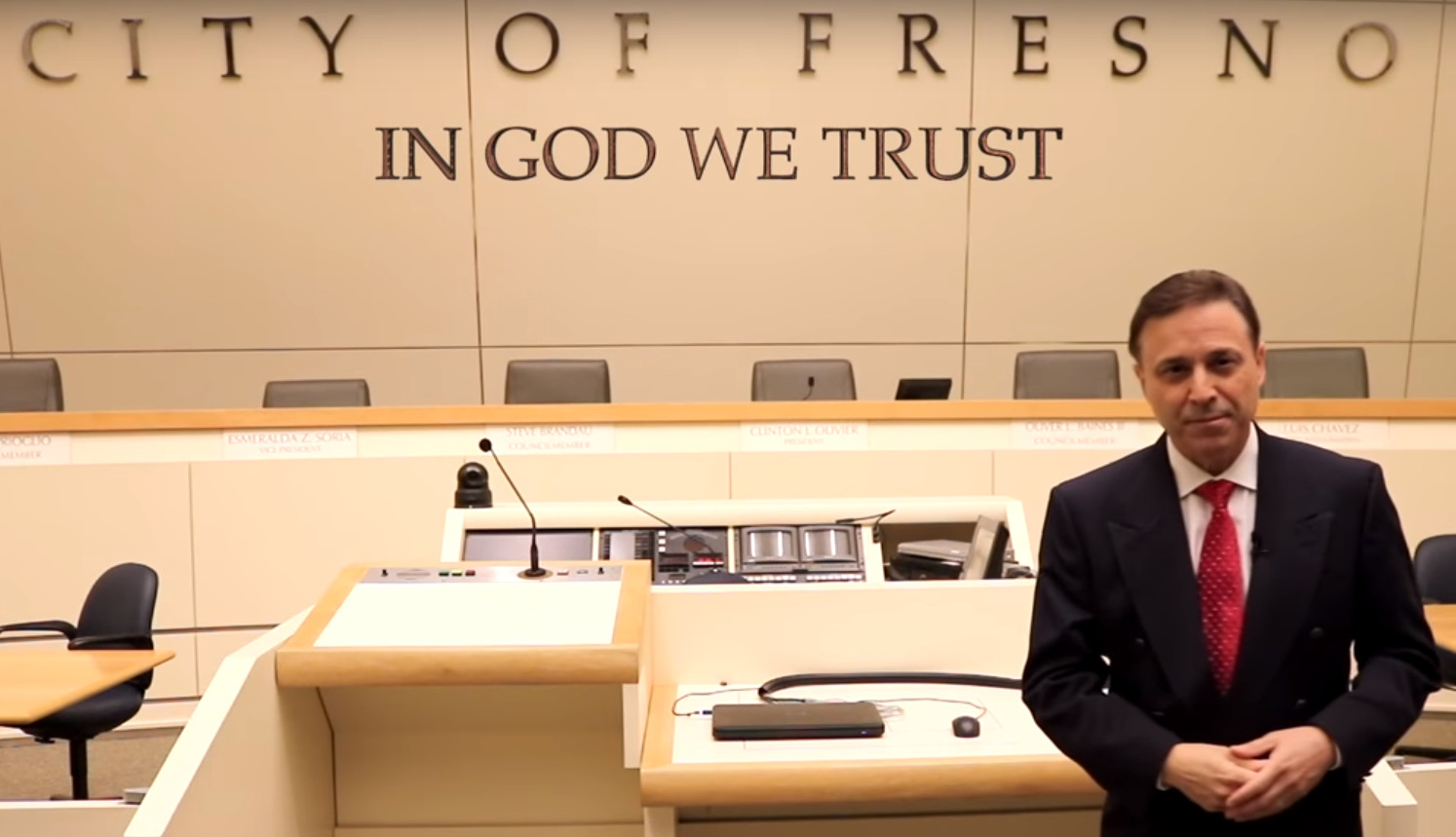 The phrase “In God We Trust” became America’s national motto by act of congress in 1956. It appears at the chambers of the United States House of Representatives. It has appeared on coins since the Civil War. Now, one city councilman wants that motto prominently displayed at Fresno council chambers.

Bredefeld’s inspiration came after a Bakersfield councilwoman sent Bredefeld an e-mail about the idea, as seen in this video created by the sixth district councilman.

“This is great for Fresno. This would be another tremendous thing we do. Fresno would be the latest and largest city in the state of California to do this,“ he says.

He is not fazed by the threat of potential legal battles that may come with such a motto. “This has been litigated. This is not about bringing religion into the public square. This is about supporting our national motto,” Bredefeld says.

It asks the city “to defeat the proposal put forth by Councilmember Bredefeld, and if the Council would see fit, to substitute ‘…and justice for all…’ if anything at all needs to be added to that wall.”

Among the signers is Rabbi Rick Winer of Temple Beth Israel.

“The house of the city is a house for all people. Some of our people are non-theist.  I think it becomes unnecessarily divisive,” Winer says.

It is a sentiment echoed by Reza Nekumanesh of the Islamic Cultural Center of Fresno, who also signed the letter.

Bredefeld disagrees. “There are many people, including myself, who think it means something. It’s our national motto and we ought to have it in our city hall and the people’s chamber. If people don’t support it, that is their right not to do so. But, it doesn’t exclude anyone. In fact, ‘In God We Trust’ is a very inclusive phrase.”

Jim Franklin, senior pastor at Cornerstone Church, is one of the religious leaders backing Bredefeld. “It’s not about taking away from someone. It’s not about being exclusive. In reality, these are the common things that bring us together as a country that we can unite around. I’m not saying that anyone has to give up their religion. We want to be respectful of everyone’s religion.”

“In God we trust,” Rabbi Levy Zirkind of Chabad Fresno says in support, while finishing with the old joke “and all others pay cash.”

Esmeralda Soria represents District 1 in the western side of town. She has yet to commit on a position. “I don’t have an issue with ‘In God We Trust,’ but I really want to hear from the community. I’ve asked a number of my constituents to weigh in and where everyone stands,” Soria tells GV Wire. She says she’s heard from both sides.

As for who will pay for the lettering to be added? “It will all be through private funding. No taxpayer money will be used for this because I didn’t want have anybody to be able to criticize us for that,” Bredefeld tells GV Wire.

The proposal is scheduled for debate next Thursday (May 11) at 4 p.m.