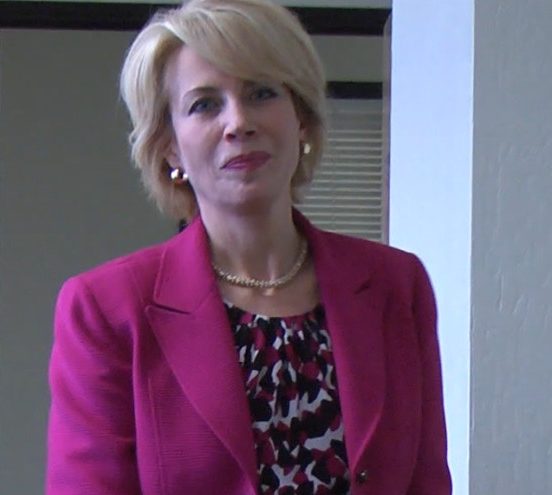 For eight years, City Hall is where Ashley Swearengin carried out her vision for what she felt was best for the residents of Fresno. No city leader is immune from criticism. And Swearengin was no exception. Whether it was cutting city staff and public safety to save the city’s coffers from ruin, public works projects like the Bus Rapid Transit and opening up of the Fulton Mall, Swearengin had her share of supporters and detractor.

The former mayor of California’s fifth largest city is now the executive director of the Central Valley Community Foundation, a sort of clearing house for donations.

“This is an exciting place. We have literally over 300 donors who are supporting over 600 non-profits and charities throughout the Central Valley and even around the world,” Swearengin says with a smile. The foundation has received about $100 million in donations over the last 10 years.

When Swearengin took office in 2009, the city was close to bankruptcy. Swearengin had to make tough calls to pull the city back from the financial cliff. Positions remained open. Public safety was cut, especially at the support staff level.

Swearengin says those decisions were tough. “Part of what was so hard was that every time we thought we hit bottom, the floor would drop out from under us again. You go through a round of budget cuts and it’s terrible,” she said.

The transition from City Hall to the private sector has been smooth for the former mayor. “It’s been very peaceful. Things are really busy here, but it’s a different kind of busy,” the mayor says once again with a smile. “I get up every day just as excited to come to work here as I was at City Hall.”

She appreciated the fact her children were protected from scrutiny. “They still see mom really busy, working pretty long hours. I’m grateful to Fresnans for leaving my family out of it when I needed to do the hard things and take a couple of punches.”

When Swearengin took office, her husband Paul was a Fresno sportscaster with a daily radio talk show. While he is not fully out of radio, he has been busy as a pastor at The River ministries in town.

Among the accomplishments Swearengin lists when prompted: drought-proofing the city, water infrastructure projects, fixing the city’s finances to prevent bankruptcy, downtown projects like the Fulton Mall and Bus Rapid Transit.

“Time will tell. It is for other people to decide, not me,” Swearengin continued. “What I wanted to leave behind was that we shouldn’t be satisfied with the status quo.”

The most difficult part was the fight to carry her agenda. “It’s not against a person or idea. Things are very difficult to move.”

Craig Scharton worked under the Swearengin administration and is an advocate for downtown Fresno. “She really is a person who not only said ‘I’m going to revitalize downtown’ but did a lot of the steps to do the work.”

Downtown Fresno was always an important aspect of the Swearengin administration. “It’s always been about the future of our city. If what happened over the last 60 years happened again over the next 60 years, there is no bright prospect for the city of Fresno. Literally, it is over for our city,” Swearengin says. “If you care about the future of our city and having a bright one, then you have to do something about the urban core.”

In part 2 of our feature on former Fresno mayor Ashley Swearengin, we get reaction to those who critiqued her during her tenure.