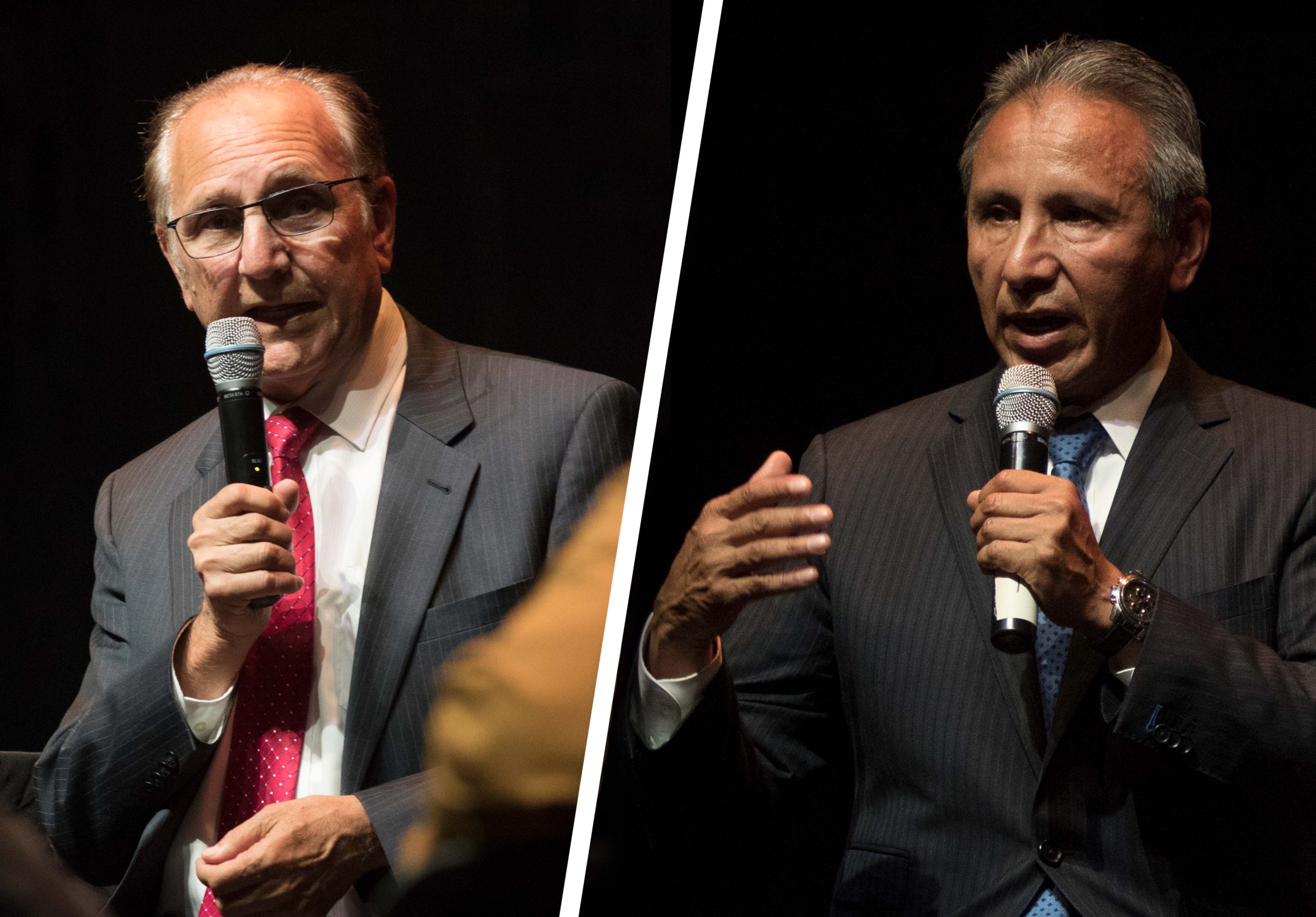 Meeting each other in their third debate in as many days, Lee Brand and Henry Perea met at Warnors Theater Wednesday night focusing on downtown issues. In a departure from the presidential debate, both men were calm and cordial in discussing the issues. They did not interrupt each other nor engage in personal attacks.

Among the topics was:

-prioritizing downtown redevelopment (it’s important to both of them)

-top downtown priorities: Brand said it was spending the $70 million in new cap and trade funds. Perea differed in wanting to hear from the public and possibly use those funds on southeast and southwest Fresno. Brand says he wants to spend those funds on something that will create more development mainly in downtown. The candidates bickered back and forth over the $70 million. Both want to encourage more developers to build. Perea also expressed the importance of connecting downtown with the Tower District.

-Supporting PBID (the downtown self-assessment district): Perea supports it; Brand supports it as well. Brand chastised Perea for initially voting PBID down at the county board of supervisors. Perea says he voted against it, but later at that seem meeting, after some changes to Perea’s liking, he supported it.

-Downtown development code. Brand supports the update in a hope to encourage developers. Perea said he has not looked into it thoroughly. He encouraged public input.

-Downtown as a tech hub. Both supported the concept. Perea also pumped up high speed rail, claiming it can take 55 minutes to get to San Jose. Brand said he was initially a skeptic of the downtown revitalization, but is now a believer. Both name dropped Jake Soberal and Bitwise as drivers of the tech revolution downtown.

-What the 2035 General Plan means for downtown. Perea said the plan is similar to one he dealt with during his time on council. He said he would follow the plan and a desire to help downtown and older neighborhoods. Brand attacked Perea’s past statements on building out in the Friant Corridor and Madera County and ignoring downtown. Perea said he too was once a downtown skeptic, but he believes. He mentioned “pushing the button” on the baseball stadium and courthouse. Perea said he would not sue neighboring cities. Brand retorted that Perea is inconsistent and his lack of support of the general plan hurts Fresno.

-Fulton Mall reopening to car traffic. He feels opening the mall will increase property values and draw national retailers. Perea sees it as a good thing for businesses, but wants to see more mixed-use projects.

-High speed rail. Brand said he was not a supporter, but his job as mayor is to benefit Fresno and wants the maintenance yard to be built the. Perea has been a champion of high speed rail all along. He said you shouldn’t have a skeptic running downtown, referring to his opponent.

-On Granville Homes selling its property downtown*. Brand respects the decision as a private business transaction. He agreed with Assemi about the difficulty with legal hurdles to jump and lack of infrastructure. Perea indicated that Assemi may change his mind. “It is for sale, it is not sold yet.” He continued saying he looks forward to future developments from Granville around town. Both praised Granville president Darius Assemi for his investment downtown.

-Future of Fulton Street. Perea says the high speed rail station will be the hub of downtown. He is optimistic about the future of downtown. Brand also sounded optimistic on future plans.

-Favorite downtown activity. Brand likes to eat at the variety of restaurants. Perea likes to bike and shop.

-Safety in areas of inactivity. Perea feels the energy of successful sections will carry over to others. Perea also said adequate lighting and security is important. Brand says it is a matter of perception, that a lot of northern Fresno residents do not know the real downtown. Brand lauds the activities such as the ice rink and a chili festival as drivers for more events.

-Run down or vacant properties. Brand says it is a problem throughout the city. He talked about his vacant building ordinance to improve the problem. He also feels more code enforcement would help. Perea wants to tackle slum and blighted properties. He mentioned Summerset Apartments, saying they should pay their $290,000 fine. Then, the candidates argued over what the definition of substandard housing is. Brand said it can be different to each code enforcement officer. Perea called Brand out for that comment. “Eight years and you don’t know what a dilapidated house would like?” Brand went on saying that there is no set standard of a dilapidated building.

-Approaching substandard housing. Perea does not believe in inspecting every apartment. He wants to focus on “the worse of the worse.” He said Brand wouldn’t go after them because he works with them. He would want to use the Housing Authority Section 8 model of inspections. Brand retorted than Perea’s record in the county under his leadership on the board of supervisors. He continued that the proper ordinances need to be in place to have fines match the severity of the violation (so weeds is not the same level as a hole in the roof). Brand would support a plan to allow a private third-party to conduct inspections throughout the city.

-Affordable housing. Brand says Fresno is one of the cheapest place to live. He says low wages are a major problem. He thinks a robust economy can fix the issues of poverty. Perea would target state and federal grants.

-Homelessness. Perea said when the city dispersed downtown camps in 2013, it spread the homeless throughout Fresno. He called for emergency shelters with the appropriate professional help to get them off the streets. Brand blamed Sacramento politicians, realignment, sex offenders and Prop 47 that contributed to the homeless problem. He talked about spending more on mental health professionals and drug counselors. He mentioned the issue of where would they put such an emergency shelter. Perea called out Brand for calling the homeless criminals. There are many who have fallen on hard times or substance abuse. Brand then reiterated his disdain for the criminal acts he says the homeless cause.

-Street cars. Brand called them inefficient and costly. Perea defended them as a great way to “move people from point A to point B.” He pointed out their success in San Francisco, Sacramento and abroad.

The candidates have four more debates on the calendar for next week.